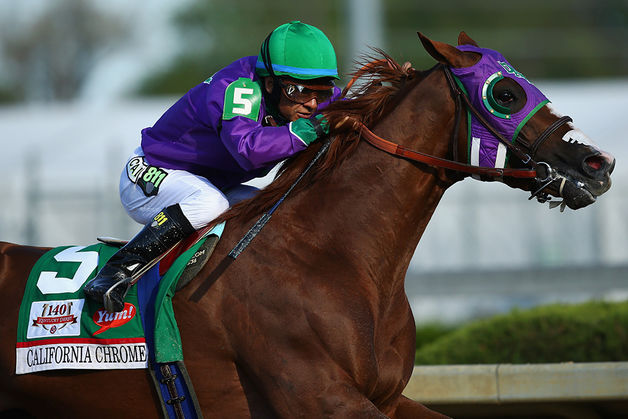 Horse Racing Betting News
A record 201 horses were pre-entered for next week’s 13 races that make up the Breeders’ Cup World Championships in Arcadia, Calif. The previous entry record was 194 entries in 2011, when the Breeders’ Cup was lat held at Churchill Downs and featured 15 races.The 1¼-mile $5 million Breeder’s Cup Classic attracted a field of 15 horses (Only 14 can start). The odds are led by unbeaten 2-year-old champion Shared Belief and Kentucky Derby and Preakness winner California Chrome, but there are also other 3-year-olds that stand a good chance to win the race, including Belmont Stakes and Jockey Club Gold Cup winner Tonalist, Pennsylvania Derby winner Bayern, Travers winner V.E. Day, Candy Boy and UAE Derby winner Toast of New York. But from all the horses and jockeys taking part in this year’s race, there are three that lead the horseracing odds and that stand as the top contenders. Let’s give ’em a look.

Winner of the 2014 the Peter Pan Stakes in May 2014, Tonalist is best known for winning the 2014 Belmont Stakes. On his only appearance as a two-year-old, Tonalist started a 16-1 outsider for a maiden race at Aqueduct Race Track on November 16 and finished fourth of the nine runners behind Matterhorn. On June 7, in front of a crowd of 120,000, Tonalist contested the 146th running of the Belmont Stakes which attracted much attention as California Chrome, the winner of the Kentucky Derby and Preakness Stakes. Tonalist was making just his fifth career start and became the first horse to win the Peter Pan/Belmont double since A.P. Indy in 1992 On September 27 Tonalist faced Wicked Strong, V.E. Day and the leading older horse Moreno in the Jockey Club Gold Cup over ten furlongs at Belmont, resulting as winner.

Enjoying an evening walk under the supervision of my trainer. Day before the #BreedersCup Classic pic.twitter.com/8GunEOufBg

California ChromeThe chestnut colored and winner of the 2014 Kentucky Derby and the Preakness Stakes is a grandson of Pulpit, with two lines in his pedigree to the California-bred 1955 Kentucky Derby winner Swaps. Although California Chrome has not won since the Preakness on May 17. His Triple Crown bid was spoiled by a hoof injury June 7 while finishing fourth in the Belmont Stakes.

Unbeaten in three races and was named American Champion Two-Year-Old Colt for 2013 at the Eclipse Awards. The brown gelding made its debut at Golden Gate Fields on October 19, 2013, winning by seven lengths in a time of 1:09.53. He was then moved up in class to contest the Grade III Hollywood Prevue Stakes, pulling clear in the straight to win by seven and three-quarter lengths. Shared Belief came back this year to win an allowance race against older horses at Golden Gate Fields on May 26 and won the September 27 Awesome Again Stakes.