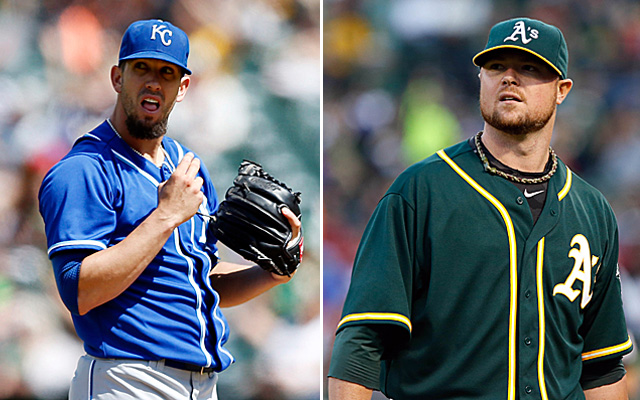 The postseason is hitting the AL, and the MLB playoff betting action gets underway tonight with the AL Wild Card game that see’s the Oakland A’s take their show on the road to face the Kansas City Royals at Ewing M. Kauffman Stadium, Kansas City, Missouri.

The A’s are in the postseason for the third straight year while the Royals qualified for the playoffs for the first time since 1985. James Shields gets the start for Kansas City against Oakland’s Jon Lester.

The Royals have dominated the A’s numbers all season, going 5-2 SU, and more importantly, 3-1 at home. If that form holds true, it should be the Royals that advance to meet the LA Angels, but if there’s something we learned from the last day of the MLB regular season is that nothing is sure until the 9th inning is over.

We will talk about what happens in the AL Wild card match-up at a later date, but for now we should focus on the Division Series pairing what has been decided. That one sees the Detroit Tigers and Baltimore Orioles go head to head. Game 1 goes off at 3.00 PM EST on Thursday October 2nd get the start for Detroit, while Tillman will take the mound for the Orioles.

The Tigers have been installed as slight 1.5-run favorites in the series, and are actually second favorite behind the Angels to take the AL pennant. Many people are looking at this series as being too close to call, despite the fact that the Tigers look like the better team on paper. They have a ridiculously good pitching rotation, but there are some definite concerns when it comes to power. It seems to be feast or famine with this team in terms of run production.

The Orioles would appear to have a little more pop in their bats, but much of that can be attributed to playing in the cozy confines of Camden Yard. Their biggest issue coming into the ALDS has to be about who will not be available to them. The O’s will be missing Matt Wieters and Manny Machado through injury, as well as Chris Davis who is serving a 25 game drug suspension after testing positive for amphetamines.

If the Orioles are to cause the minor upset in the series, they are going to have to find a way to get to the Tigers pitching staff, which just happens to contain three previous AL Cy Young winners.

That’s no mean feat, though, and is another reason why so MLB betting fans are picking Detroit to win the AL outright. The games in this series are very likely all going to be tight, which means pitching is what’s likely to win it. If that is indeed the case, you can probably expect the Tigers to win the series in four games. Baseball betting odds, including game totals and run lines are already listed at mybookie.ag.