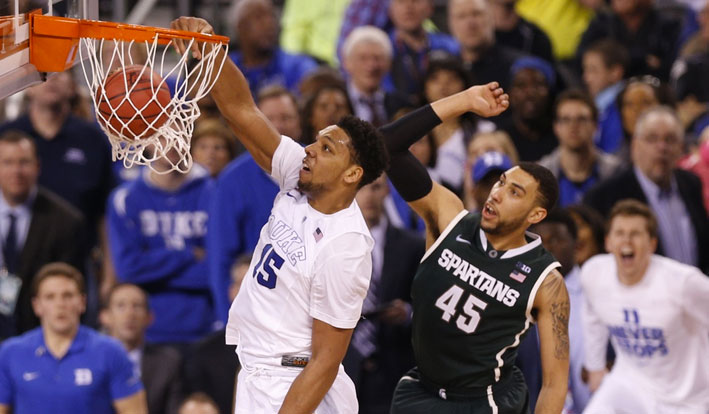 NBA News and Rumors
If you’re an NBA round ball betting aficionado and you’re both, excited about this year’s promising rookie class – and the chance to cash in on the value-packed NBA odds for the 2016 Rookie of the Year – then you’ve come to the right place! Thanks to this expert ROY betting breakdown, you’re going to get the inside scoop on just what to expect from many of the top first-year candidates, followed by my expert pick on just which rookie will bring home the bacon and win the 2016 Rookie of the Year award. With that said, let’s rock and roll.

One thing’s for sure with Okafor…he’ll get plenty of playing time with awful Philadelphia and he’ll get his share of touches and shot opportunities- especially with 2014 first round pick Joel Embiid now expected to miss his second straight season with a lingering foot issue.

Like Okafor, Towns will start right away for a young Minnesota ballclub that has plenty of similarly gifted youngsters in players like reigning ROY Andrew Wiggins and high-flying combo guard Zach Levine.

Russell will also start right away for a Los Angeles Lakers team in desperate need of some youth and energy. I suspect playing alongside Kobe Bryant will help expedite Russell’s learning and growth process while helping him pile up some assists too.

Mudiay may not start right off the bat as he likely will back up starter Ty Lawson, but it’s only a matter of time before Mudiay takes over as the starter – and it could come sooner rather than later depending on how his growth process goes.

I’m going on record to say that I believe Mario Hezonja could potentially turn out to be the best player in this entire draft. That’s the kind of skill set the sweet-shooting swingman possesses.

The multi-faceted Winslow and his do-it-all skills should mesh nicely with backcourt starters Goran Dragic and D-Wade right away.

Maybe it’s me, but I’m still stunned that Knicks fans had such a beef with Phil Jackson’s draft of the versatile big man with the fourth overall pick in the draft. Porzingis has an absolutely unlimited upside in my estimation.

Frank ‘The Tank’ will play right away for Charlotte this season and I believe the mature big man with the well-rounded game could upset the entire ROY apple cart.

Analysis: Could Joel Embiid turn out to be the new Sam Bowie? Reports out of Philadelphia indicate that Embiid needs a second foot surgery and that he will miss his second straight season because of it. Jeez, talk about a franchise in need of a break.

Willie Cauley-Stein 15/1Myles Turner 20/1Jerian Grant 25/1Sam Dekker 25/1Stanley Johnson 25/1Analysis: Cauley-Stein will play a bunch up front alongside DeMarcus Cousins in Sacramento and could surprise, though I don’t think he’s going to score enough to really contend for this award.I really like the underrated and versatile Myles Turner and I believe he’s really going to see his fair share of minutes in Indiana with both, David West and Roy Hibbert gone. Another player I expect to really surprise and contend for this award in silky smooth – and very mature – guard Jerian Grant. I have no doubt that the former Notre Dame star is ready to play at the NBA level right now.I love small forwards Sam Dekker and Stanley Johnson and believe that both could have an impact on the Rockets and Pistons respectively this coming season, though I will admit that Johnson will have a chance to play more minutes in Detroit than Dekker will in Houston.

Cameron Payne 30/1Trey Lyles 30/1Devin Booker 35/1Chris McCullough 50/1Delon Wright 50/1Justin Anderson 50/1Kelly Oubre Jr 50/1Kevon Looney 50/1Larry Nance Jr 50/1R J Hunter 50/1Rashad Vaughn 50/1Rondae Hollis-Jefferson 50/1Terry Rozier 50/1Tyus Jones 50/1Analysis: My Top Three Picks: Call me crazy, but I’m going with a pick for Frank ‘The Tank’ Kaminsky to bring home the bacon and win the 2016 NBA Rookie of the Year award.Kaminsky has already shined in the NBA summer league and I believe he will continue to do so once the ‘real’ seasons gets underway in late October. Kaminsky can put it on the floor, play with his back to the basket and apparently, shoot it from distance better than anyone ever thought. In essence, I believe the Hornets may have come away with the steal of the draft, at least when it comes to big-name players.My second pick goes to Jahlil Okafor. Philadelphia has absolutely no low post scoring presence and Okafor will immediately provide that, though I’m not sure Okafor is going to be too happy losing all the time.Last but not least, I like Orlando’s Mario Hezonja to really contend. Hezonja possesses a multi-faceted skill set that allows him to stroke it from distance or put it on the floor and attack the basket with equal ease. I believe the sweet-shooting rookie is going to shine playing alongside slick-passing point guard Elfrid Payton.Sources:ESPN.go.com: http://espn.go.com/nba/player/_/id/3135048/jahlil-okaforWikipedia.org: https://en.wikipedia.org/wiki/Emmanuel_Mudiay
Older post
Newer post