NBA News and Rumors
Game 1 of the NBA Finals went pretty much the way all NBA betting fans expected, and left many wondering just how quickly the Warriors would be able to dispose of a battered and bruised Cleveland Cavaliers. Two games later, the question that is being asked is if Cleveland, who have a 2-1 series lead, can be David to the warriors Goliath.

Time: Thursday, 9 p.m. ETVenue: Quicken Loans Arena, ClevelandNational TV: ABCOpening line: Warriors -3 (193)The Warriors look like a team is disarray, and are about as far removed from the team that waltzed through the regular season as it gets. Game 3 was a perfect example of the struggles that Golden State have faced in the Finals. The Splash Brothers were pretty much held in check in the first half, which resulted in the Warriors only having 39 points on the board at the half. This is particularly astonishing when you consider that the offense was averaging 100 points per game during the regular season. The Warriors were down by as many as 20 points in the second half of Game 3, but Stephen Curry was able to finally have some success from 3-point range to keep things a little interesting. They fell, short, though, and a 96-91 loss means that they now have to find a way to get that win on the road in game 4 in order to steer clear from the brink of elimination. 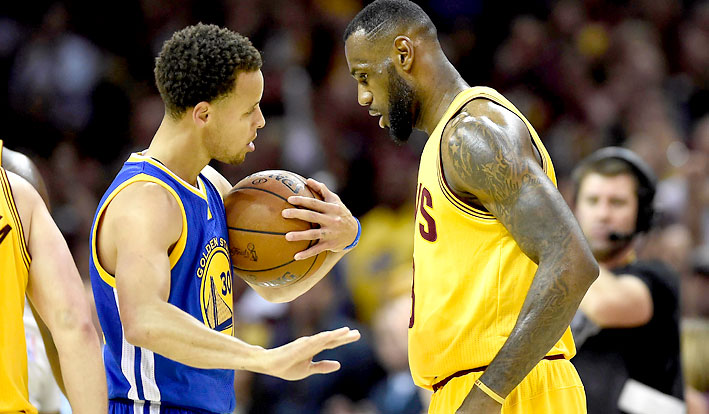 The approach that the Cavaliers are taking in the absence of shooters like Kevin Love and Kyrie Irving is pretty obvious. They are playing physical and allowing LeBron James to use that aspect of his game to boss the offense. To say that this tactic is working is putting things mildly. Harrison Barnes seems to be unable to do anything to stop James every time he strides into the paint. These wining efforts are not all about what LeBron is doing, though, as the lack of offense from Curry and Thompson is all about the gritty play of Matthew Dellavedova. Add the rebounding efforts from J.R. Smith, and you are left looking at a Cleveland team that simply seems to want it more. It can be argued that they style of play that they employed with Love and Irving in the line-up played more into the hands of the Warriors, but you can bet that they would still like to have those guys on the court coming down this final stretch.

Game 4 has become something of a must win for the Warriors, and they really need to start playing with a little desperation. I think they can find that, and will head back to Oakland with this series tied at 2-2.SourcesYahoo.com (http://sports.yahoo.com/news/origin-of-stephen-curry-s-and-klay-thompson-s–splash-brothers–nickname-072158083.html)ESPN.com (http://espn.go.com/nba/player/_/id/3449/kevin-love)
Older post
Newer post