NBA News and Rumors
It’s almost time for the talking and the speculation to take a back seat to the action, as we draw ever closer to the tip-off of NBA betting for Game 1 of the Finals between the Golden State Warriors and the Cleveland Cavaliers. Golden State comes in as a favorite to win it all, and they will have a chance to get the series off to a fast start by hosting the first two games in Oakland, with Game 1 set to go on Thursday night.

“It’s my 6th Finals. 5th in a row. I’m gonna command a lot out of myself.” – @KingJames on his #NBAFinals mindset. pic.twitter.com/wpOD6XnqIX

Much was made of the return of LeBron James to Cleveland in the offseason, but for a while, it really didn’t look as though the move was going to bear fruit right away. The Cavaliers struggled through the first half of the season, but by the time the All-Star Game was a done deal, they had turned things around and had started to roll. The Cavs were nothing short of spectacular in the second half, and they carried that roll into the postseason. There have been a few issues along the way, most notably the loss of Kevin Love for the season in the opening round, as well as the performance of an obviously unhealthy Kyrie irving. LeBron James has taken this team on his large shoulders, though, and it certainly helps that bench guys like J.R. Smith and Tristan Thompson have made massive contributions. Cleveland has reached the Finals by playing great defense, and are giving up around 92 points per game through the playoffs.The Cavaliers are going to have to be at their defensive best when they run into the Warriors. Stephen Curry and Klay Thompson, who has been given the all-clear after an injury scare, can throw it down with the best of them, and will need to be shut down if Cleveland does not want to go the whole series playing catch up. League MVP Stephen Curry leads the Warriors in the playoffs with 29.2 PPG, and has been particularly deadly from 3-point range. It’s not all just about the Splash Brothers, though, as they have a supporting cast that has made this run to the Finals very much a team effort. 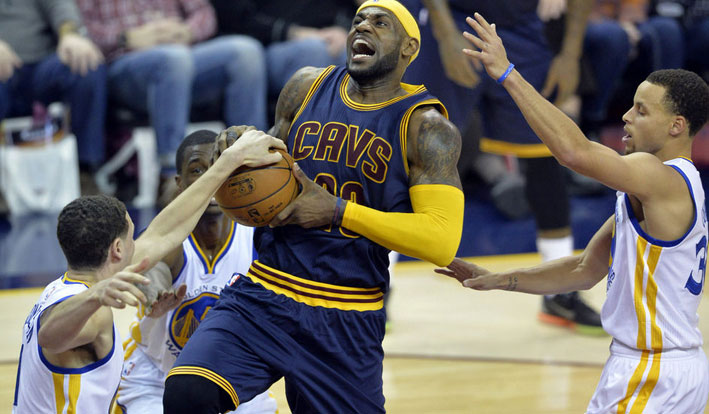 These two teams met twice in the regular season and went 1-1. While the Cavs won 14 of 15 games against Western Conference foes coming down the stretch, the playoffs is a whole different ball of wax. James has done a masterful job of leading his team to the Promised Land, but he is about to run into the team that has been the best in the NBA all year. I expect the Warriors to come out flying, and to walk away with the win in Game 1.Sources:ESPN.com: http://espn.go.com/nba/player/_/id/1966/lebron-jamesBasketball-reference: http://www.basketball-reference.com/players/t/thompkl01.html
Older post
Newer post