NBA News and Rumors
There were some genuine concerns coming into the NBA Finals that we were in for a total mismatch, as it’s a given that the Western Conference is vastly superior to the East. As good as Cleveland looked getting to the Finals, they did not really have to play any teams that were close to the caliber of the Warriors. Game 1 turned out to be a genuine surprise, though, as both teams went back and forth to take the game to OT, with the Warriors eventually running out 108-100 winners. NBA betting on Game 2 is set to go on once again in Oakland on Sunday night.

Time: Sunday, 8 p.m. ETVenue: Oracle Arena, OaklandNational TV: ABCOpening line: Warriors -6.5 (201.5)If the Cavaliers are to win this thing, they are going to need LeBron James to take over. He certainly gave it his best shot in Game 1, scoring 44 points and 6 assist, as well as chipping in 8 rebounds for good measure. To put that in perspective, his totals were almost as good as what the Splash Brothers, Stephen Curry and Klay Thompson, delivered combined. It did look for a while as though the Cavaliers were going to steal one on the road, which they are going to have to do to win this series, but the Warriors eventually started to pull away in the final 5 minutes of OT. It’s going to be interesting to see how the Cavaliers rebound from this loss. Are they going to take heart from the fact that they were incredibly competitive in a building that is very tough to win in, or is the OT loss going to be taken like a dagger to the heart? 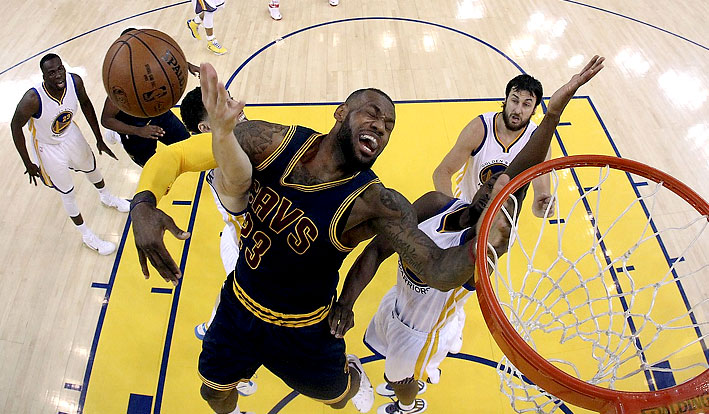 While the numbers that LeBron put up might suggest that he was poorly defended all night, the fact of the matter is that Andre Iguodala was able to contain him pretty well when it came to crunch time. Iguodala was huge coming off the bench, adding 15 points and defending like a champ. Stephen Curry actually had the chance to end things in regulation, as it looked as though he was going in for a routine layup. That attempt was blocked by Kyrie Irving, but you have to wonder at what cost. Irving, who has had a nagging injury for a while now, limped off the court during OT, and you have to wonder what his status will be for Game 2.

This may well have been Cleveland’s best shot at getting a win on the road, and they are now in something of a must win scenario in Game 2. Going down 2-0 to arguably the best team in the NBA is a hole that will be tough to get out of. Unfortunately for the Cavs, I think that is exactly what is going to happen. SourcesMercuryNews.com (http://www.mercurynews.com/warriors/ci_28256891/klay-thompson-shines-warriors-overtime-win-over-cavaliers)BusinessInsider.com (http://www.businessinsider.com/andre-iguodala-comes-up-huge-in-game-1-2015-6)
Older post
Newer post