NBA News and Rumors
Courage-under-pressure, home advantage, confidence, style of play and (most importantly) defensive discipline, will be some of the key elements tested to the very extreme when the Brooklyn Nets host the Atlanta Hawks in a kill-or-be-killed Game 6 clash at the Barclays Center this Friday. With the pressure on Brooklyn to win the game and tie the series at 3-3, will the Nets man up to the occasion, or will the Hawks explode into another shooting spree (like they did in Game 5) to clinch the series? Stay with us as we give a brief, but inclusively circumspect analysis of this pivotal NBA odds showdown in the section below.

Venue: Barclays Center, Brooklyn, New YorkDate: Friday, May 1, 2015Time: 8:00 PM ETTV: ESPN/ WATCH ESPNSeries Standing: Hawks lead the series 3-2If the Hawks need people to thank for their monumentally important victory in Game 5, then they simply have to direct those sentiments to their starters, who interchangeably played key roles to hold off the never-giving-up Nets. After seeing their 2-0 lead in the series evaporate and turn to 2-2, following a pair of back-to-back wins by Brooklyn, it almost looked like the Nets (who were in a great momentum) would claim a third successive victory on Wednesday Night during Game 5.But thanks to a big first half performance by DeMarre Carroll, an uplifting game from Jeff Teague (who limped off the game with a leg injury, but returned to help his team close out the game), an all-rounded showing from All-Star center Al Horford and crucial contributions from Kyle Korver and Paul Millsap, the Hawks were able to withstand a late surge from Brooklyn. Late in the game, the Nets cut a 10-point lead in the fourth quarter all the way down to one, but failed to complete the comeback as Atlanta held on to its lead to win the game 107-97. 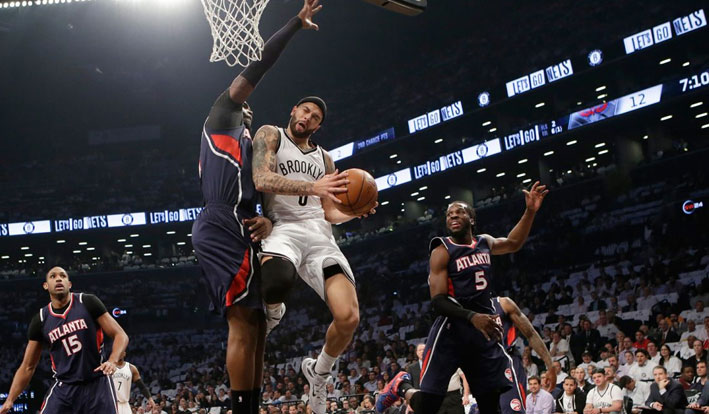 In the end, Carroll had a team-best 24 points (19 of those coming in the first half), Teague finished with 20 points (9 coming in the last quarter), and Horford had a crucial double-double of 20 points and 15 rebounds plus 5 assists. After such a solid home performance, the Hawks simply need to play in the same way they did in Game 5 (of course minus the many turnovers they gave in the second half). By doing so, they’ll have a great chance of closing out this series.On the flipside, the Nets were led by quality minutes from their bench, which outscored the Hawks’ reserves to the dominant tune of 41-16. This bench received big numbers from Alan Anderson (23 points) and Jarrett Jack (18 points), with the duo combining for an impressive 6-of-7 shooting from downtown. Meanwhile, former All-Star Joe Johnson bounced back from his mild performance in the series by shooting 7-of-15 from the field to finish with 18 points and 9 rebounds.But as a let-down for the Nets, All-Star guard Deron Williams had a pathetic game, posting a shameful 5 points, 6 boards and 6 assists after he had exploded for a postseason career-high of 35 points and 7 assists in Game 4. All-Star center Brook Lopez joined him in his struggles, making many bad shots in the game to finish with just 15 points and only 3 boards on 31 percent shooting from the field. For someone who entered the contest averaging 21.3 PPG, 11 RPG and 2.3 blocks on 54 percent shooting, Lopez certainly had a poor outing. 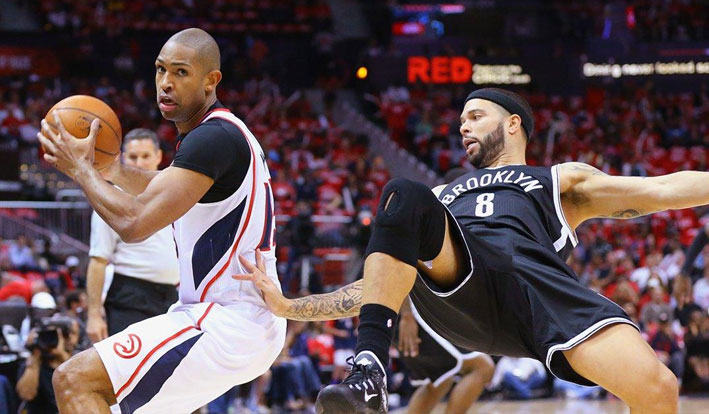 Looking ahead to Friday’s game, the solution is very simple–Williams and Lopez have to perform better with the many minutes they are given, particularly in shooting better and trusting others with the ball, rather than forcing shots, as was perennially done by Lopez on Wednesday. Meanwhile, the bench and starters like Johnson (who played well in Game 5) will also have to continue upping the ante. It is only by doing so, that the Nets will have a chance of capitalizing on their home advantage.

Going by the fact that the home team has not lost a game in this series, I would not be surprised if the Nets recorded a victory this Friday to force a winner-takes-all Game 7. Still, I’ll go out on a limb and side with the Hawks to close out the series with a nervy win plus cover. And I take Atlanta because Korver and Horford have found their confidence, while Williams and Lopez don’t look like they’ll be able to go the distance even with their home crowd behind them. Total-wise, expect another explosive encounter that delivers an OVER, as has been the case in Game 4 and 5 of the series.SourcesESPN.com (http://espn.go.com/nba/recap?gameId=400790925)NYpost.com (http://nypost.com/2015/04/30/the-reason-behind-deron-williams-encore-flop/)
Older post
Newer post