NBA News and Rumors
The Memphis Grizzlies got the split that they really needed on the road versus the Golden State Warriors, and now head home with their sights set on taking control of the series in Game 3. That game is set to go on Saturday night, and will be a crucial game in deciding who gets the momentum in what looks like being a very competitive series. Who’s the NBA odds favorite this time around? Check our betting preview to find out!

The Grizzlies parodied ‘The Warriors’ to hype Game 3 of their playoff series http://t.co/spn4CG2olr pic.twitter.com/K1qv28jhTr

There was a bit of a party atmosphere in Oakland for Game 2, as the Warriors had handily won the first game and then got to see Stephen Curry get his MVP Award before the tip-off of the second game. The Grizzlies very quickly took control, though, quieting the home crowd and only allowing the Warriors to have a lead for a total of 66 seconds throughout the game. Golden State played the majority of the game trying to dig out of double-digit deficits caused by their inability to sink baskets, as well as a slew of turnovers, both of which were very uncharacteristic for this team. All told, the Warriors had 20 turnovers, and the Grizzlies made the most of those mistakes by converting them to 22 points. 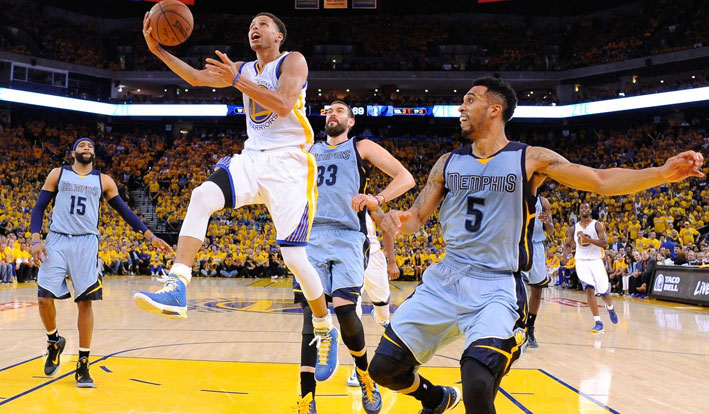 Basketball games tend to be about momentum, and the Grizzlies did a great job of preventing Golden State from getting any in Game 2. Memphis prevented the Warriors from scoring two consecutive baskets the entire game, which allowed them to maintain their lead, whilst also making the home crowd a total non-factor. It was a stifling defensive performance from Memphis, and is one that they are going to have to repeat if they hope to have continued success against the best offense in the league. That is not going to be easy to do, though, as Stephen Curry and Klay Thompson both had off nights in Game 2, and the chances of that happening again are slim. It is also unlikely that the Warriors will repeat the turnovers that plagued them in the second game of the series.

Golden State will not be happy that they gave away home court advantage, especially after looking so very dominant in Game 1. You get the sense that they all got a little too caught up in the pre-game hoopla, while the Grizzlies remained focused on the job at hand heading into Game 2. The Warriors will be looking for at least a split in Memphis, and I believe that is something that they will accomplish by taking Game 3 in pretty comfortable fashion. SourcesForbes.com (http://www.forbes.com/sites/jerrybarca/2015/05/08/nba-mvp-stephen-curry-seizes-the-moment-and-delivers-his-message/)ESPN.com (http://espn.go.com/nba/player/_/id/6475/klay-thompson)
Older post
Newer post