NBA News and Rumors
Just the past few months have given the NBA’s union leader Michele Roberts a reason to look closely at the concussion protocols in place in the league. Stephen Curry ambled woozily toward the locker room after slamming his head against the floor – and he came back in that same game. Klay Thompson got kneed in the head and got cleared to come back into the game, affecting the NBA odds, only to have a later diagnosis of a concussion.After these incidents, Roberts has hired a team of neurologists to take a look at league protocol for concussions and decide whether or not changes are necessary to keep players off the court if they could have an undiagnosed concussion. This is a topic that has already stirred up controversy in the NHL and the NFL, and while the director of the NBA’s concussion program said that the team handled both the Curry and Thompson incidents correctly – despite the concussion diagnosis for Klay Thompson – Roberts believes that a longer period of caution might be a good idea for players who get hit in the head. Roberts has a legal background, not a medical one, but she also believes that any player who suffers a concussion and then returns to that game is one too many. The question becomes whether the health of players or the competitive outcome of a game is more important. Under the current policy, any time a player is suspected of having undergone a concussion, athletic trainers or team doctors run tests on the player’s short-term recall and memory with a series of cognitive tests. They also look at the player’s coordination and balance, as well as variances from a player’s normal mannerisms. However, it’s harder to detect some brain injuries than it is to identify injury to an ankle or knee. Indeed, about 1 in 4 concussions does not show any symptoms until as long as a day after the injury occurs.Stephen Curry‘s injury took place during Game 4 of the Western Conference finals, and he passed the battery of tests twice, which is why he returned to play. Thompson didn’t return to Game 5 of that series because his ear wouldn’t stop bleeding without stitches – not because of the concussion he had suffered. Because of the potential for a delayed reaction, some experts are asking why players are getting back onto the court before doctors have certainty that a concussion has not taken place. In the case of the blows to the heads of Curry and Thompson, the fact that they did not get right up after the impact should be a possible sign of concussion. 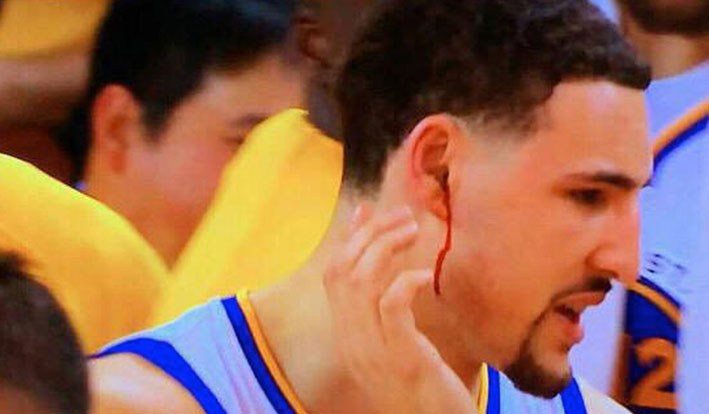 The current protocol has been in place for four seasons, and the league has seen an average of 13 concussions in each season since then. That’s a lot less than in the NFL, were 111 concussions took place just during the 2014 regular season.The choice to allow a player with a concussion to return is not in the player’s hands. Instead, the doctor makes a final decision about when a player should come back into a game. The steps include going through several levels of increasing activity, moving from riding a stationary bike to jogging, agility work and non-contact drills. Any symptoms prevent the player to moving to the next level. Because of the risks of increased neurological damage as a result of a second blow to the head before recover from a concussion, though, it is worth considering stricter protocols to keep players from returning to action when they are vulnerable. A lifetime of damage is not worth a win, even in the NBA playoffs.Sources:ESPN.com: http://espn.go.com/nba/player/_/id/6475/klay-thompsonNBA.com: http://www.nba.com/playerfile/stephen_curry/
Older post
Newer post