NBA News and Rumors
With the NBA season winding down, it is becoming increasingly clear that the title may well go to a team that has never won a title — or at least has not won a title in years. Now that the Cleveland Cavaliers are the favorite team to come out of the East and the Golden State Warriors possess the best record in the entire league and are the predominant favorite to come out of the West, it is fairly clear that this year’s marquee matchup is going to feature LeBron and Company against the emergent Stephen Curry. 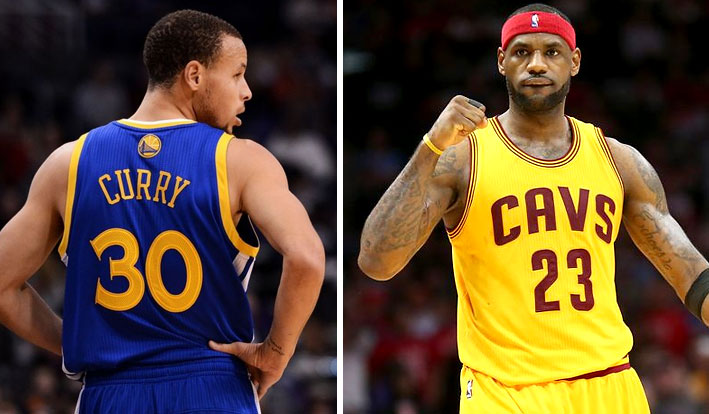 Curry may be headed to the MVP, not just because of his transcendent performance in the three-point shooting contest but because of his sheer ability to take over basketball games, with an average of 23.6 points, 8.1 assists and 4.7 boards per game, all while shooting 49 percent from the floor. However, he’s not the Warriors’ only weapon. Klay Thompson is undergoing one of the most surprising improvements in the league, averaging 22.4 points per tilt — an increase of more than six points in comparison to his career average at the start of the season. The Warriors’ last title? 1975, although this year they are listed as second favorites on NBA lines to win the championship at +350.The Cavaliers started the season as the favorites to win the NBA title (and still are at +300 odds,) largely because LeBron decided to take his talents away from South Beach. However, the East has become a particularly dangerous place. There aren’t nearly as many contenders lurking in the East as there are in the other conference, but the Atlanta Hawks definitely will have something to say about whether the Cavs keep that favorite status. Cleveland had fallen under .500 but had an eleven-game winning streak that restored hopes. A lot of people, though, didn’t even thing the Hawks would qualify for the playoffs before the season began, but now they look poised to make deep playoff run. The Hawks’ last title? 1958. Of course, they didn’t play in Atlanta then. They played in St. Louis, a city that hasn’t had pro basketball since the ABA’s Spirits of St. Louis took what would become one of the most lucrative buyout deals in the history of commerce — but that’s another story.

Other Teams To Look Out For 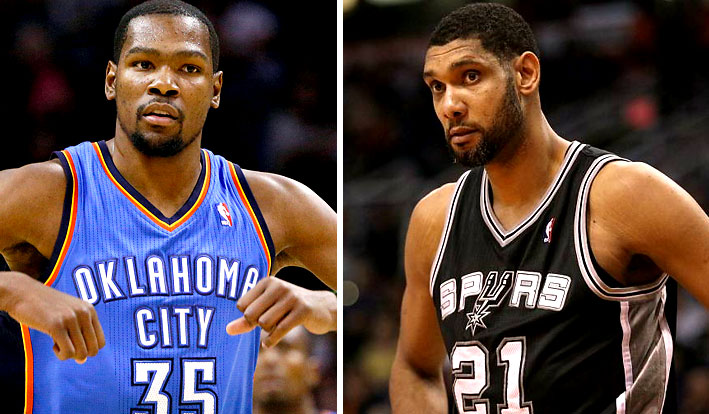 What about some other teams that are maneuvering their way into title talk? The Oklahoma City Thunder currently have the ninth-best odds for winning the title, even though they are having a hard time staying in the top eight teams in the West, a requirement for even going to the postseason. Significant time without Russell Westbrook and Kevin Durant on the floor has contributed a lot of losses to the tally. Sending Kendrick Perkins away and bringing in Reggie Jackson might solve some ills, but concerns about those screws holding Durant’s foot together are not going to go away. While the Thunder have been to the NBA Finals, they have not won a title since their relocation to the Sooner State. When the franchise was better known as the Seattle SuperSonics, they did win a title, but that was way back in 1979. They are currently tied with the Atlanta Hawks for third-place favorites to win the NBA championship at +500.Even though the Warriors look unstoppable in a best-of-seven series, there are some other teams worth talking about coming out of the West. In San Antonio, Gregg Popovich has spent so much time resting the elder statesmen Tony Parker, Tim Duncan and Manu Ginobili that they should be well rested for the postseason. Once they get there, they tend to kick things up to another level. Last spring, the Dallas Mavericks tested their resolve, pushing them to seven games in the first round, but after that, the Spurs found that playoff gear and didn’t stop that juggernaut until they’d made LeBron look as tentative in the NBA Finals as he did in that infamous Cavalier playoff loss to Boston, when he just stood there, looking shocked that another team might have figured out how to outplay him.The Spurs currently sit at a comfortable +750 odds to win the championship. 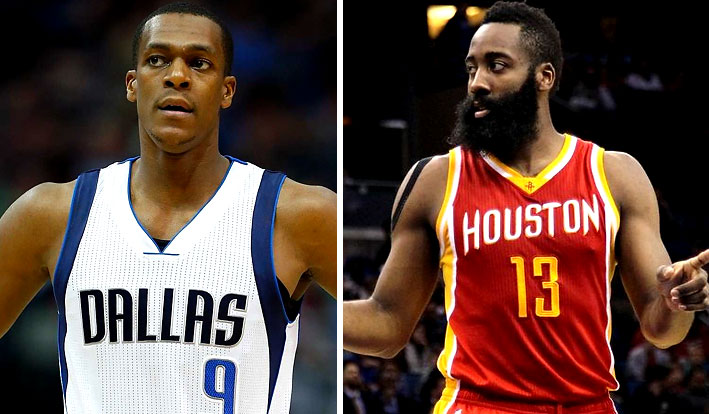 Speaking of the Mavericks, where are they headed? They pulled off a blockbuster trade with the Celtics to bring enigmatic point guard Rajon Rondo to town, in order to bolster a dreadful defense. Then they brought in Amar’e Stoudamire, who took a buyout from the woeful Knicks, to provide a much-needed center to fill the gap when Tyson Chandler needs a breather. If coach Rick Carlisle and Rondo can keep from tearing each other apart, the Mavs should enter the postseason as one of the more intriguing squads. The Mavericks are listed at +1600.You could say the same thing about the Memphis Grizzlies, Houston Rockets, Portland Trail Blazers and the Los Angeles Clippers, though. Each of these teams has elements of greatness combined with flaws that at times simply make them look ridiculous. The ones that can put those flaws behind them during their playoff run could knock Golden State out of consideration.

This Year’s Surprise Could Come From The West 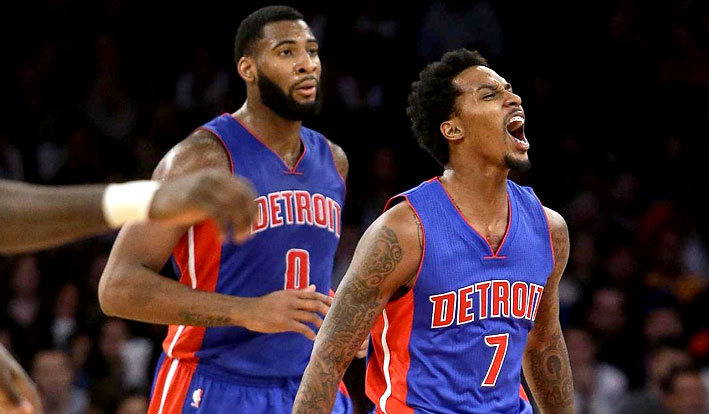 The Detroit Pistons are also making their way into title talk. If they were in the West, they wouldn’t have a chance, but the awful competition surrounding them in their conference means that you don’t necessarily have to win even half of your games to make it into the playoffs. This team was always in the championship conversation during the “Bad Boys” era of the 1990s, when such miscreants as Bill Laimbeer, John Salley, Isiah Thomas and Vinny “Microwave Johnson” — not to mention North Korea’s best friend Dennis Rodman. Now, though, they could throw a scare into a top seed in the first round, if not go further. The Pistons could become a profitable dark horse, they are currently listed as +15000 underdogs to take the title. 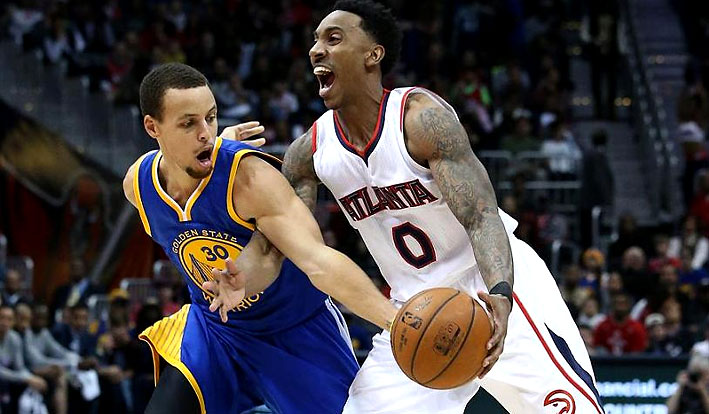 If I had to pick an NBA Finals pairing, I would bet on a matchup between the Hawks and the Warriors. While LeBron did put titles together in Miami, the cast around him in Cleveland needs another year of jelling together before they have what it takes to emerge from the house of horrors that the postseason represents for teams that don’t have it all quite together. Much has been made of LeBron’s newfound maturity, but the Cavs still have too many question marks to answer before I anoint them the team most likely to make it through three playoff series in the East and represent the conference in the Finals. The Warriors have made statement after statement this season and seem ready to take that next step. So I’d pick the Warriors in six in this series. But I wouldn’t be surprised to see Duncan or Dirk or Chris Paul hoisting that championship trophy either.
Older post
Newer post