NBA News and Rumors
There’s just so much the NBA can accommodate with the maximum of 60 players selected in the NBA draft. Following the drama-filled 2015 draft, there are a number of decent basketball players who weren’t lucky enough to find a home this NBA betting season, joining the yearly list of undrafted prospects that must fight their way into a roster by playing well in training camp and the summer league.Here is a look at some of the top names that failed to earn a call-up during the 2015 NBA Draft:

After spending most of their times together in Kentucky and often sharing the spotlight of success, the Harrison twins were finally separated by the NBA draft, as Andrew Harrison was selected No. 44 overall by the Suns (and later traded to Memphis), while his twin brother Aaron Harrison went undrafted. Despite leading the Wildcats in scoring last season, the 2014 SEC Preseason Player of the Year had unrefined ball-handling skills and inefficient game as a passer, which saw him get overlooked in the draft.

After averaging a double-double (in scoring and rebounding) as a sophomore at UNLV, Wood look destined to become a first-round pick over his teammate Rashad Vaughn (who was drafted by Milwaukee). In spite of his talent, the youngster was considered to be underweight, probably the reason he was ignored. If he can put up some weight, Wood should soon find a team, as he is a decent shooter, while his rebounding and shot blocking skills are equally good.

Cliff Alexander is just dunking on everybody. pic.twitter.com/voHJpsxjn4

Going undrafted was certainly a big surprise in Alexander’s case. An underclassman, Alexander was touted as rare talent and was due for a big year in Kansas, but he was declared ineligible over an extra benefit issue, which would have limited him from game time in college, so he decided to prematurely end his college career and declare early for the NBA draft. With an athletic body, checking in at 6’9 and 239 pounds with a 7’3 wingspan, and decent averages of 7.6 points scoring, 5.3 boards and blocking 1.3 shots when on the floor, many thought the big man would somehow find a team in the NBA. Unfortunately, it seems like off-court issues scared teams away, so he’ll have to work his way to the NBA through the free agency.

After a successful career that saw him finish as the 24th All-time leading scorer in Texas (with 1,166 points) and ninth in the school’s all-time rebounding list (with 749 rebounds), you’d expect that teams would be impressed by him. But at but at 6-9 and 240 pounds, it seems like some NBA teams looked at the senior as lacking the athleticism and drive needed to compete at a high level, as he averaged just 10.3 points, 6.1 rebounds, a block and assist in his 26.1 minutes in his final year.

In his two seasons with the Gators, Frazier boasted of great shooting skills, hitting 45.3 percent from 3-point range. However, in his last season, he became a bit too three-point happy, with his numbers dipping to 38.0 percent from downtown as a junior. Of course, the high-ankle sprain late in the season was one of the reasons his numbers were limited, as he finished the season with 12.1 points and 4.1 rebounds per game. And from the look of things, it is his dipping numbers that probably cost him a spot in the draft. Even so, Michael Frazier is still good shooter from beyond the arc, something that many teams could use. If he can build other aspects of his game like rebounding and shooting, he should be getting a team sooner rather than later. 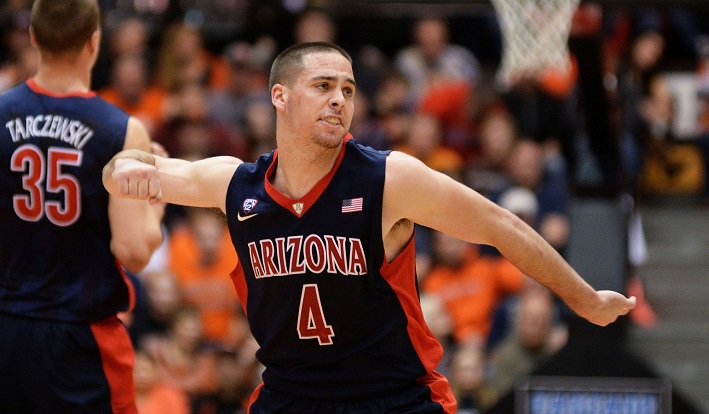 T.J. McConnell, Point Guard, Arizona: The 6’2, 188-pound point guard averaged 10.4 points, 6.3 assists, 3.8 rebounds, and 2.2 steals in his 30.5 minutes for the Wildcats. His lack of size, average numbers and not-so-great athleticism are said to be the probable reasons he went undrafted.Robert Upshaw, Power Forward/Center, Washington: A seven-footer, weighing in at 258 pounds with 7’5 wingspan. Played as a center for the Huskies last season, averaging 10.9 points, 8.2 rebounds and 4.5 blocks in just 24.5 minutes per game, but had injury concerns and off-court issues.Alan Williams, Power Forward/Center, UC Santa Barbara: The senior, who was named as Big West Conference Player of the Year in 2014, averaged 17.6 points, 12.1 rebounds, 1.8 blocks, 1.6 assists, and 1.1 steals in his 33.3 minutes at Santa Barbara. He however played for a “small college” and is undersized at 6’8 for a center, weighing 261 pounds, which may have hurt his draft stock.Sources:ESPN.go.com (http://espn.go.com/mens-college-basketball/player/_/id/66614/aaron-harrison)Wikipedia.org (https://en.wikipedia.org/wiki/Michael_Frazier_II)
Older post
Newer post