NBA News and Rumors
The Eastern Conference semi-final between the Atlanta Hawks and Washington Wizards is now routinely delivering highlight reel finishes, with the Hawks delivering the latest in Game 5. It looked as though Paul Pierce was going to be the man to win it again with a stunning basket to give the Wizards a 1-point lead with 8 seconds left on the clock. The Hawks answered, and it was Al Horford who hit the game winning layup just 6 seconds later. Game 6 is up and the Wizards are online NBA betting favorites by 3 points.

The Hawks are now just one win away from their first ever Eastern Conference Final, but they have to count themselves a little lucky. The Hawks did a lot of things wrong on the road to victory, turning the ball over a lot, and missing a ton of open shots from 3-point range. It was Al Horford who provided the much needed inspiration, bailing his team out on more than on occasion. Atlanta was down by double-digits in the second half, and it certainly looked as though they were heading to a crushing defeat on home court. Horford would not be denied, though, ending the game with 23 points, 11 rebounds, and 5 blocked shots. Atlanta is going to have to eliminate those errors and get more from their starters if they are to advance in 6 games. 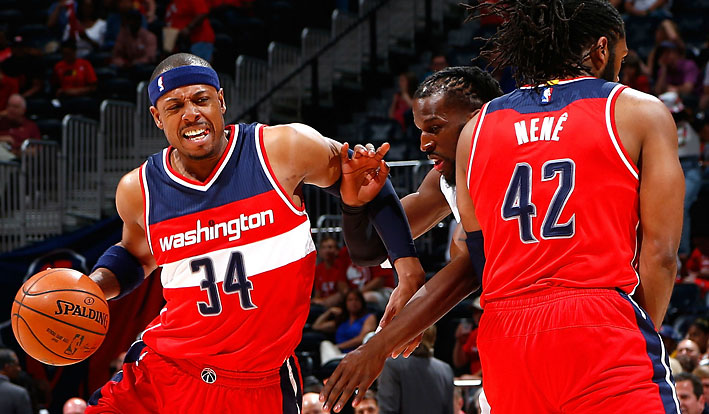 The Washington Wizards must be wondering what they have to do to put the Hawks away, as Game 5 was yet another solid effort that went unrewarded. Despite the loss, the Wizards have to be buoyed by the return of John Wall, as they are going to need what he brings to the table if they hope to keep their playoff hopes alive. Wall delivered 37 minutes in his return form a wrist injury, and out up some solid numbers: 15 points, 7 assists, and 4 steals. Bradly Beal has quietly been the start of the series for Washington, averaging over 24 points per game, whilst shooting a very respectable 39% from 3-point range. The biggest issue for Washington right now is the contributions, or lack thereof, from the bench. They have to be more effective or this series is going to be over in 6.

The Hawks are not really a team built to blow their opponents out of the water. They just stay close and chip away until they eventually get in front. I imagine that Washington are going to come out flying in Game 6 in front of their home fans, but I think that Atlanta will continue to play their game and find a way to win. SourcesUSAtoday.com (http://www.usatoday.com/story/sports/nba/2015/05/13/horfords-late-follow-gives-hawks-82-81-win-over-wizards/27282683/)ESPN.com (http://espn.go.com/nba/player/_/id/4237/john-wall)
Older post
Newer post