NBA News and Rumors
Once the NBA draft came to an end and the free agency period, things have been going fast and furious as teams try to lock down the big pieces for the 2015-2016 season while fitting everything under the salary cap. Here are the latest and greatest rumors to date that every NBA betting fan is curious about.The Miami Heat are in search of some three-point shooters, and they have put out feelers to Marcus Thornton and Marco Bellinelli. Lou Williams is another player who may be considering a move to South Beach.The Dallas Mavericks have apparently signed a four-year deal with Wesley Matthews from the Portland Trail Blazers. This could be the big piece that lures DeAndre Jordan to Dallas. Reportedly, only the Mavs and Clippers remain in contention for his services next year.

The Sacramento Kings lost out big on Wesley Matthews, who turned down a huge contract offer in order to go to Dallas. The Kings have also been in pursuit of point guard Rajon Rondo (for some reason – can you imagine having him on your team after he imploded on the Mavericks during the first round of the playoffs???) but if he doesn’t want to go there, they are also considering getting Deron Williams in a trade.Speaking of trades, the Golden State Warriors are considering following up their championship by trading David Lee to New York.The list of LaMarcus Aldridge‘s destinations is still at three, apparently: San Antonio, Phoenix and the Lakers, in that order, although the Miami Heat‘s Pat Riley had dinner with Aldridge on Thursday night. He still has not made a decision, though.It looks like Robin Lopez will become a New York Knick, having chosen that team over the Lakers. The Indiana Pacers have resigned Lavoy Allen to keep their power forward in the fold. Because David West is gone, the Pacers will need some depth in the middle.The Los Angeles Lakers are looking at Jason Smith and Amar’e Stoudemire as possible fillers on their roster. The Brooklyn Nets really want to move Joe Johnson’s $25 million expiring contract as soon as possible. 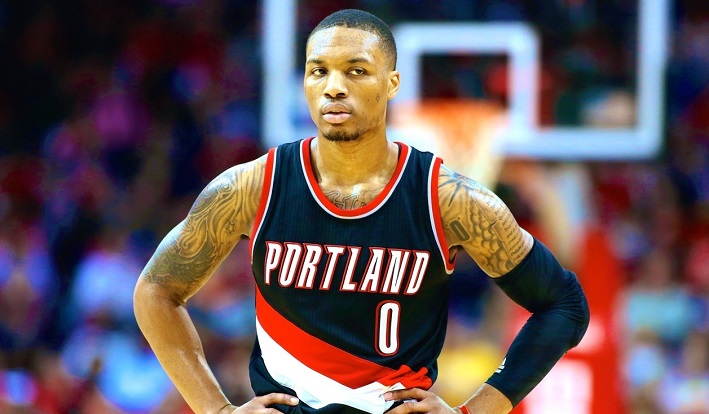 While it looks like Portland is emptying out, they did sign Damian Lillard to a $120 million dollar deal. Even so, they will only have one of their five starters from 2014-2015 under contract. Lillard was the NBA Rookie of the Year in 2013 and has already appeared in two All-Star games. After the 2013-2014 season, he was third team all-NBA. In 2014-2015, he averaged 21.0 points, 6.2 assists, 4.7 boards and 1.2 steals per game. His scoring average ranked 13th in the league among qualifying players, and he was also fourth in total minutes played.For a while it looked like Dwyane Wade was wanting to head to Cleveland and join LeBron, but then he signed a one-year, $20 million deal with the Miami Heat. Wade had opted out of a $16 million paycheck from the Heat and got himself a $4 million raise. The Heat demurred at the chance to offer him a longer extension, which means that this will be Wade’s year to prove himself before entering a free-agent market for 2016-2017 that will feature the biggest salary cap jump in league history.Sources: ESPN.go.com (http://espn.go.com/nba/player/_/id/2983/lamarcus-aldridge)Sports.Yahoo.com (http://sports.yahoo.com/nba/players/3708/)
Older post
Newer post