NBA News and Rumors
Okay MyBookie.ag NBA betting fans, with the 2015 Western Conference Finals set to get underway tonight, it’s time to get the A,B, C’s on what’s going to go down over the course of what looks like one of the most intriguing conference finals matchups in recent memory.Thanks to this fun-filled ‘report card’ on both teams, you’re going to have a great idea of what to expect when Steph Curry and the Golden State Warriors battle James Harden and the Houston Rockets over the course of the 2015 Western Conference Finals.Okay, with that said, let’s rock and roll.

Golden State: Let’s see…not only do the Warriors have the league’s MVP in Steph Curry leading the way (23.8 ppg), but the Dubs also have a pair of excellent veteran backups in Shaun Livingston (5.9 ppg) and Leandro Barbosa (7.1 ppg). Curry leads all remaining players in the postseason in scoring (28.2 ppg) and is just a dozen made three-pointers away from Reggie Miller’s all-time postseason mark set in 2000 (in 23 games).Grade: A+Houston: With starter Patrick Beverly sidelined for the postseason, the Rockets have had to rely on veterans, Jason Terry (7.0 ppg) and Pablo Prigioni (3.0 ppg) to run their offense and the pair has more held their own through two playoff series. Still, as much as this pair has overachieved, I can’t say the point guard matchup looks very promising for Houston heading into the conference finals. Nevertheless, the Jet and Pablo get a ‘B’ for averaging less than two combined turnovers between them.Grade: B 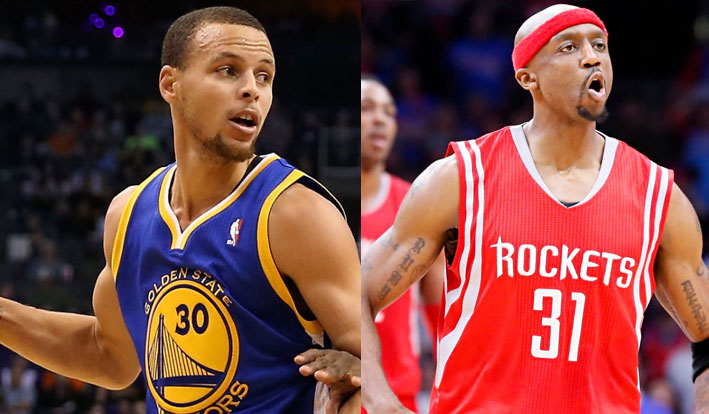 Golden State: Um…the Warriors likely have the second-best shooter in the game today manning their shooting guard position in two-way star Klay Thompson (21.7 ppg). The bad news for Houston is that Golden State’s sweet-shooting all-star scored 20 points or more in three of his final four games against Memphis in the last round while grabbing eight rebounds or more twice over his last four games. Thompson will also make scoring as tough as can be expected against Houston’s James Harden.Grade: AHouston: While Klay Thompson is about as elite as it gets at the two guard spot, the edge still goes to Houston’s James Harden (27.4 ppg). The Rockets franchise superstar scored at least 20 points in all seven games against the Clippers in the last round while topping the 30-point plateau twice and dishing out at least seven assists in three games. If the Rockets want to pull off the upset in this series, they’re undoubtedly going to need Harden to be at his very best.Grade: A+

Golden State: Maybe it’s me, but I think Harrison Barnes (10.1 ppg) has a chance to be one of the best small forwards in the league for the next half-decade at the very least. The multi-faceted swingman scored in double figures in each of his last six games against Memphis in the last round and is shooting a scorching 50.6 percent for the entire postseason while pulling down an impressive 5.2 boards per game.Grade: AHouston: As much as I love Golden State’s Harrison Barnes, I feel the exact same way about Houston’s Trevor Ariza (12.8 ppg). The veteran small forward was crucial in leading Houston to its semifinal series win over the Clippers in the last round, scoring 22 points or more in two of the final three games, including Sunday’s decisive Game 7 win. Ariza pulled down at least seven rebounds in four games in the last round while recording two steals or more in four straight games.Grade: A 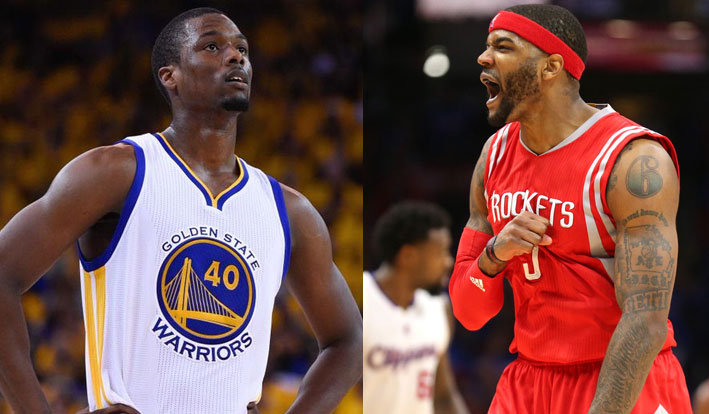 Golden State: If you love NBA basketball, then you’ve got to love a player like Golden State’s Draymond Green. The Warriors’ third-leading scorer (11.7 ppg) may be an undersized stretch four in a time when everyone is looking for a 6-11 leaper like Anthony Davis, but it hasn’t deterred Green from excelling one iota. The versatile Green can shoot it from distance, pulls down 8.2 boards per game while simultaneously providing the toughness and heart the Warriors so desperately need.Grade: B+Houston: Even with starter Donatas Montiejunas out for the postseason, the Rockets have two excellent ‘fours’ they can rely on in veterans, Terrence Jones (11.7 ppg) and Josh Smith (12.0 ppg).Jones is averaging 11.3 points per game this postseason and scored 10 or more points in five games against the Clippers. The enigmatic Josh Smith came alive against the Clippers late in their semifinal series, scoring 15 points or more in each of the final two games, including a season-saving 19 in Thursday’s historic Game 6 comeback.Grade: B

Golden State: I know Andrew Bogut is averaging a modest 5.3 points per game this postseason, but the fact of the matter is that Golden State doesn’t look to their big man for buckets. Still, Bogut is shooting 59.1 percent from the field when he does touch the rock while pulling down 8.3 rebounds and blocking 2.0 shots per game. Points or no points, Bogut has been just what the Warriors have needed to anchor their elite defense.Grade: BHouston: I’m no big fan of Houston’s enigmatic Dwight Howard (15.8 ppg), but the fact of the matter is that there aren’t many men on the planet that are 6-11 and can run and jump like the Rockets’ athletic big man. Howard grabbed 14 rebounds or more in five of seven games in the last round while topping the 20-point plateau four times. No matter what you think about Howard, there’s no denying that he can change the course of any contest he plays in because of his defense, interior scoring and rebounding.Grade: A 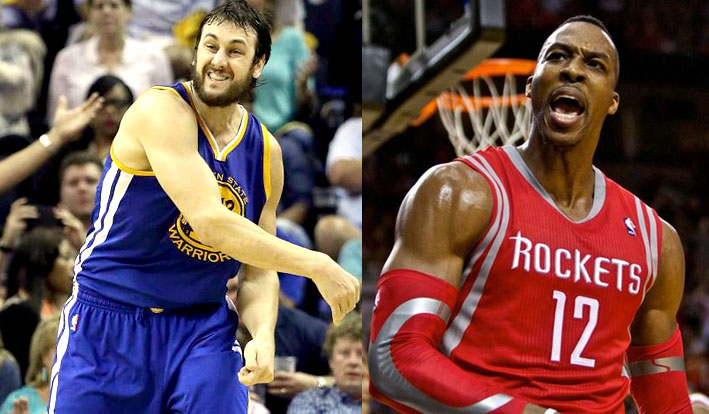 Golden State: The Warriors have a virtual who’s who of competent bench players that not many teams can matchup up with, starting with veteran big man Marreese Speights (10.1 ppg), former all-star forward David Lee (7.9 ppg) and outstanding two-way sixth man Andre Iguoadala (7.8 ppg). Throw in reserve center Festus Ezeli (4.4 ppg) and veteran point guards Shaun Livingston (5.9 ppg) and Leandro Barbosa (7.1 ppg) and the Warriors likely have the best bench in the game today this side of the San Antonio Spurs.Grade: AHouston: The Rockets also have a very good complimentary group of reserves starting with forward Corey Brewer (11.9 ppg) and either Josh Smith (12.0 ppg) or Terrence Jones (11.7 ppg), depending on which player starts.Veteran point guard Pablo Prigioni (3.0 ppg) has been rock steady for the Rockets off the bench as has veteran combo guard Jason Terry (7.0ppg).“We don’t get to this (point) if not for Trev, Brew, Josh, Dwight, and Jet,” Rockets coach Kevin McHale said on Sunday while acknowledging their part in the Game 6 finish that included a 40-15 Rockets run. “We don’t even get to today. … Everybody that stepped on the floor really contributed.”Grade: B

Golden State: Draymond Green is the heart and soul of the Warriors. He not only provides them with the leadership they need, but also gives his team a healthy dose of toughness and grit.Grade: AHouston: Houston’s best leader is undoubtedly veteran forward Trevor Ariza. The do-it-all, swingman can shoot the rock and score the ball, but it is his defense and ‘quiet storm’ demeanor that really gets the Rockets going – at least as much as any team can with the enigmatic Dwight Howard on its roster.Grade: B 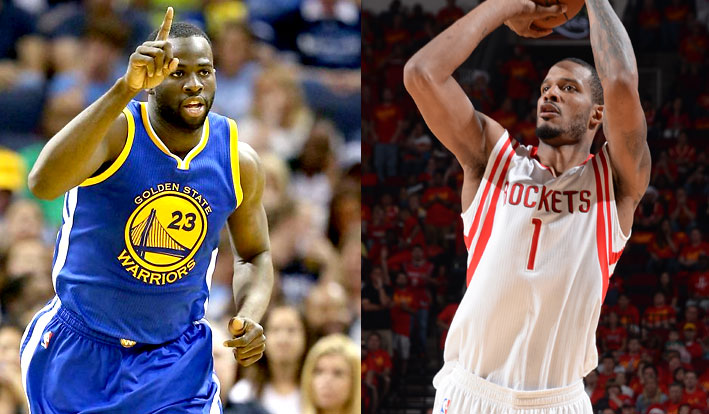 Golden State: Steve Kerr has been absolutely masterful in leading Golden State to a whopping 67 regular season wins and an appearance n the conference finals in just his first season. Still, Kerr was given a boatload of talent to work with, so…Grade: AHouston: I don’t care what anyone says, Kevin McHale’s decision to leave James Harden on the bench for the Rockets’ humbling Game 6 road win over the Clippers, I believe it was one of the gutsiest and best head coaching moves I’ve ever seen in four decades of following NBA hoops. I’ve got to show the former Boston Celtics superstar some serious love for his recent coaching decisions.Grade: B

Right now…the report card says that Golden State has the edge at point guard while Houston has a very slight edge at the shooting guard position. I give both teams a tie at the starting forward position.When it comes to the power forward spot, I give Golden State’s Draymond Green the very slight edge over Houston’s Terrence Jones or Josh Smith, depending on who’s starting while Houston center Dwight Howard is the undeniable winner at the center position.The Golden State Warriors have the big edge when it comes to reserves, but I’m going on record to say that the coaching matchup in this series is dead even.The Warriors are looking pretty good from where I’m sitting after winning the regular season series 4-0 – and winning each game by an average margin of 15.3 points.This fun-filled report card also suggests that the Warriors are well on their way to their first NBA Finals appearance since 1975 and I believe that is exactly what’s going to happen! SourcesESPN.com (http://espn.go.com/nba/player/_/id/3975/stephen-curry)NBA.com (http://www.nba.com/playerfile/dwight_howard/)
Older post
Newer post