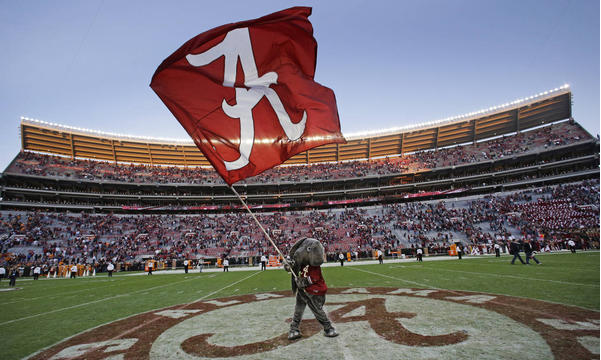 NCAA Football Betting News
With a record of winning at least 10 games in each of their last 7 seven seasons, coach Nick Saban and the Alabama Crimson Tide enter the 2015 season with high hopes of continuing to impress in the college football odds. The 2014 season brought mixed feeling to the fans, as the Tide started their year on a meddling form, but finished quite strongly to win the SEC West and SEC Conference titles. Things, however, didn’t end well for the Tide, who lost to Ohio State—the eventual national champs—in the Sugar Bowl. After such a season, what then can College Football betting fans expect from the Tide in the new season? Let’s find out by checking the preview prepared for you below.

Down to SIX … count them … SIX Saturdays! #RollTide #BuiltByBama pic.twitter.com/axPtezB6aj

The 2015 Alabama Roster in Perspective Over the recent years.

Alabama has consistently recruited the best talents in the league, so their 2015 roster will have a wealth of talent at nearly every position. Losing leaders in the team like QB Blake Sims, WR Amari Cooper and S Landon Collins will be tough to deal with. Even so, Saban’s team should be able to make the necessary adjustments, as they’ve repeatedly done every year. At the quarterback position, Jake Coker (a transfer from Florida State last offseason) figures to be at the front of the competition, which includes David Cornwell and Blake Barnett, along with Alec Morr and Cooper Bateman. Sims started all of Alabama’s games last year, so we didn’t get to see much of Coker, who only managed to haul 59 passes in relief duty. That should, however, change this season, with reports from the Tide camp indicating that Coker has shown a lot of progress in the practices and his skill-set being way above his competition.For the receivers, Cooper, DeAndrew White (40 catches last season) and Christion Jones (19 catches last season) won’t be available, but that shouldn’t be a problem, considering Saban brings an immensely talented group into the new season, including Chris Black, Cam Sims, Robert Foster, highly touted true freshman Calvin Ridley and star tight end O.J. Howard. And still on the offensive line, the Tide have a formidable group, returning with an experienced unit that includes Alphonse Taylor, Bradley Bozeman and Dominick Jackson, along with redshirt freshman Ross Pierschbacher, Cam Robinson and All-Star center Ryan Kelly.With Collins and Perry unavailable at safety, the likes of Hootie Jones, Tony Brown, Marlon Humphrey, and freshmen Kendall Sheffield and Minkah Fitzpatrick will need to step up to the plate in the team’s secondary. Talent is not an issue for all the above-mentioned players, so bettors can expect a strong group, irrespective of which players get the starting roles.

Hacking the SEC and a Tough Schedule in 2015

Alabama’s quest to win the program’s 16th National Championship in 2015 will come at the premium price of beating tough competition in the SEC. Just to mention a few, Les Miles and his LSU team have the best running back in the SEC in Leonard Fournette and a mean defensive unit. The Auburn Tigers pack a stacked group of promising and proven talent (including QB Jeremy Johnson, top-rated defenders in Montravius Adams and Dontavius Russell, and solid offensive weapons like WR D’haquille Williams and RBs Jovon Robinson and Roc Thomas), while Georgia, Missouri, Arkansas and Tennessee are all capable of challenging for the SEC Championship.Making matters worse is that Alabama has the fourth toughest strength of schedule in the nation in 2015, going against opponents that had a combined winning percentage of 62.34% from last year, which includes solid SEC title contenders like Georgia, Arkansas, Tennessee, Texas A&M, LSU and Auburn. So although the Bama team is overflowing with talent and boasts of a coach that knows how to win big, bettors must exercise cautious optimism when banking their hopes on the 2015 Crimson Tide unit.Predictably, Alabama will probably do well enough to be in the playoff conversation, but in order to go all the way to the National Championship game, they’ll need many of their pieces to fall in place befittingly, plus a ton of luck to be on their side, especially in regards to beating the tough SEC competition.
Older post
Newer post