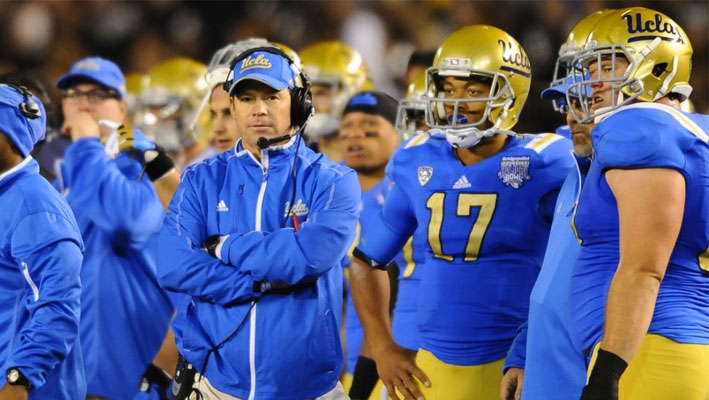 NCAA Football Betting News
In college football, trophies and championships matter a lot, especially to most managements, players and fans in various teams. However, for some diehard fans who like college football betting, beating a fierce rival can be ultimately satisfactory—sometimes way more important than winning trophies—as it helps in settling down old scores, claiming invaluable bragging rights, winning rivalry titles, and etching indelible new pieces of histories for future generations to gloatingly remember and talk about.With the increasing importance of college football rivalry games, particularly in determining winners of various divisions and conferences as well as placement in national rankings, meetings between rival teams continue to get tougher and fascinating with every passing year. This year’s college football rivalry week should thus be worth looking forward to. That being said, here are the top college football rivalry games of all time, so keep them in mind as we continue to wait for the 2015 edition of the NCAAF rivalries.

Arizona leads series, 48-39-1.Whereas this series has often not had much influence on the national college football picture, it is one of the oldest series of all time, dating back to the first meeting in 1899, and the competition between the two Arizona teams always guarantees entertainment and bragging rights for the fans. The winner of the rivalry usually gets to win the Territorial Cup.

USC leads series 46-31-7This rivalry was dominated by South Cal in in the 1990s and 2000s, including a remarkable stretch of wins by the Trojans between 1991 and 1998. However, the tide of this Southern California showdown has changed over the recent times, with UCLA Coach Jim Mora leading his team to three straight wins over their last three meetings against USC. Notably, the winner of this rivalry sometimes determines a berth in the prestigious Rose Bowl.

Navy leads series 59-49-7As if the names of the two teams are not connotative enough of the battle undertones in this rivalry, the Army-Navy clashes come with a lot of patriotic significances for our brave men of war, often exhibited by parades of Cadets and Midshipmen before the game. Football-wise, the two teams never disappoint as well, making it one of the most widely-followed and hotly contested rivalries of all time.

Texas leads series 60-44-5115 years since this rivalry started, nothing has changed about the hate between the fans and media attention it gets. The fact that both teams usually have to enter the field from the same tunnel has often led to a lot of squabbles between players, so a heavy presence of security officials is always evident in this Dallas-based the Cotton Bowl game. On many occasions, conference titles and national title bids have been decided by this game, making it a must-watch October event for fans from the two teams.

Notre Dame leads series 45-36-5With a reputation of arguably being the greatest intersectional rivalry nation, the Notre Dame-USC games are a beauty to watch. Just to mention a few reasons for its popularity, the rivalry often has national-title implications, more Heisman winners have played in this rivalry game than in any other rivalry, and the two teams are currently led by venerated masters of the game in Knute Rockne and Pete Carroll, thus making it every bit of the big deal that it is in California.

Michigan leads series 58-46-6The case between the two Midwestern rivals harbors nothing but pure unbridled hate for each other. And the fans, just like the players, often have no problem of turning the clash into fist-fighting when the football field fails to solve their grudges. With the boisterous Jim Harbaugh back at Michigan and Urban Meyer having a top-of-the-world ego after winning a national title for Ohio State, be sure that this rivalry will be rekindled in the lines of the Bo Schembechler and Woody Hayes in the 1970s.

Alabama leads series 43-35-1The regional tension, the talks about it, the strength of the two schools and the national implications that come with this rivalry, dubbed the Iron Bowl, is something that speaks for itself. Interestingly, the winner of this rivalry game over the last six years has had a shot at claiming the national title, so be sure to watch for this year’s winner if you want to have a good lock on the strongest national title contender from the Alabama area.