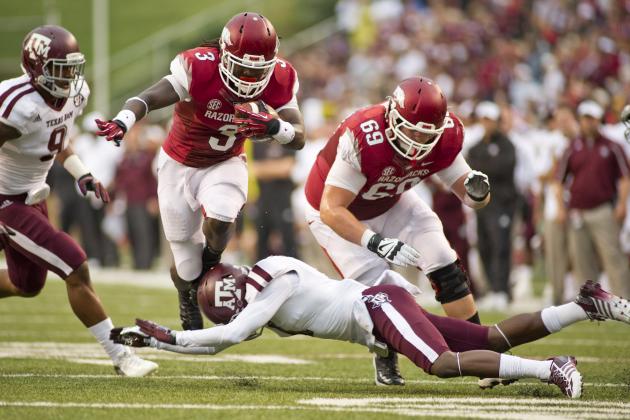 NCAA Football Betting News
Week 5 of the college football season is usually when a lot of the easier games are in the rear view mirror, which means the meat of the schedule is up and coming and the college football game lines get much tougher. That is very much the case for both the Arkansas Razorbacks and Texas A&M who meet up in Texas this coming weekend.

Let’s Break Down the Texas A&M vs. Arkansas NCAA Football Match Up

The game represents a real challenge for the Razorbacks. Arkansas is 3-1 so far this season, having been blown out by the Auburn tigers in the first week before laying the wood to the next three teams that they faced (Nicholls State, Texas Tech, and N. Illinois). They have racked up 174 points in those three games, but you have to wonder what they will be able to do against an Aggies defense that has been pretty stingy so far this season.In fairness, though, Texas A&M haven’t really faced any stiff competition since their impressive dismantling of South Carolina in week 1. Since then, they have efficiently disposed of Lamar, Rice, and SMU, with QB Kenny Hill posting some very nice stats in the process. This week is a little different, though, and they will want to put in a good shift against a stronger opponent, as the weeks ahead don’t promise to be so kind.In their next three outings after this one, the Aggies will face Mississippi State, Ole Miss, and Alabama. The Razorbacks are in the same boat, as their next two games after their Texas trip will see them take on Alabama and Georgia. This is a game that could provide a nice little bit of momentum for the tougher challenges that lie ahead.

Texas A&M come into this one as a 9½-point home favorite, with their results so far this season seeing them go 3-1 against the spread. That said, Arkansas are also 3-1 ATS, with the week one game at Auburn being the only time they failed to cover. The OVER/UNDER is set at 71.5, and that is where both teams have shown a definite trend so far. The Razorbacks games are 3-0 in favor of the OVER, while the Aggies are 2-1. The last three season have seen these two teams meet twice, with both games being OVER the points total. A&M are 2-0 SU, with the teams splitting the spread.The obvious bet here would seem to be the OVER, as there seems to be a definite trend in that direction for both of these teams. Given that both are putting up big points, the chances of this being a defensive struggle seem to be slim to none.
Older post
Newer post