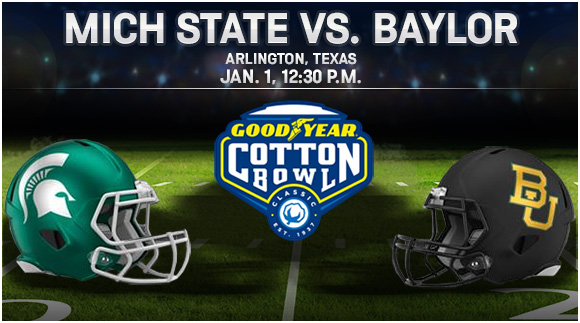 NCAA Football Betting News
The first day of 2015 is a big day for college football betting fans, as the playoffs get started in prime time. Before those big games get going, though, there are a trio of earlier bowl games that are well worth your attention. This is a good chance to pad your bankroll a little before laying some money on the big games in the evening. One of the earlier games promises to be a good one, as Baylor and Michigan State square off in the Goodyear Cotton Bowl.

The @GoodyearBlimp is taking a test flight around @ATTStadium getting ready to show off on New Years Day! #CottonBowl pic.twitter.com/pxlIAnkawq— Cotton Bowl Classic (@CottonBowlGame) December 30, 2014

Why Bet on the Baylor Bears

Fans of the Baylor Bears have been bemoaning the fact that they did not make it into the inaugural college football playoff, but the fact of the matter is that they can really only blame themselves. The 41-27 loss to West Virginia was huge, and when you combine that with the fact that they didn’t really play a non-conference game of note, you begin to see the evidence stack up against them. All of that aside, this is an entertaining football team to watch, as they do seem to love getting into shootouts. That’s what they may have to do yet again versus the Michigan State Spartans.

Why Bet on the Michigan State Spartans

You get the sense that if the playoff had been expanded to 8 teams instead of 4, these 2 teams would very much be in the mix. It probably came as a surprise to many that the Spartans finished the season with the record that they did. The one thing that was really missing from the season for Michigan State was a signature win over a big name program. Yes, the win against Michigan was nice, but if they could have added Oregon or Ohio State to that, their season would have looked a whole lot better.

Baylor come into the Cotton Bowl as a slight 2.5-point favorite in what could be a high scoring affair. The Bears went 7-4 ATS on the season, which included going 3-0 against out of conference opposition. Michigan State went 8-4 ATS, and also did well out of conference, going 3-1 ATS in those games. The Spartans are also a perfect 2-0 ATS in their previous two bowl outings.It would be altogether too easy to look at that high-powered offense that Baylor has and believe them capable of running over anyone. The problem is that the Spartans have a very balanced offense that can lead to long, time eating drives. If they put together a few of those and get some points on the board in the process, it could be a long day for Baylor. I like Michigan State in this one.
Older post
Newer post