NCAA Football Betting News
If you are reading this, then you must have probably seen the earlier article where we talked about our expected best Big Ten teams in 2015, complete with NCAAF betting predictions of their prospected records at the end of the season. If you haven’t seen that first article, well, I trust that you can find your way through this site to locate it, or better yet, just ask any of our staff who’ll be more than glad to show you around.Having talked about the best, this article will be focusing on the teams we expect to be among the worst performers in the Big 10 in 2015. I know it’s a hard pill to swallow reading about the team you support being listed here, but someone’s got to do it. So it is with grave reluctance–and also unfathomable glee–that I present this list of Big Ten teams that are likely to disappoint in the 2015 season.

These Are the Big 10 Team with the Worst College Football Betting Projections in 2015:

Fans in Evanston have been awfully quiet over the recent seasons, and if you were one of them, you’d understand their plight… This is a team that, after making successive bowl appearances from 2008 to 2012 (including a win over Mississippi State in the 2012 Gator Bowl), has regressed mightily, going back-to-back seasons without a bowl appearance. Coach Pat Fitzgerald, an inductee in the Northwestern Football Hall of Fame, is hoping to turn things around, and going by the competitive nature of his team since he started coaching the Wildcats 10 years, we can expect another good show from his team. Still, with major quarterback problems, a troubling injury history and a trying schedule (including Stanford and Duke outside the conference), it’s hard to expect much improvement from this team in 2015.

The Terrapins find themselves in a very difficult position in 2015, losing nearly all of the key components of their 2014 offense and defensive front seven. Whereas this could be a blessing in disguise for the team (as it could give a chance for the rise of new performers), the challenging 2015 schedule that includes Ohio State, Michigan State and Iowa (all on the road) doesn’t smell of hope or improvement. Some regression should thus be expected from their 7-6 (4-4) record in 2014.

After failing to win a single division game in 2014, the Hoosiers will need to find a way of making some noise in the East if they are to improve on their 4-8 (1-7) record from last year. Fortunately, Kevin Wilson’s team has a soft non-conference schedule that could see them improve on their win margin in 2013, especially if they can snatch one or two wins in the Big Ten East.

Losing lead wide receiver Mike Dudek to a season-ending ACL tear will certainly force the Illini to take a step back from their fun-to-watch passing game in 2014. Adding to their problems is a leaky defense that ranked at No. 116 in the nation in allowing plays of more than 20 yards in 2014. Therefore, even with a couple of interesting pieces returning to the team, the Illini look more likely to regress than improve from their 6-7 (3-5) campaign in 2014. 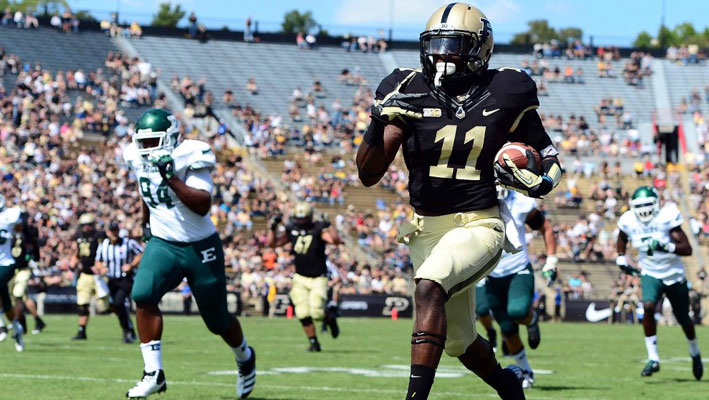 Darrell Hazell returns with an experienced group of starters, but this is a team that does not know how to win games. Essentially, that’s the reason they struggled in their three victories against Illinois, Southern Illinois and Western Michigan last season to finish 3-9 (1-7), just in the same way they struggled in in the lone 2013 win against Indiana State. So although their competitive edge will probably improve in 2015, it’s safe to expect another underwhelming season from the Boilermakers.
Older post
Newer post