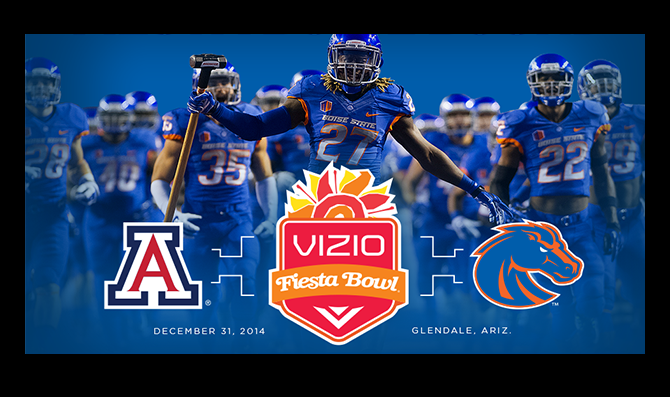 NCAA Football Betting News
Savvy college football betting fans know that the best bowl game match-ups tend to be those that feature a pair of teams with a bit off a chip on their shoulder and something to prove. That is exactly what we will get when the Arizona Wildcats and Boise State Broncos lock horns in the Vizio Fiesta Bowl at the University of Phoenix Stadium on December 31st.

Why Bet on the Boise State Broncos

Boise State are no strangers to this particular bowl game, as this will be the third time they have appeared in it since 2006. The Broncos will be wanting to prove that they can hang with the big boys, especially after getting roughed up by Ole Miss in the opening week of the season. Yes, they ended up going 11-2 and winning the Mountain West Championship game, but they did so by beating a laundry list of opponents that don’t really strike fear into anyone. That said, their offense was pretty much lights out along the way, only once falling below 37 points in games dating back to October. They will feel that they will get the recognition they deserve if they can knock off the Wildcats.

Why Bet on the Arizona Wildcats

Many felt that Arizona might stamp their playoff ticket with a win against the Oregon Ducks in the Pac-12 Championship Game. The odds looked to be in their favor, as they had been something of a bogey team for the Ducks over the past couple of seasons. Very few saw the 13-51 defeat that they were handed coming. That loss left the Wildcats red-faced, and left a bad taste in their mouths that they will very much want to wash out. This is a very good team that had some great wins during the course of the season, and a big bowl win should help remind college football fans of that fact.

Arizona are playing what essentially amounts to a home game, and they have been made 3-point favorites in the NCAAF odds. They were not a good bet throughout the season, going just 5-8 ATS, which included being just 1-2 ATS versus non-conference foes. Boise State had to overcome some very big lines this year, and managed to go just 7-6 ATS. That said, they were 3-1 ATS when facing teams from out of conference. Coach Rich Rodriguez is a master planner who will have his Arizona team well prepared for this one. Expect a high-scoring affair, but also expect the speed and talent of the Wildcats to be a little too much for an undersized Boise State defense. I like Arizona to win and cover.
Older post
Newer post