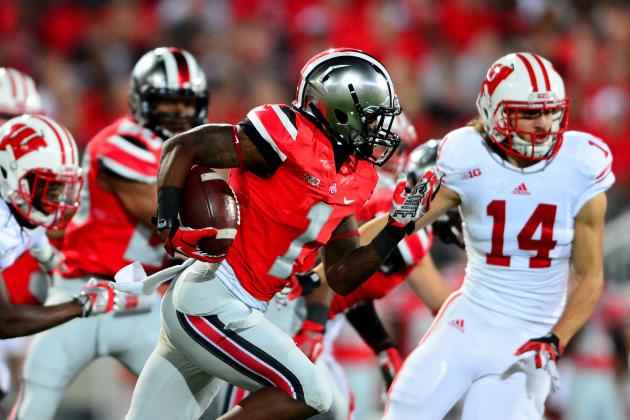 NCAA Football Betting News
The Ohio State Buckeyes fans are not a happy group, as the latest rankings from the college football playoff committee once again sees their team on the outside looking in. Strength of schedule appears to be taking a toll on both Ohio State and Florida State, which means the Buckeyes are going to have to impress when they take on Wisconsin in the College Football Game odds.

The one thing that might very well be standing in the way of Ohio State, other than that huge front line of Wisconsin, is the fact that they are going to have to go with a vastly inexperienced QB behind center. They had already lost Braxton Miller for the season, but didn’t miss a beat when T.J. Barrett came in and started mowing down records. He is now done, too, courtesy of a fractured ankle sustained last week versus Michigan. There is a very good chance that the Buckeyes are going to have to run the ball versus a defense that just doesn’t allow teams to do so very effectively. The Wisconsin Badgers don’t play what anyone would regard as a pretty style of football, as they make it known that they are going to just run the ball down your throat for 60 minutes. That no-one is able to stop them is a testament to how well they can do it. If Ohio State are to walk away with the championship and a shot at the playoffs, they are going to have to find a way to slow down the run game of the Badgers. Given the problems that Ohio State have at the QB position, it’s no real surprise that they have been made 4-point dogs for this one. They have only been an underdog on one other occasion this season, and were able to cover. They are 7-5 ATS overall on the season.Wisconsin is 5-7 ATS and has not fared particularly well in that regard when placed as a favorite. Ohio State is 2-0 SU against Wisconsin in the past three seasons, and are also 1-0-1 ATS.

All signs point to Ohio State being in trouble here, yet I cannot shake the feeling that they will somehow find a way to pull this one out. I don’t expect it to be pretty, but won’t be totally surprised if they win, which is why I am taking Ohio State +4.
Older post
Newer post