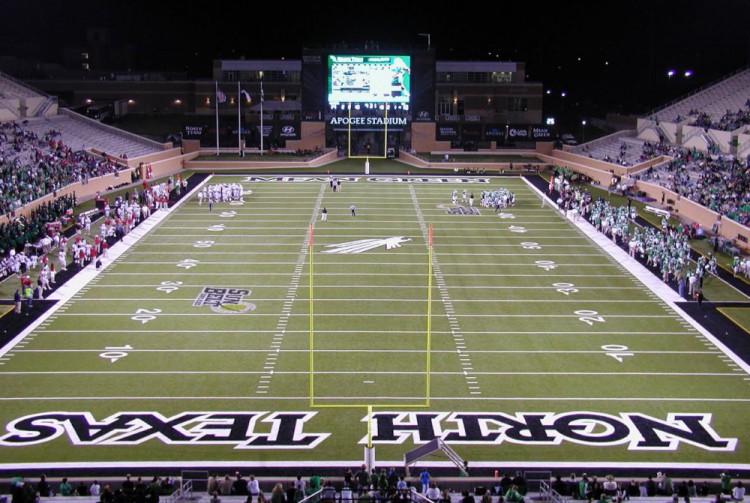 NCAA Football Betting News
The North Texas Mean Green will try to win their second game in a row when they face off against the Louisiana bulldogs, who are also going for their second straight win of the season. These two teams are 6-6 against each other all time; North Texas won their most recent meeting in 2013, 28-13, which means Louisiana Tech will be trying to get some payback by winning this college football odds match up.

Date: Thursday, September 11 at 8 PM. ET.Venue: Mean Green Stadium, Denton, Texas.NCAAF Odds: Louisiana Tech is a 3.5 point underdog in this game.Although these teams have played each other 12 times in the past, the game is not considered a real rivalry, because they last played each other in 1987, before starting over again in 2005, and since then, they have only met three times.

From a betting standpoint, Louisiana Tech seems like the logical choice to go with in this game, because they are 2-0 ATS this season, while North Texas is 1-1. Louisiana Tech is coming off a 48-20 victory over the University of Louisiana Lafayette, in a game in which they were 16 point underdogs. They put up over 500 yards of offense against the Ragin Cajuns, in a game they dominated from the opening kickoff. Their defense was a little shaky, they gave up 415 yards, but stepped up when it counted, and held ULL to 20 points.North Texas rebounded from a blowout loss to the Texas Longhorns, by defeating the Southern Methodist University Mustangs 43-6. The Mean Green defense stepped up against SMU’s struggling offense, forcing three fumbles and intercepting the ball twice. Their defensive dominance would have been more impressive if it came against a good offensive team, but since it was against an SMU team that has only managed to score 6 points in two games, it isn’t nearly as impressive.The Mean Green offense has also struggled in their first two games, and they will be in for a long day if they can’t keep up with Louisiana Tech’s offense. North Texas lost a lot of their starters from last year’s team to graduation, and has a lot of new and inexperienced faces on offense, which is why Louisiana tech is the smart bet. Louisiana Tech has experienced players on both sides of the field, who can’t wait to redeem themselves after losing at home to North Texas last year.It might still be early in the season, but this game has serious ramifications, the winner of the game gets to have a share of the Conference USA West division lead, while the losing team falls behind by a game in conference play. The bottom line in this game is neither team is very dominant, and they have both suffered humiliating losses, but from what I have seen so far this season, Louisiana tech is the smart bet in this game.Final Score: Louisiana Tech 27, North Texas 13.
Older post
Newer post