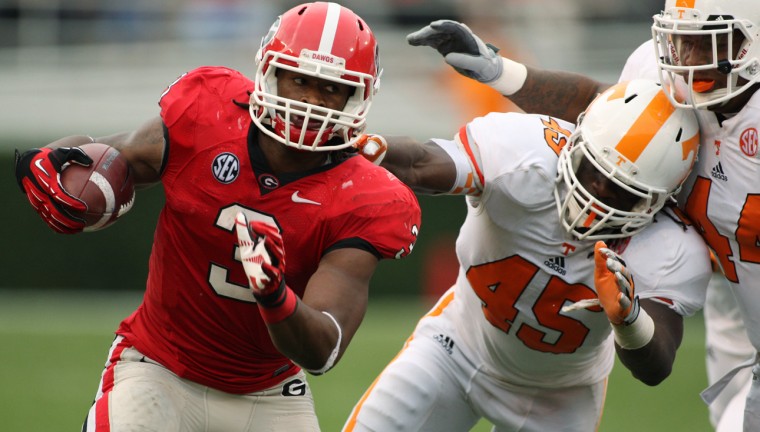 NCAA Football Betting News
One of the oldest rivalries in the SEC East is set to be rekindled this coming weekend, with the Tennessee Volunteers set to do battle between the hedges against the Georgia Bulldogs. In fairness, the rivalry has not been what it once was since the whole Lane Kiffin fiasco in Tennessee, but despite the long college football odds on Tennessee’s side, there are those who believe that the Volunteers are better than their 2-1 record might suggest.

The Georgia Bulldogs came into the season as the prohibitive playoff spot favorites of many pundits, and they certainly looked that way when they laid an opening week beating on Clemson. A loss on the road to South Carolina in week 2 changed the perception a little, but they bounced back nicely by trouncing hapless Troy 66-0 last week.The Vols won their first two games quite handily against Utah State and Arkansas State before running into a brick wall against Oklahoma. They have struggled somewhat in the running game, relying heavily on an air attack to get the job done. The Dawgs are the polar opposite, as they have beaten teams into submission on the ground, with running back, and Hesiman hopeful, Todd Gurley doing the majority of the damage.The Bulldogs are still missing some key starters at the receiver position, which means they are likely to go to ground again this coming weekend. If the Volunteers are to have any chance at all, they will need to stop the run and force the ball into the hands of Hutson Mason, the QB of the Dawgs. Both teams have created turnovers in each of their three games this season, so that may end up being a factor, too.

The current line sees Georgia in as a 17-point favorite, with the OVER/UNDER set at 55.5 points (Game totals and odds may change in the coming days). Going back to 1992 you will see that the Volunteers hold the edge in both straight up bets, as well as against the spread. They also possess a solid 7-3 record ATS in games played in Georgia during that time. Much of that success came pre Lane Kiffin, though, at a time when Tennessee were still considered an SEC powerhouse. This may be one game where the trends of previous years are thrown out the window.The outcome of this game could be decided very early on if Georgia are able to establish the run. The Dawgs have put up 146 points in their three games this season, with 80 of those coming against ranked teams. Look for Georgia to cover the spread and for the total to be OVER. Wanna bet on this game? Complete college football odds can be checked at Mybookie.ag.
Older post
Newer post