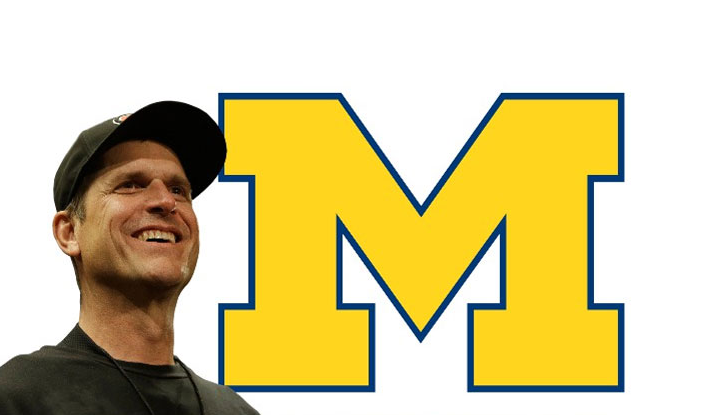 NCAA Football Betting News
Like most coaches in college football, Michigan Wolverines coach Jim Harbaugh is a highly-skilled tactician with a big appetite for winning. But unlike his counterparts, Harbaugh’s coaching style—his football innovations, philosophy about life both on and off the field, unequivocal honesty with undertones of a sly chess player, and his larger-than-life attitude—can make him a tough to figure out, as he often shifts his values paradoxically to suit the most important needs at the moment. Let’s see what’s ahead of him and  how he will affect the College Football Betting Odds.

Controversies are not his thing, but it seems like everywhere he goes, there is always a wind of disputations following him, of course with a bagful of high-quality achievements to vindicate his celebrity-status legacy. Take his last coaching stint with the 49ers, for instance. In a span of over four seasons, Harbaugh compiled a respectable 44-19-1 record for San Francisco, including a Super Bowl berth in his second season, three NFC Championship appearances and an adoring fan base that loves him to date. But when push came to shove in his wrangles with the team’s front office, he quit the job (or got fired, according to rumors) to take on another challenge in the college football odds.That’s how he ended up taking the Head Coach responsibilities with the Michigan Wolverines, a challenged team that is just 46-42 since Coach Lloyd Carr retired from the team. With so many chaos and issues to sort out, is Harbaugh way over his head on this one, or will he bring a new dawn to Michigan and restore them to their past glory? “Jim Harbaugh (is) comfortable in chaos,” answers ESPN’s Senior Writer Seth Wickersham in an article that he extensively profiles the 51-year-old’s journey into transforming the 49ers from cyclic low-achievers into perennial championship contenders. Aptly put by Wickersham, “His (Harbaugh’s) talent at turning losers into winners is matched only by his propensity to piss off people in the process.” That’s the type of man that will be leading the Wolverines this season.And it is not like he has never coached a college team before. Prior to making his leap into the NFL, Harbaugh coached at Stanford and San Diego, where he (as usual) posted a decent combined record of 58-27 record. More importantly, Harbaugh knows the ins and outs of Michigan, a place where he served as diligently as an All-America quarterback. And even back then, he was a big-talker with a fiery intensity and unmatched competitiveness, who punctuated his words with formidable results. A case in point is during the 1987 season where, as a Michigan’s start quarterback, he guaranteed the fans and his team that he’d lead the Wolverines to a Rose Bowl victory before the game. Come the end of that 1987 Rose Bowl clash, Harbaugh was on the winning side at the expense of their bitter rivals, the Ohio State Buckeyes.With such a history, and a genuine affection for his former team, it therefore serves to reason that Harbaugh could be the man to lead Michigan to a strong push for the 2015 NCAAF Championship when he coaches his alma mater. Irrefutably, the obstacles are many, and going by the disarrayed state of Michigan, he is likely to need more than a season to get the Wolverine house in order, particularly with the likes of Ohio State, Michigan State and Wisconsin not looking to be in a welcoming mode for Harbaugh in the Big 10 conference. Moreover, the Wolverines were late entrants into the 2015 recruiting class, so Harbaugh didn’t get enough pieces to transform his team. And with a 5-7 record from their 2014 season, it looks a bit too far-fetched to dream of Michigan making the cut for a top four finish in the nation.

The Year of Hard Work Has Begun

Nonetheless, Harbaugh accepted a $5 million yearly salary, saying that, rather than becoming the highest-paid coach in college football, he’d rather free up some money to pay his assistants. The clean-up and rebuilding agenda is underway, and as he often does, Harbaugh has sourced trusted and like-minded professionals to aid him in his vision. Former USC offensive line coach Tim Drevno (who spent 10 years as part of Harbaugh’s staffs at San Diego, Stanford and San Francisco) was the first to get the call-up, and he’ll be coordinating things in the offense, while D.J. Durkin (defensive assistant for Harbaugh at Stanford in 2007-09) will take charge as Michigan’s defensive coordinator.As far as returning players are concerned, Shane Morris (backup to starting quarterback Devin Gardner who is now gone) looked like the probable QB starter, but with the versatile Jack Coan newly committed to Michigan, all indications point to Coan getting the starting job. Michigan’s leading receiver from 2014, Devin Funchess, is also gone to the NFL, so the team will mostly have to rely on the backfield duo of Ty Isaac and Derrick Green. In the defense, the loss of senior linebacker Jake Ryan (the team’s MVP last season, a first-team All-Big Ten and a Butkus Award finalist) will be hard to replace. Nevertheless, the Wolverines will be bringing back a good number of defensive players, including last year’s top defensive recruit Jabrill Peppers, so they’d still be able to hold their own.In the recruiting department, Harbaugh found a good number of talented pieces, who could progressively link up with the returning starters to become impact players. Already, Harbaugh declared 2015 to be “The Year of Hard Work” in Michigan football, so some positive strides can be expected from the new coach and his new coaching staff. Even so, Michigan’s 2015 schedule is not too friendly, so we’d warn you not to balloon your expectations. In the Big 10, the Wolverines will host Northwestern, Michigan State, Rutgers, Ohio State, while the conference road games will come against Maryland, Minnesota, Indiana, Penn State. Out of the conference, the Michigan will take on Utah on the road (in the season opener on September 30) and then later play hosts to Oregon State, UNLV and BYU.Playing Michigan State and Ohio State at the Ann Arbor will certainly ease up things for them, while missing Big Ten giants like Wisconsin, Nebraska and Iowa will also help. Still, with their young squad that is (and will be) undergoing major development this season, dreaming of the national championship would be a bit over-ambitious.

The biggest guarantee for bettors in 2015 is that the Wolverines will definitely finish with a record better than the 5-7 mark posted in 2014 regular-season games. In the conference schedule, 4 of 5 wins look possible for Michigan, with at least 3 non-conference victories. So, as per our calculations, around 7 or 8 victories is more likely for Michigan in Harbaugh’s first season. For those looking into the future, 2016 could be the year the Wolverines go for it all, especially if they their new time to continue rebuilding the team. After all, this is the same team that produced the much-celebrated Tom Brady, and of course Harbaugh, so excelling to new heights and producing more stars when they have a genius of a coach should be possible, right? Yeah, I thought so too!
Older post
Newer post