NCAA Football Betting News
It’s never too early to start talking about NCAA Football. Spring practices have begun, and we know the football season will be here before you know it. Alabama edged Clemson a season ago, and now we are ready to talk about who is going to win the next national title. Let’s take a look at some early predictions for the 2017 College Football betting season.

No list should start without the defending champions themselves. The Alabama Crimson Tide have got to be considered for another national title. The Crimson Tide will have yet another rugged trip through the SEC, but of course if any coach is going to get them through it, it’s the legend Nick Saban. According to MyBookie.ag online sportsbook, the Alabama Crimson Tide are the favorites to win the championship, and you can grab them at +450.

Next on the list is the 2015-16 college football championship runner up. Of course, the Clemson Tigers led by Dabo Swinney are on the list. They are bringing their sensational quarterback DeShaun Watson back to the field. The Tigers are playing out of the Atlantic Coast Conference, where they should not have nearly the difficult time that Alabama has getting through. Clemson is second on the betting odds as a favorite to win the national championship, and listed at +650.

The Oklahoma Sooners are also on the list of early favorites for the coming season. Baker Mayfield, and the running back core of Perine and Mixon are back for Bob Stoopes and his Oklahoma Sooners. The Sooners are certainly the top favorite out of the Big 12. Oklahoma is disappointed with their blowout loss in the college playoff to Clemson, and will be hungry to revenge that game. The Oklahoma Sooners can be wagered right now to win the national championship at +700. 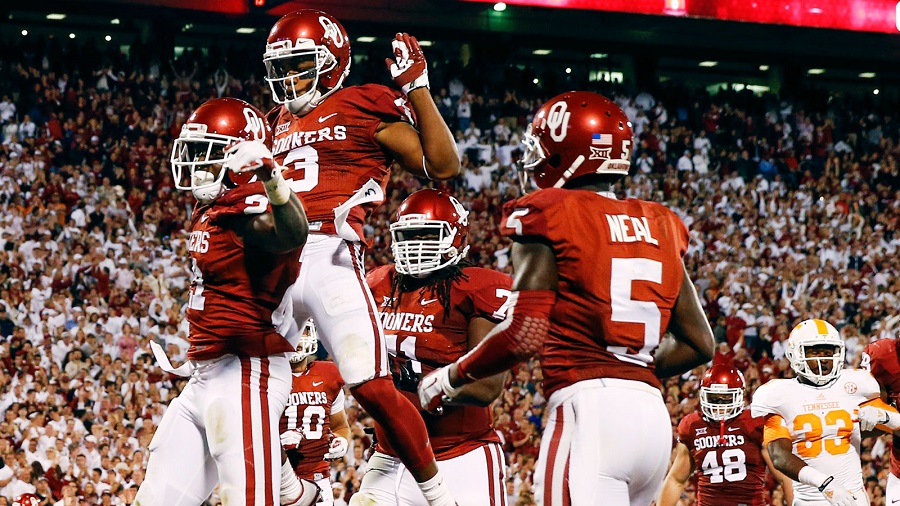 This list has got to include the team that has the best running back in college football. Les Miles was nearly fired as the head coach of the LSU Tigers a season ago, and now his team has one of the top freshman classes coming to town, along with talented players around them. The Tigers have to get through the SEC grind, including a matchup with Alabama, but they are fourth on the list as potential national champions for next season. LSU is listed at +900.

The final team we will discuss for a possible national championship is the Wolverines. Wow – According to the latest updates on the Michigan Wolverines, the team is already back to national title prowess, after their downfall a couple seasons ago. Coach Jim Harbaugh has been fantastic, and bringing in a ton of talent. They will compete alongside Ohio State as the beasts of the Big Ten. You can grab the Michigan Wolverines at +1000 to win the national title. That’s the same betting odds as the Ohio State Buckeyes.That was our look at the NCAA Football odds to win the 2017 National Championship. Just keep in mind that betting lines may change in the coming weeks, so stay updated and visit MyBookie.ag regularly for the most recent college football betting lines for the coming season.
Older post
Newer post