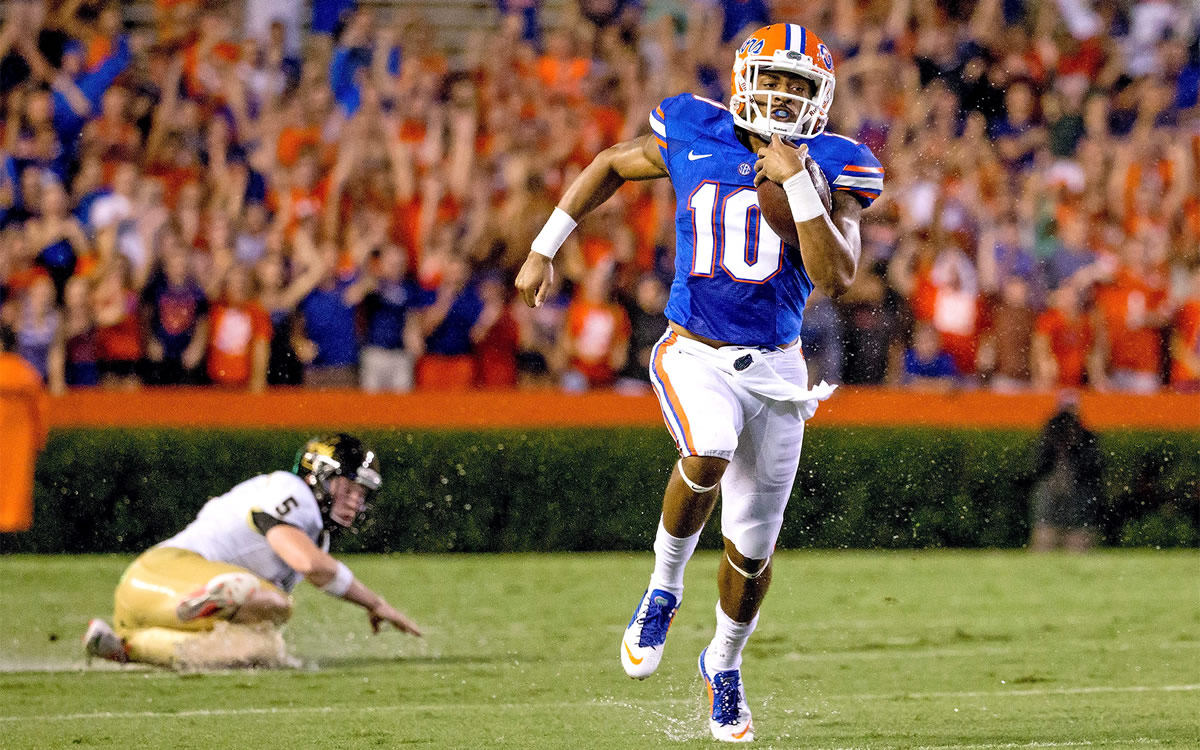 NCAA Football Betting News
The college football betting calendar for Week 4 features an interesting battle between two undefeated teams: The Florida Gators and the Alabama Crimson Tide. The Gators opened the season against Idaho in a game ruled as no contest after being suspended for inclement weather. The following weeks the team took down Eastern Michigan (65-0) and league rival Kentucky (36-30, 3 OT), both at home.Meanwhile the Crimson Tide opened the 2014 season in Atlanta with a 33-23 win over West Virginia, and then had an easier time of it in routs of visiting Florida Atlantic (41-0) and Southern Miss (52-12).

The Florida Gators needed three overtime periods to put away the Kentucky Wildcats on Saturday, which has a lot of college fans doubting just how good they are this year, while Alabama continued their dominance of non conference rivals, and are ready to kick off their SEC schedule in Tuscaloosa. This is going to be the first regular season meeting between these two teams in three years, which is a good thing for the Gators, because their program has fallen on hard times recently, while Alabama has been one of the best programs in recent years, and would have embarrassed the once proud Gators if they had met in the last three years. Alabama has won the last three meetings with Florida to take a 22-14 series advantage. The Gators’ last victory in Tuscaloosa was a 16-10 win in 1998.Alabama is 0-3 ATS this season, but they have won all three games convincingly enough. Florida is 1-1 ATS, with a convincing win against Eastern Michigan, and the triple overtime win against Kentucky.Florida has one of the highest scoring offenses in college football, scoring 50.5 points per game, which is 7th in the country. The team throws for 345.5 yards per game, which is 12th, and runs for 248 yards per game, which is 25th. Expect those numbers to decrease significantly against a good Alabama defense. Defensively Florida is ranked 16th, and have allowed 16 points per game. The numbers are a little misleading, because they shut out Eastern Michigan, one of the worst teams in the country in their first game, and allowed Kentucky to score 30 in their second game.Alabama had a tough time in their first game against West Virginia, but seem to have hit their stride, and are looking more like the Alabama teams of the past few years. Offensively they are very balanced, averaging 298 yards passing, which is 33rd in the country and 270.3 on the ground, which is 18th. They are also scoring 42 points per game, which is 26th in the country, so expect them to give Florida all they can handle on defense.For Florida to have a chance of winning this game, they will have to attack the Alabama secondary, which seems to be their biggest weakness, but that also means that quarterback Jeff Driskel has to play better than he did against Kentucky. The same goes for Alabama, they will have to attack Florida’s secondary to have success in this game, but will have to play close to the line of scrimmage, because Florida has a very good running game, and will exploit the Alabama defense if given a chance.

My Expert Betting Tips and Prediction

College football odds favor Alabama to win this game by 14.5-points, the problem I have with this line is that as much as I don’t believe Florida is as good as their record, they are still a tough football team, and even though they are going to be on the road in a place where they have lost three straight, Alabama is 0-3 ATS this year, and only defeated West Virginia by 10 points, so the spread might seem too high. Even if they fail to cover the spread, Alabama will still win this game, extending their winning streak against Florida to four games.
Older post
Newer post