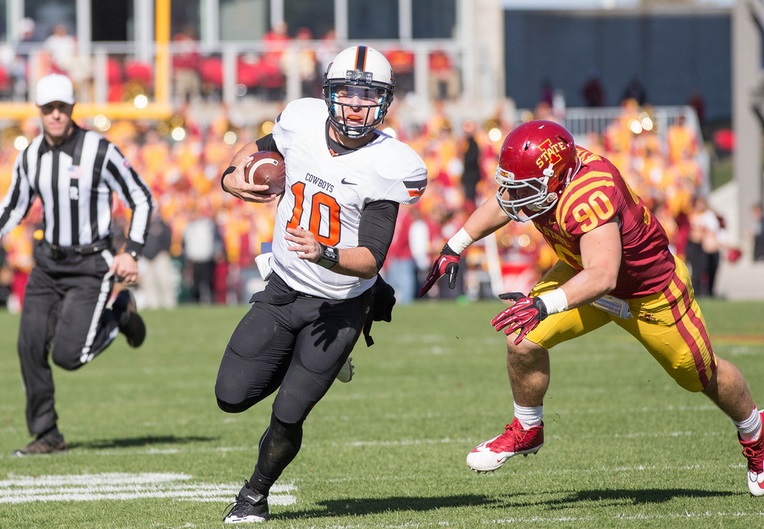 NCAA Football Betting News
The Iowa State Cyclones have been a huge disappointment from a football betting perspective. They have lost both of their Big 12 games so far this season and have been outscored by opponents 132-90.  They are also are last in the league with an average of just 104 rushing yards per game. Meanwhile Oklahoma State lost its season opener to the Seminoles, but also has been holding onto a spot near the bottom of the national polls.

Iowa State has a 1-3 record with their only win being a three-point win against Iowa. The Cyclones’ last game was a 49-28 loss to Baylor. Sam B. Richardson has become one of the more accurate quarterbacks in the game as he has a 68% completing rate. However, he has three interceptions to go with his three touchdowns. He is also tied with Aaron Wimberly for having 119 rushing yards.Oklahoma State has a 3-1 record with their only loss being by six points to the top-ranked Florida State Seminoles in a neutral site. The Cowboys started their Big 12 slate with a 45-35 win over Texas Tech. Quarterback Daxx Garman is hoping to be a dark horse candidate for the Heisman Trophy as he has 929 passing yards and eight touchdowns. However, his two interceptions may hurt his chances. The entire team has 687 rushing yards as well.

The Cowboys have won four of their last five games against the Cyclones. The Cyclones have won three of their last four Big 12 games against the spread. Their last one was a push as they were listed at +21. The only time the Cyclones were favored this year was when they were -6 favorites against the FCS champion North Dakota State. The Bison still won their game 34-14 at the start of the season.Oklahoma State has struggled in games with large spreads. They did not cover a -14.5 spread in their game with Texas Tech. They were favored -33.5 to Missouri State but only won 40-23. They have taken the over in each of their games so far this year though.

The Oklahoma State Cowboys are -17 favorites to win the game with a -110 payout for all bets. There are no over/under bets available at this time. Also, straight up bets may be hard to find but the places that do offer them will list the Cyclones at +550 to get a win in this game.The biggest concern for Iowa State is the team’s lack of a running game. The Cyclones have 104 rushing yards per game, one of the worst in all of college football. Meanwhile, the Cowboys have 171 rushing yards per game and close to 300 passing yards too. Expect the Cowboys to edge out the spread and get a 40-13 win.Game Odds:IOWA STATE : +17-110OKLAHOMA STATE: -17-110

Oklahoma State is already in the middle of some tight competition to try and make it to the top of the Big 12. Oklahoma and Baylor are ranked much higher than the Cowboys. The Cowboys should have a chance to improve their stature this week. The big question for most college football betting fans comes from how Iowa State is going to try and recover. They will have seven games after this one but will need to start winning games if they ever want to improve their record.
Older post
Newer post