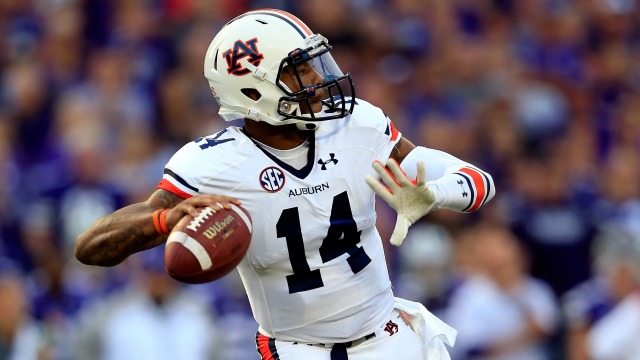 NCAA Football Betting News
Before the college football season began, there were many who thought that Auburn were a shoe-in to become one of the teams making it into the first ever college football playoff. They have been pretty convincing this season, and have dominated their rivals week after week, becoming a favorite team among bettors looking for safe college football betting picks. The Tigers currently hold the #5 position in the AP poll, but they really have a great chance to improve their position this week (even more if the higher ranked teams lose, of course) when they welcome in 2-2 Louisiana Tech Bulldogs.

How To Bet the Tigers vs. Bulldogs NCAA Football Odds & Game Info

The Tigers have a perfect 3-0 record, but it’s fair to say that they have been more efficient than brutally explosive. They have relied heavily on a balanced attack, with both the pass and running game putting up impressive numbers. This is likely to prove to be a real challenge for a Louisiana Tech team who will be looking at damage control as opposed to springing an upset. What is sure to be alarming for Tech fans is that they are coming off a loss to Northwestern in a game where they were favored by 23 going in. Ironically enough, that game represented the only time they have been unable to cover the spread this season.Auburn put up good numbers in their first two games, but, as expected, the Tigers were made to work hard for the win against Kansas State. They were able to pull that one out behind a stifling defensive effort that included Kansas State being held to just 40 yards on the ground. If they can do that to a good team, just imagine how ineffective the run game from Louisiana Tech might prove to be.

It’s no real surprise that the Auburn Tigers come into this one as 32.5-point favorites, with many actually seeing that number as being a little low. The OVER/UNDER is set at 61, and you have to think that Tech might need to put some points on the board in order for that to be surpassed. These two teams have not met in the past three seasons, but if you go back to 1992, you will see that Auburn has a perfect 6-0 SU record. They are also 3-2 against the spread, while the 1 game that was subject to OVER/UNDER betting saw the OVER win the day.This is a game that could very well be over early, especially if Louisiana Tech is unable to move the ball against the Auburn defense. That might mean seeing second and third stringers get a run out for the Tigers. That all adds up to me being a little nervous about choosing OVER in this one. The number I do like is Auburn to cover that spread, as I seeing them taking this one by 40.
Older post
Newer post