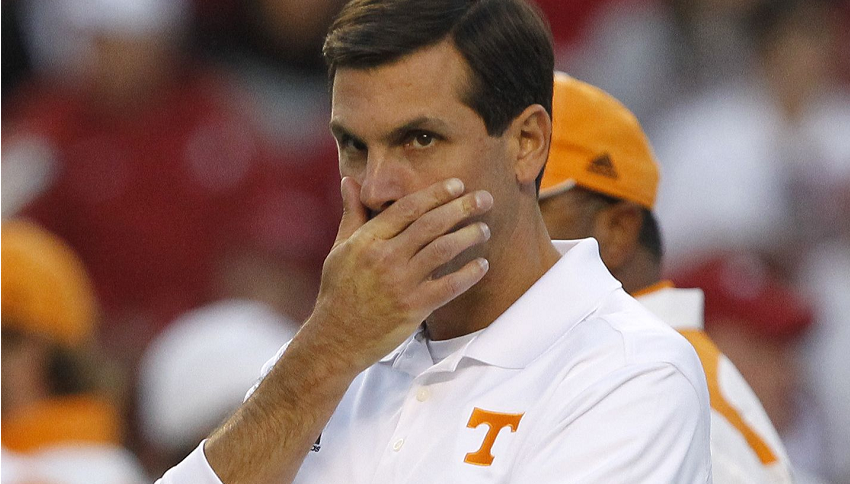 NCAA Football Betting News
Can memory serve any of us right by taking us back to when Dennis Franchione was one of the hottest coaching commodities in College football betting? At the time, he was oozing with charisma that allowed him to serve football powerhouses likes of TCU (1997), Alabama (2000) and Texas A&M (2002). But 15 years later today, time has passed and things have changed to the point that it would be laughable for teams like Florida or Oklahoma to hire Franchione. That is what makes football coaching so interesting. Only by judging a coach over a given long period of time that we can identify the great, lucky or poor coaches. Looking at some coaches right now, it is hard to believe that they are the same people who had the winning DNA a few years ago. While coaches such as Nick Saban, Urban Meyer, Pete Carroll and David Shaw have lived to become the stellar brands they were tagged, others—like the ones listed below—have turned out as the antithesis of their expectations.

Teams Coached: Iowa, MaineOver his 16-year career at Iowa, Kirk Ferentz has achieved a good measure of success as the head coach. These include conference titles in 2002 and 2004, and three consecutive number 8 finishes in the final Associated Press poll between 2002 and 2004. But the problem is, since 2004, nothing major has happened under his leadership. The last time they were ranked was in November 2010, when the AP placed them at number 24.Just a week later after that ranking, they were out losing to the unrated Minnesota 27-24. 1n 2012, they had their worst season since 2009, going 4-8. With the plummeting of Ferentz’ career, we are left wondering if he should have tried out NFL coaching when the odds were still in his favor.

Teams Coached: Texas Tech, Washington StateAt the peak of things for him in his time at Texas Tech, Mike Leach was one of the hottest sensations in college football. On the backdrop of an 11-2 finish in 2008, he made the Red Raiders compete with the heavyweights, despite having a budget that was half that of their competitors and a much-inferior recruiting power. So celebrated was Leach that he was basking in the limelight, with top media such as New York Times to Texas Monthly chasing after him. It took barely a year for everything to come crashing down on him. In 2009 following the Adam James controversy, Texas Tech showed him the door.He spent the next two years away from the touchline, until Washington State rescued him out of the rubbles. His three years in Pullman have been a real struggle, as he has only managed to compile a 12-25 overall record and a mediocre 7-20 mark in Pac-12 play, compared to his 84-43 overall and 47-33 conference marks with the Red Raiders. Talk of tumbling from being a football god to a fallen angel.

Teams Coached: Louisiana Tech, South FloridaThinking of any other young coach who seemed to have a long term successful career than Holtz is a tough thing. When he became the head coach at South Florida, things were soaring high, marked by an 8-5 finish in 2010. The following two years, he took a nose dive, going 5-7 in 2011 and 3-9 in 2012, and by December 2012, he was jobless.He was not out in the cold for long, though, as Louisiana Tech hired him soon after that. He started off the Bulldogs with a 4-8 mark in 2013, and things were much better for him last season, ending at 9-5. Nonetheless, it will take time before the odds of the big fish such as Texas, Alabama and Notre Dame can consider him for hiring.

Teams Coached: Tennessee, Georgia and LouisianaIn the year 2009, it seemed as if all one could see when tuning in to the weeknight college football game on ESPN was head coach Derek Dooley of the Bulldogs. The Dawgs were featured three times that year. But on the field, there was barely anything to show for him being heralded as a genius. 2 of his 3 years with the Bulldogs ended in losing records. The guys at Tennessee seemingly weren’t paying attention to the losses, so despite the two out of three losing years with the Bulldogs, he landed a covet job with the Vols.There, he lasted three years, managing just one conference win in two years, which came in a scrappy 27-21 overtime win over Vanderbilt in 2011. Right now, his name, though respected in some low-tier circles of college football, is more like plague for teams looking for serious competition and high levels of success.
Older post
Newer post