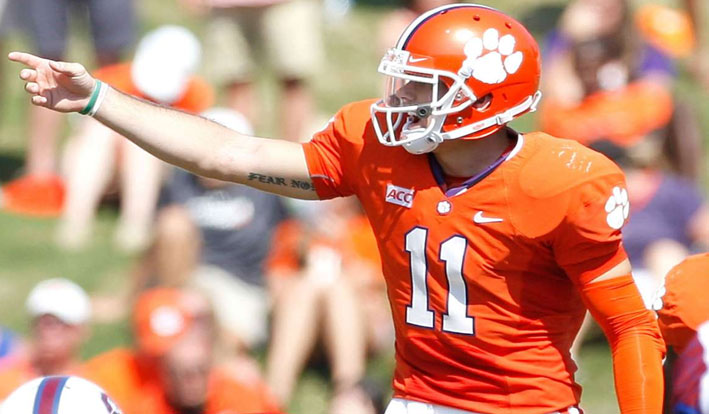 NCAA Football Betting News
Transfer players are becoming more and more common to College Football betting, and as the 2015 season approaches there are quite a few talents who will be appearing for new teams. Some will have monster seasons, while others might be that missing piece in transforming a middling team. The players in this article are not the most talented players, but instead the ones who will impact their teams most profoundly. If you think back a few years, consider Russell Wilson’s transfer to Wisconsin. He did a graduate transfer after three years at North Carolina State. In his season as a Badger, the team won the Big Ten and competed in the Rose Bowl, and now Wilson is a star with the Seattle Seahawks. Cam Newton transferred to Auburn and helped them win the BCS National Championship. It turned out to be a good decision personally as well, as Newton took home the Heisman Trophy and went #1 in the 2011 NFL draft. Some other famous transfers who then won a Heisman include O.J. Simpson, Mike Rozier and Roger Staubach. Josh Heupel transferred to Oklahoma University before taking them to a BCS title in 2000. So here are some of the transfer players who will have the biggest impact in 2015.

Sportswriters in the know are predicting Baker Mayfield to take the starting job away from Trevor Knight. Knight did make 10 starts in 2014 for the Sooners and put together a dominant show against the Alabama Crimson Tide in the 2014 Sugar Bowl, but Mayfield is impressive. At 6’2, 214, he is a great fit for the Air Raid offense that new offensive coordinator Lincoln Riley has installed. At Texas Tech, Mayfield completed 64.1 percent of his passes for 2,315 yards and 12 scores, earning the Big 12’s Offensive Freshman of the Year award. Dede Westbrook is also transferring to OU, a wide receiver from Blinn Junior College. He gives Mayfield a third option along with Durron Neal and Sterling Shepard.

Jovon Robinson might be the most talented of any of the transfer players in the nation this year. At Georgia Military College, he ran for 34 touchdowns and 2,387 yards in 2013. Injuries slowed him in 2014, but he still demonstrated a mixture of speed and power that had Division I coaches all over the United States trying to get him to transfer. Auburn has a history of big rushing attacks, and Robinson could end up in the discussion for the Heisman Trophy this year. Robinson’s transition will be helped by the fact that he won’t be expected to come in and carry the load all by himself, though. He joins five-star running back Roc Thomas, who picked up 214 yards in 2014 as a true freshman. Sophomore Peyton Barber and incoming freshman Kerryon Johnson will also get some time.

After Ole Miss upset #3 Alabama, 23-17, in October 2014, they became one of the favorites in all of college football. The team would run out to a 7-0 record, although ultimately faltering to finish 9-3. However, given what the team kept, Ole Miss could be even better in 2015. The key loss was quarterback Bo Wallace, who graduated, and Chad Kelly is the most likely candidate. He led East Mississippi Community College to the JUCO national championship, passing for 3,906 yards and running for 446 more. Kelly started out at Clemson, but he has picked up the tools that should help him compensate for an iffy running game. Transfer wide receiver Damore’ea Stringfellow is coming from the University of Washington and will give Kelly another option.
Older post
Newer post