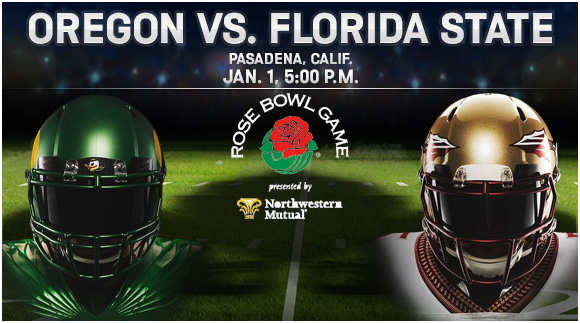 NCAA Football Betting News
All of the talk coming into this college football season was about the first playoff in the history of the game. It’s something that the fans have been requesting for years, and now the wait is finally over. The first day of 2015 is when the action will finally get underway, and it all begins with a match-up of the defending champion Florida Seminoles and the Pac-12 champs, the Oregon Ducks. Who has the edge heading to this must win match? Find out in this game preview, and view the college football odds and prediction for this game.

How To Bet the Ducks vs. Seminoles 2014 Rose Bowl Odds & Game Info

Why Bet on the Oregon Ducks

The fate of the Oregon Ducks was not decided until the Big 12 Championship Game, as they had to go out and knock off an Arizona team that had their number over the previous couple of seasons. The Ducks were able to come out in the bi game and totally impose their will. What followed was a total dismantling of the Wildcats, and a number 2 seeding in the playoff. This is a team that can score at will, and if they can get up early or force Jameis Winston into making the bad decisions that have plagued him all year, this could be over very early.

Why Bet on the FSU Seminoles

It’s been a strange sort of season for Florida State, as they have gone unbeaten, extending their win streak to 29 in the process, yet still only occupy the number 3 spot in the playoffs. Part of the problem for the Seminoles is that they did not look very pretty on their way to going unbeaten. They dodged more bullets than Bruce Willis in the Die Hard series, and had to find ways to come from behind almost every single week. They were most certainly not the overpowering team from the year before, and a slow start against Oregon could spell doom.

The ability of Oregon to beat teams with speed, power, or a combination of both is what sees them as an 8-point favorite here. The Ducks were 9-4 ATS this season, but perhaps more impressively, they were 6-1 ATS versus teams with winning records. Despite going unbeaten, Florida State were only able to go 3-10 ATS on the season. Worse yet, when they had to face non-conference opponents, they laid an 0-4 ATs duck egg.The habit that Florida State have developed of digging out of a hole is not one that they are going to be able to continue at this stage of the season. Oregon are just too good to allow the Seminoles to recover when they have them on the ropes. I don’t see this one being overly competitive, and like the Ducks to win and cover the college football spread.
Older post
Newer post