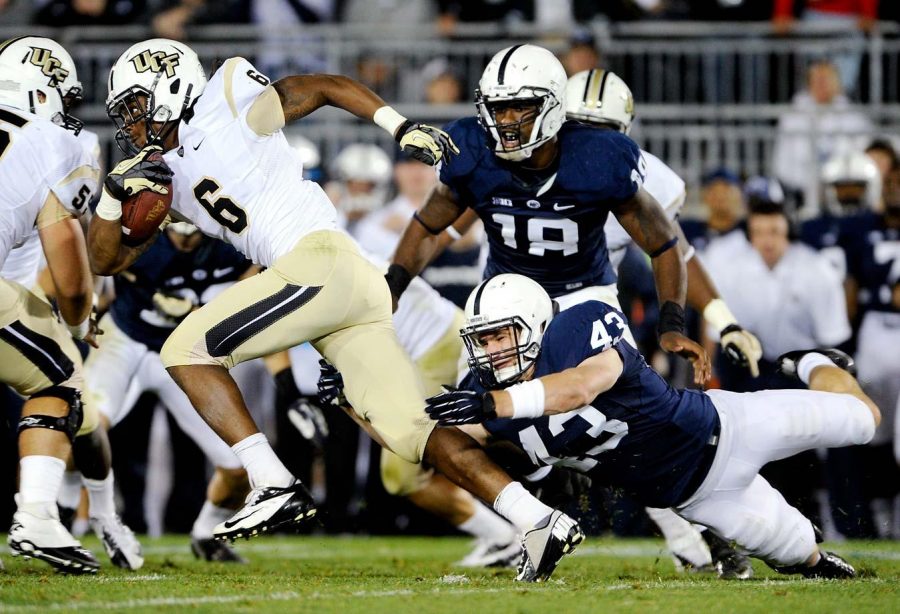 NCAA Football Betting News
On Saturday, Sept. 20, at 4:00 PM ET, the Penn State Nittany Lions will take on the Massachusetts Minutemen in the Week 4 schedule of college football. Going by their recent form, an entertaining encounter is expected from the game, which is set to be played at the Beaver Stadium, University Park, PA. To keep up with the lines for this game make sure to check out the College Football Odds portal.

Why Bet on the Penn State Nittany Lions

Having gone down by a 10-point deficit before pulling a surprising 13-10 victory against the Big Ten Conference debutants, the Scarlett Knights, confidence reigns high in the Lions’ camp. On top of that, the team enters the game as 26½-point favorites according to the college football odds. Furthermore, Christian Hackenberg was in great form in the game against the Knights, engineering Penn State’s last-minute victory by completing 25 of 44 passes for 309 yards. With such a strong player spearheading the Lions’ offense and receivers like Geno Lewis and DaeSean Hamilton putting in great work, the Minutemen defense would have to work overtime if they are to stop Penn State’s offensive game.Defensive-wise, the Nittany Lions have been admirably impressive. This was especially typified in the vaunted defense system that intercepted Rutgers quarterback Gary Nova more than five times. If both the defense and attack can rise to the occasion, as expected, then the Nittany Lions fans will be celebrating a 4-0 record at the end of Saturday’s football game.

Why Bet on the UMass Minute Men

On the flip side, the Minutemen have a lot to prove in Saturday’s game, especially after last week’s terrible 34-31 loss to Vanderbilt. Despite the loss, many football analysts believe that the Massachusetts team won’t be pushovers, so the Lions should anticipate a competitive game.Like he has shown severally, quarterback Blake Frohnapfel has the capacity to inspire the Minutemen into victory. A 13-yard touchdown combined with the completion of 17 of 34 passes for 205 yards in the previous game is enough proof of Frohnapfel potential, if given a chance. The fact that the Lions had to come from 10-points down in last week’s win shows that their defense is far from water-tight, hence can be breached. Nevertheless, Massachusetts will still have to work on its offense if it is to have a fighting chance against Penn State’s defense.In last week’s game, Tajae Sharpe had 73 yards in eight catches. It therefore goes without saying Sharpe’s usual emphatic aerial presence is bound to cause some problems for the Nittany Lions.

With a strong team spirit and a number of inspirational players, the Minutemen will definitely be a force to reckon with. However, the 3-0 winning streak of the Lions (in comparison to Umass’ 0-3 record) gives them a better chance to take the victory, hence making Penn State an absolute favorite to win Saturday’s game.
Older post
Newer post