NCAA Football Betting News
Welcome to the mighty SEC East division, a residing place for a number of football heavyweights, but a dominant home to none! Over the last decade, NCAAF betting fans have seen the division title shiftily change hands between Georgia, Kentucky, Florida, Missouri and Tennessee, with the duo of South Carolina and Vanderbilt mostly settling for the role of pace-setters. As things currently stand after various offseason developments in the division, the Gamecocks and Commodores still don’t look like they’ll be breaking the ceiling that has limited them from rising atop the division, with the Wildcats and Gators also joining them at the bottom of the SEC East.

If the Tennessee Vols want to win the SEC East, these are 5 things they must do: http://t.co/FCqEKBlGTQ pic.twitter.com/1KFEikuupw

So rather than spending our time talking about Florida, Vandy, South Carolina and Kentucky (who are mostly about basketball these days) and their college football odds to win the SEC East title in 2015, we’ll simply wish them all the best and focus our unbridled attention on the real divisional contenders in Missouri, Georgia  and Tennessee. Without further ado, let’s get down to real business, shall we?

Since winning the SEC title in 2005, the Bulldogs have come close to challenging for the conference title, but they always shoot themselves on the foot. Coming off a season where they went 10-3 (6-2 in SEC), the Bulldogs were a bit of a disappointment, losing cheap games to South Carolina and Florida that cost them a shot at the division title. If they are to improve in 2015 and get a chance at the SEC East crown, the Bulldogs will need to assert their dominance in a better way.Casting aside the memories of 2014, the Dawgs return 12 starters (7 in the offense and 5 in the defense). Losing Todd Gurley may look like a big loss to the team, but it won’t matter as Georgia has a solid replacement in heavy 2015 Heisman Trophy candidate Nick Chubb and a super-talented backup in Sony Michel. As a freshman who was playing second fiddle to Gurley, Chubb had an amazing year, rushing 215 times for 1,547 yards and 14 TDs, while Michel impressively averaged 6.4 YPC in 2014 and collected 5 TDs also as a freshman.The quarterback job is still in question, but the pedigree of new offensive coordinator Brian Schottenheimer (a former Florida QB) should help the Dawgs make the right decision.Schedule-wise, Georgia will be facing monster games against Auburn (at Jordan-Hare) and Alabama (in Athens) from the SEC West division. Hosting South Carolina and visiting Tennessee may also prove a bit challenging, though with the vast talent in Georgia, the Dawgs should be able to feature strongly, taking care of the in-division games and probably sneaking away with one win from either the Tigers or the Tide. Outside the conference tests, the Bulldogs have a joke of a non-confeerence schedule with Georgia Tech being the only eye-raising test. A 4-0 run in the non-conference schedule should thus be very possible for the Dawgs.

After winning the 2014-15 SEC East division title with a strong 11-3 (7-1) record, the Tigers return with ambitions of hoisting the title again. Most notable of the returning starters are quarterback Maty Mauk and running back Russell Hansbrough, two strong offensive starters that are likely to make Mizzou a force to still reckon with in the division.In addition, the Tigers have a tried-and-tested coach in Gary Pinkel, who was led the team to 23 wins in the last two seasons and back-to-back SEC East division titles.Unfortunately for the Tigers, they lost their efficient long-serving defensive coordinator Dave Steckel. The key tenets of their solid 2014 team are also gone, with All-SEC ends Shane Ray and Markus Golden plus star safety Braylon Webb drafted in the NFL. Meanwhile, the offense suffered heavy losses at the wide receiver position, with Bud Sasser, Jimmie Hunt and Darius White all out of the team. In total, Missouri lost 23 roster players from last season, 22 of them being seniors with Ray as the exception. With such a depleted squad, it’s hard seeing the Tigers making the cut as repeat champs in 2015.

Returning with an SEC-leading total of 18 starters (10 in the offense and 8 in the defense), the Vols are the biggest sleepers of the SEC East title in 2015. Of course, going just 7-6 (3-5) in 2014 doesn’t orient a lot of confidence in their winning abilities. However, the experience from last season’s starters (who were quite young in 2014 but are matured-up now) gives them a better chance at contending strongly in the division. The returning starters will particularly benefit from a strong quarterback play from Joshua Dodds, one of the highest rated QBs in the SEC. After an impressive performance in 2014, Dodds should be able to accomplish better things this year. 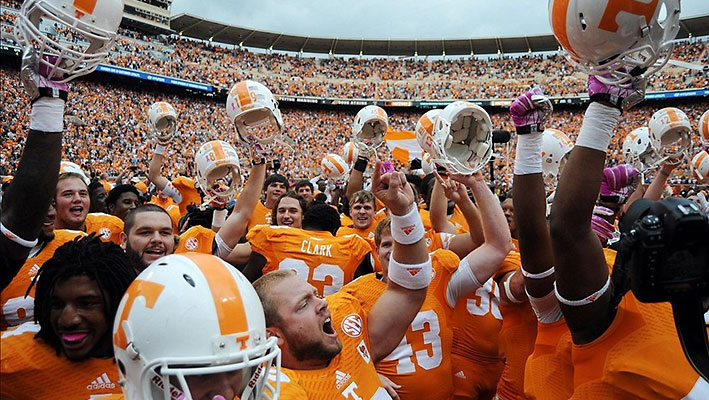 Moreover, coach Butch Jones has done a tremendous job in retooling the talent box in Knoxville, so the Vols will be buoyed by a strong backup unit in the new recruits.Considering such talent and a good coaching unit, combined with the motivation of winning four of the last five games in 2014 (including a blowout win over Iowa in the Taxslayer Bowl), the 2015 Tennessee team will be a squad to watch.

Based on the above analysis, we are strongly convinced that the Bulldogs will top the SEC East in 2014, closely followed by the Volunteers and Missouri. The Gamecocks, Gators, Wildcats and Commodores should be able to follow, respectively.
Older post
Newer post