NCAA Football Betting News
Even with all the criticisms against them, it would be hard to deny that SEC has some of the best players, schools and great facilities in college football. However, the SEC is facing a two-year national championship drought having lost it to the ACC in 2013 and Big Ten in 2014. All the same, we are in a new year and the SEC has already hit the ground running, as they battle to return to National Championship relevancy. Of course, it is not going to be walk in the park this year, with the likes of TCU, Oregon and Ohio State looking really good, but with adequate groundwork, the SEC can be hopeful of a fair fighting chance. With that, here is a breakdown of some of the elite SEC programs’ best and worst-case scenarios as they seek to make good value of their NCAAF betting odds to win the 2016 CFB National Championship.

Although the Crimson Tide failed to take advantage of being the No. 1 seed in the inaugural NCAAF playoffs to win national title last season, they still managed to have a good season by most standards, winning both the SEC West divisional title and the SEC Conference title. For Alabama to improve, the priority will be to figure out their QB situation and solidify their defense that got torched in a humiliating way by the Buckeyes in the playoffs. Outside deciding a regular starter out of Jake Coker, Alec Morris, Cooper Bateman, David Cornwell and Blake Barnett, who are all vying for the QB spot, the RB duo of Derrick Henry and Kenyan Drake must give a god measure of offensive support.Defensively, the Crimson Tide will be boosted by the proven skills and creativity of having the experienced Mel Tucker, who was hired from NFL, to strengthen the team for a National Championship title chase. Of course, the priority for Nick Saban will be to find a way of defending the pass and rushing, a department that struggled last season.All in all, the current Alabama squad, led by the mercurial Saban, will be tough to play in the SEC, with the divisional and conference title looking attainable for them. However, with no solid go-to guy at the QB role, it doesn’t look like Alabama will be able to go all the way to win a national championship this season, even if they somehow do enough to claim the SEC title.

Despite facing a strong competition from Alabama in the SEC West, Auburn has been placed by many Sportsbooks as the favorites to win this year’s SEC West divisional title and possibly the conference title as well. As the 2010 National Champions, the Tigers have a proven pedigree to beat the best, so working their way up the conference should be possible. To propel their high ambitions, they hired the stellar services of Will Muschamp to take charge of the defensive responsibilities in the team, and Auburn’s defensive line is already looking good because of it.Moreover, with the return of DE Carl Lawson and elite freshman Byron Cowart in the defensive lineup, the Tigers defensive game is highly likely to get better at the back. Offensively, QB Jeremy Johnson, who has previously shown signs of brilliance in the Tigers offense, will take the lead as he fills up the void left by the graduated Nick Marshall. With more balance in both the offense and defense, the Tigers are legitimate contenders not just in the SEC, but in the national arenas. All that will, however, depend on their ability to win big games, including their date against the Crimson Tide in the annual Iron Bowl. 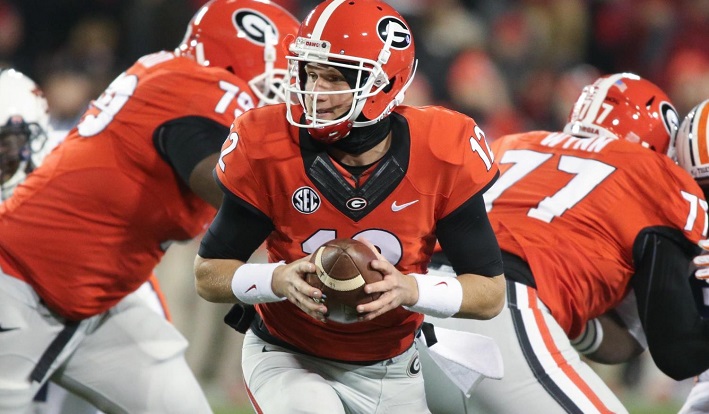 Just like fellow rivals Alabama, the Georgia Bulldogs have a quarterback situation to deal with before the openers in September. Fortunately, with Nick Chubb living up to the Heisman Trophy hype, any quarterback playing with him is guaranteed to look good. Not to mention, the Dawgs have other solid offensive pieces like A.J. Turman, Sony Michel and Keith Marshall alongside Chubb, which should help new offensive coordinator Brian Schottenheimer to get the team competitive.In the defense, Georgia is ranked amongst the league’s best pass rush in the nation under defensive coordinator Jeremy Pruitt. Nonetheless, the Bulldogs offense has lacked consistency in the past, forcing their solid defense to stretch beyond limits and giving up big plays.If Georgia can find some consistency on both sides of the ball, then well and good. Even so, it would be a bit too ambitious to hope that Georgia will be the team to fly the SEC banner nationally this season, considering it has been unable to handle its conference opponents lately.

Compared to their 2014 unit, the Ole Miss Rebels have a much stronger offense led by QB Chad Kelly. If he teams up well with leading rusher Jaylen Walton and Akeem Judd, the Rebels could give their SEC opponents nightmares especially because they already boast of one of the best defensive units in the country. Moreover, the return of receiver Laquon Treadwell and offensive tackle Laremy Tunsil from injuries should further boost the offense to great heights of success.As already mentioned, the Rebels have enough talents in the defense, though Robert Nkemdiche and his counterparts must be at their very best and maintain efficiency throughout the season, rather than falling apart when it counts most, like they did in their blowout 42-3 loss to the Frogs in the Peach Bowl.Due to a light out of conference schedule, Mississippi will most likely make it to the Bowl games once again. As for the national championship, it is tricky to pick on the Rebels, considering their offense has been out of sorts and they’ve been all but out of the national arena since becoming champions in 1962.

Missouri QB Maty Mauk has struggled with accuracy and turnovers issues in his previous two seasons. That said, his recent games with Missouri have seen the signal-caller post less mistakes with more sparks of brilliance. If he can push himself a little more, Mauk could be the best in the East again and hopefully lead the Tigers to a strong SEC run, possibly with contention for their first national championship crown. The fact that the Tigers’ offensive line boasts of the return of running back Russell Hansbrough could be a big boost to their ambitions.Having won back-to-back SEC East titles, the Tigers figure to be in the mix for both the divisional and conference title once again in 2015. Even so, the honest reality is that the Tigers are still miles away from legitimate National Championship ambitions.ConclusionOf the above teams, Alabama and Auburn have look most likely to hoist SEC’s flag in the national scene, with Georgia and Ole Miss as a distant wild-card options. However, with the explosive nature of offensive units like TCU and Ohio State, the SEC teams will need to get better in the offense and tighter in the defense to offer sufficient challenge. At the moment, though, it all looks like the SEC will have to wait one more year in order to get to the level of winning it all, so the SEC national championship drought will be continuing, at least for one more year.
Older post
Newer post