NCAA Football Betting News
Last year, the Alabama Crimson Tide were a strong unit in the SEC, but the expectation in the conference championship NCAAF betting odds was that other teams like Mississippi State, Ole Miss and Auburn would beat ‘Bama to the title. Everything actually looked to be on course for a title-less year for Alabama by October 2014, when the first College Football Playoff rankings were released looking like this: 1. Mississippi State 2. Florida State 3. Auburn 4. Ole Miss 5. Oregon 6. Alabama. However, by the end of the season, the SEC and national landscape changed and looked very different, with Alabama rising atop the conference and securing a slot in the inaugural four-team college football playoff as the top-seeded team in the nation. The rest of the so-called SEC football powerhouses could only settle for bowl games. And not that they did any good in those bowl games, as Ole Miss suffered a humiliating 42-3 loss to TCU in the Peach Bowl, Mississippi could not match Georgia Tech offense and lost the Orange Bowl 49-34, and Auburn lost to Wisconsin in the Outback Bowl despite the Badgers coming off a blanked out 59-0 loss to Ohio State in the Big Ten championship game. Of course, Alabama also didn’t do much with its No. 1 seed, getting annihilated by the Buckeyes in the playoffs. So in short, 2014 was a disappointing year for the SEC as a conference in the national platform. Nonetheless, at least Alabama can celebrate the fact that the team hoisted the SEC Conference title, when it didn’t look like they’d do so, as of October.

Only 57 Days until kickoff! Are you all ready? #Bama #CrimsonTide #RollTide pic.twitter.com/2bG7RYdDcD

Focusing ahead, the look of things in the 2015 college football odds indicate that Nick Saban and his team will be solid contenders for the Conference title once again in 2015, as has been the case in the recent years. But outside ‘Bama and the LSU Tigers, two of the most successful programs in the SEC conference over the last 10 years, there are other teams in the SEC that have been on the come-up, showing signs of being able to offer strong contention for the conference title. It is these other teams that we will be briefly focusing on in the section below.

Programs in the Alabama region (the Crimson Tide, Auburn Tigers and Georgia Bulldogs) have dominated competition in the conference, with 5 of the last 6 SEC Champions coming from the Alabama schools. With the Tide out of the picture (in this article), that leaves us with Auburn and Georgia as the top Alabama schools to focus on. Interestingly, the SEC sports information directors predicted that Auburn would be clinching the SEC West title and Georgia coming out on top in the SEC East in 2015. The Tigers are returning the fewest offensive starters in the SEC, but there’s still a lot of good going in their favor. For starters, there is the coach Gus Malzahn and his solid coaching acumen as a good offensive tactician. Even with the few returning starters, Malzahn should thus be able to lead Auburn to a good year, spearheaded by the team’s promising new QB Jeremy Johnson. Plus, Alabama, Mississippi State and Florida are all returning with fewer starters than Auburn, which should help in leveling the playing field for the Tigers. The Bulldogs were 10-3 (6-2 in SEC) in 2014, though the honest truth is that they should have done better, considering they lost to South Carolina and Florida, who were far from good teams in the conference last year. Those losses proved costly, as the Missouri Tigers went on to win the SEC East title and play (and lose) the Conference Championship game against Alabama. That notwithstanding, the Bulldogs are looking poised for a rebounding year, returning with 12 starters from 2014 (7 in the offense and 5 in the defense), including 2015 Heisman Trophy favorite RB Nick Chubb. Georgia also has a new offensive coordinator in Brian Schottenheimer, a renowned quarterback whisperer, who should be able to help the Dawgs solve their current woes in the quarterback department. 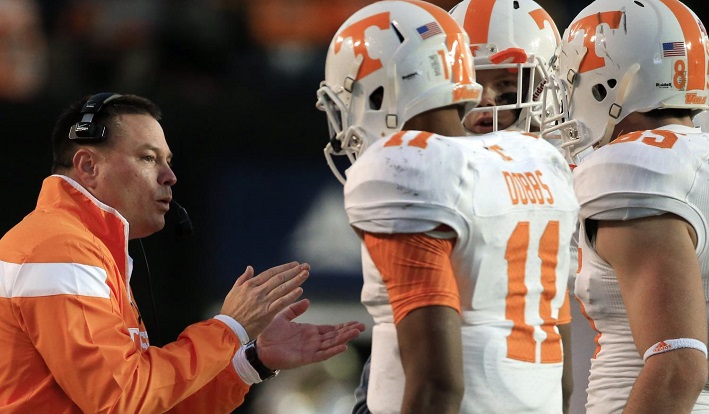 Coming off a strong finish to the 2014 season that saw them win four of the last five games, including an emphatic victory over Iowa in the Taxslayer Bowl, the Vols are arguably the strongest darkhorse team in the SEC this year. Yes, their 7-6 (3-5) mark from last season doesn’t encourage confidence. However, finishing with an average mark from the previous year is never a guarantee that one will finish poorly in the next season. After all, the Vols are returning with the highest number of starters in the SEC, led by one of the best QBs in the conference in Joshua Dodds. Added to the inspirational coaching of coach Butch Jones, Tennessee will probably be Georgia’s biggest threat in the SEC East, and if the Bulldogs slip like they did in 2014, then the divisional crown could easily go to the extremely talented Volunteers.

Other Noteworthy Teams in the SEC

Missouri Tigers: After winning back-to-back SEC East titles in the last two years, including a remarkable 11-3 (7-1) mark in 2014, it would be unfair to sleep on the Tigers and their tactful coach, Gary Pinkel. Moreover, the Tigers have their strong QB-RB combo in Maty Mauk and Russell Hansbrough, who are returning from last year’s good offensive unit. Unfortunately, the Tigers suffered massive losses in the offseason, with a total of 23 players from last year’s roster not returning in 2015. The losses, more so at the receiving department and the D-line, are likely to cost the team. Not to mention, the Tigers no longer have the services of their stellar defensive coordinator, Dave Steckel, which further affect their defense. So although Mizzou should still be a good team, it is hard to see them winning the SEC East division for the third year in a row. Arkansas Razorbacks: the Razorbacks finished the 2014 season as one of the hottest SEC teams, something that is likely to motivate them for a strong start this year. Improving their win record by a win or two should be possible for them in the West. Even so, the Razorbacks can only go as far as quarterback Brandon Allen can take them, and going by his good-not-great skills, Arkansas will probably just be good enough for a third finish in the West. 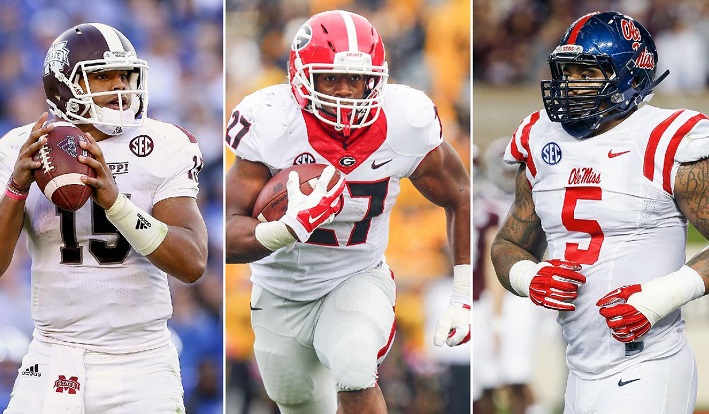 The Mississippi Teams: If only we could combine Ole Miss and Mississippi State to make up one team, then we’d have an outright SEC winner right here. Ole Miss brags of having one of the meanest defensive units in the country, led by Robert Nkemdiche, but their offense is simply below average, with WR Laquon Treadwell being the only noteworthy star in the O-line. For Mississippi State, the opposite is true, as the Bulldogs have a solid offensive unit, led by the explosive combination of Dak Prescott and D’Runnya Wilson, but their defense is sorely lacking in talent and depth. The two Mississippi teams are thus likely to have up-and-down performances, probably like 2014, finishing with more-or-less the same marks like last year. Florida Gators: No doubt, the Florida roster is spewing enormous talent in the D-line, but new head coach Jim McElwain has tons of issues to address up front, including a lack in QB play that hamstrung the Gators’ campaign in 2014. Signs of McElwain’s rebuilding agenda should thus be evident, but I wouldn’t go as far as hoping for a title challenge by the Gators in the division or even conference. Concluding Remarks As was the case in 2014, the biggest concern for most SEC teams will be on the offensive side of things. This will be particularly pronounced in QB play, as only one of the six starting SEC quarterbacks in 2014 that finished the season with a passer rating in the Top 50 in the FBS will be returning in 2015. That one returning quarterback is Prescott (Mississippi State), with the remaining five QBs (Ole Miss’ Bo Wallace, Auburn’s Nick Marshall, Alabama’s Blake Sims, South Carolina’s Dylan Thompson and Georgia’s Huston Mason) having graduated or moved on to the NFL. Finding a way to solve this offensive lack will be important, or we will be witnessing lackluster in-conference games. In fact, at worst, we could end up witnessing another poor representation by SEC in the national arena, as has been the case in the last two years when SEC has gone 0-5 in BCS/College Football Playoff games. Sources: ESPN.go.com (http://espn.go.com/college-football/player/_/id/3128720/nick-chubb) FOXSports.com (http://www.foxsports.com/college-football/dak-prescott-player)
Older post
Newer post