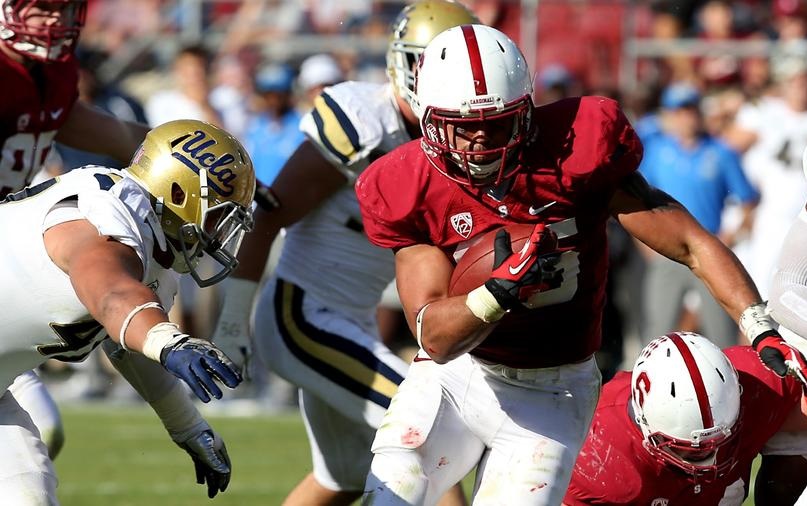 NCAA Football Betting News
Half of the Pac-12 Championship Game has been set, as the Oregon Ducks have already punched their ticket in the North Division. The South is still up for grabs, though, and it is the UCLA Bruins who control their own destiny. A win against Stanford in the Rose Bowl this weekend puts them in, but a loss will open the door for either Arizona or Arizona State, who will go head to head on Friday. Here are the match analysis and College Football Betting odds for this game.

How To Bet The Bruins vs. Cardinal NCAA Football Odds & Game Info

Why Bet on the UCLA Bruins

UCLA are sure to be coming into this one on a real high, having won 5 straight, including a pretty solid beating of their state rivals, the USC Trojans, last weekend. The Bruins have been playing very well on both sides of the ball during this winning stretch, but their offense has been especially impressive. They have been mixing things up, showing teams that they can beat them on the ground or in the air. One area of weakness may well be the run defense, which has been horribly inconsistent for the UCLA Bruins. If the Cardinal are to get anything out of this one, that is where it is most likely to come.

Why Bet on the Stanford Cardinal

The 6-5 record that Stanford bring into this one is pretty much indicative of their season. They have been incredibly inconsistent all year, looking great one week and then stinking the joint out the following week. They have lost 3 of their last 5, but are coming off a very good win over California. That came in the heels of a thumping by Utah in a game in which they were favored by 10. It is almost impossible to predict which Cardinal team will show up, but it had better be the good one if they don’t want to get mauled by the Bruins.

The bookies see UCLA as a 4.5-point home favorite for this one, in spite of the fact that they are 2-3 ATS at home this year. The Bruins have not done a very good job ATS all season, posting a 4-7 mark, which includes being 4-6 as the favorite. Stanford aren’t really much better, going 5-6 ATS this season, and 1-4 ATS on the road. All of that said, Stanford has had the number of UCLA as of late, going 3-0 SU and 2-1 ATS over the past three seasons.This is not the same Stanford team of the past few years, though, and they are going to be in tough against a Bruins team with everything to play for. The chance to head to a Championship Game should serve as fuel for the Bruins fire, which is why I like them -4.5.
Older post
Newer post