NCAA Football Betting News
Heading into the 2015 season, there appears to be some positive momentum for the Tennessee Volunteers in their quest to rediscover the good form in 2000s that made them a dominant force in the SEC East division. The positivity is not just limited to the Tennessee fans and players, but it is also evidenced in the 2015 NCAAF betting odds, where the Vols are placed as one of the top challengers for Georgia in the East.The pundits have not been left out of the optimistic talks, with ESPN’s Joe Shad saying, “I totally understand why a lot of people are actually picking Tennessee to win the SEC East. I think they’ll contend (strongly) in the SEC East.”Is it all hot air about the Vols and the upbeat expectations about them ahead of the new season, or is there some true value bettors can get by riding on them in the NCAA Football lines? Read on as we break it all down for you below.

The biggest factor that will be working in Tennessee is the fact that the Volunteers will be returning with 18 starters from their serviceable 2014 team that went 7-6 (3-5). With more experience and better familiarity among the teammates, the Vols should be able to play much better than they did last year.The returning starters are good value players on both sides of the field, something that is guaranteed to offer them balance in 2015. Some of the notable stars in the team include QB Joshua Dodds, who is valued as one of best QBs in the SEC, an enviable speedster in Jalen Hurd and a talented DL in Derek Barnet (one of the best linemen in the nation), and solid corner in CB Cam Sutton, who is likely to be in the mix for first-team All-SEC honors.

Entering his third season, coach Butch Jones continued to impress his employers at the Rocky Top by getting well-talented recruits, including freshmen DT Kahlil McKenzie and DE Kyle Phillips, who will add some much-needed boost to the team’s D-line. After improving by two wins from 2013 to 2014 with a very young group, the additional talent, combined with the already-good group of returning players, should help the Vols bump up their wins once again.

After starting their season rather tamely, probably due to acclimatization into the new environment and a gel-up among the starters, the Vols found their rhythm and finished the season strongly, going 4-1 SU in their last five games. Their capacity to go it hard against big teams was showcased in the end-of-year Taxslayer Bowl, where they routed Iowa 45-28. 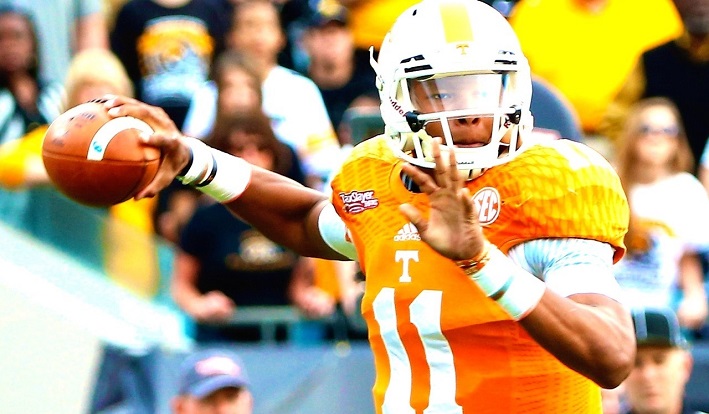 Room for Error in the SEC East

The Missouri Tigers (11-3, 7-1 in SEC) and the Georgia Bulldogs (10-3, 6-2 in SEC) were the best two teams in the SEC East division last year. However, both teams were far from perfect, often showing weakness against “average” or poor teams. The Bulldogs, for example, lost games to the Gamecocks and Gators, teams that had major issues in 2014 and struggled nearly throughout the season. Meanwhile, Mizzou lost over 20 players from last year’s unit, which means there is going to be some gap in talent in the team—a factor that could cause them to struggle in 2015. Considering such factors, the Vols will have some wiggle room in the division, as they could as well lose one or two games and still have a record that is good enough to help them claim the SEC East title.

Final Remarks and 2015 Prediction on the Vols

In the past, the Vols have been expected to perform and ended up disappointing a number of times, so bettors should have cautious optimism when banking on them in 2015. That said, with the elevated talent level in Knoxville, things are looking real good for Jones’ boys to take over the division and possibly the conference. A good season can thus be expected from them, with at least 9 wins to their name in 2015.Sources:ESPN.go.com (http://espn.go.com/college-football/player/_/id/546544/cameron-sutton)Wikipedia.org (https://en.wikipedia.org/wiki/Missouri_Tigers)
Older post
Newer post