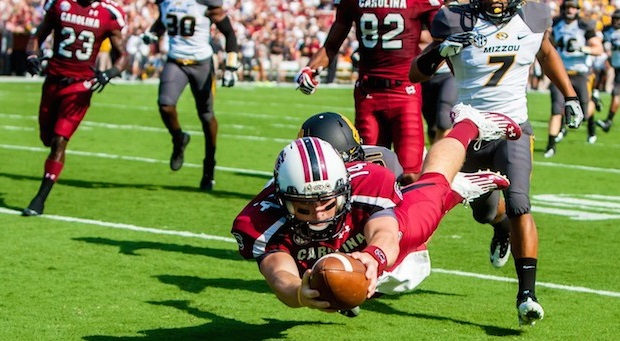 NCAA Football Betting News
The South Carolina Gamecocks and the Missouri Tigers face off on Saturday in Columbia in an intense SEC matchup that will surely catch the attention of many college football betting fans. After a 3-0 start to the season, the 18th ranked Missouri Tigers loss their first game of the season to an unranked Indiana team, costing them their privileged position in the AP Top 25.South Carolina was ranked #9 to start the season, but they were embarrassed by #21, Texas A&M, and fell out of the top 10. The team has rebounded well from that loss, and has won their last three games, which included a win over the 6th ranked Georgia Bulldogs two weeks ago.

The Tigers are 2-2 ATS this year, and are going to be facing their first ranked team on Saturday, which will be followed by a home game against Georgia, making this an important game for them if they want to win the SEC East.The Gamecocks are 1-3 ATS, they were written off after their debacle against Texas A&M, but have managed to play well enough to win three straight games. They are still not playing as well as their coach would like, but as long as they are winning games, he can’t complain too much.These two teams have played each other four times, three of those games in recent years. The Gamecocks won a 27-24 game in Columbia, Missouri last season, when the Tigers were ranked #5, the loss ended Missouri’s seven game winning streak, and their chances of playing in the SEC Championship game.Their last visit to Columbia, South Carolina ended in a 31-10 victory for the Gamecocks, which is the largest margin of victory for either team in the series.Game Odds:MISSOURI: +5-110SOUTH CAROLINA: -5-110

South Carolina is favored to win this game, and is more than likely going to win it because they play very well at home, and have defeated the Tigers in two of their last three meetings. The fact that they are 1-3 ATS this season, and have one of the worst defenses they have had since Steve Spurrier became the head coach makes me believe they will win but won’t cover the existing college football spread.
Older post
Newer post