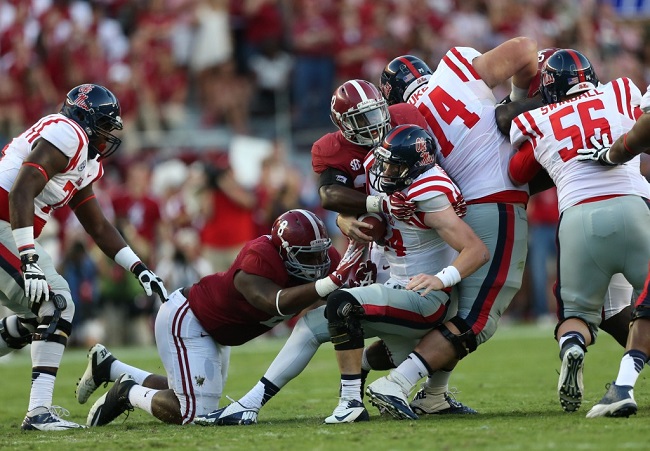 NCAA Football Betting News
October is going to be a huge month for college football betting. After five while weeks, teams are about to enter a win or die month preceding the first ever college football playoffs. A loss in the coming weeks could potentially end a team’s aspirations to get to the postseason.Early college football predictions can become useless after this month. However, this is a great thing. Many the matchups coming in the next weeks will be very exciting and will show the “true colors” of each of these teams.There are a ton of huge games that matter in October. Some of these games could determine whether these schools make the top 4. Other games in which the teams are evenly matched can set the tempo for the whole rest of the season. So lets check the top games entering Week 6.

Saturday, October 4, 12:00 PM, Davis Wade Stadium at Scott Field, Starkville, MississippiOur favorite game of the week is a SEC battle between the No.6 ranked Texas A&M and the No. 14 Mississippi State. The Aggies are coming from a close 28-35 win over the Arkansas Razorbacks that almost snapped their perfect record, and now will face another undefeated and dominant team: the 4-0 Mississippi State Bulldogs. The Aggies are 5-0 with a 2-0 record in the SEC while the Bulldogs are 4-0 and 1-0 in conference play following a 34-29 win over LSU in Baton Rouge.Teams are very well-matched and highly motivated to win this game, so expect a ferocious contest that will likely roll out as a very close game.Game Odds:TEXAS A&M: +1½-110MISSISSIPPI STATE:            -1½-110

Saturday, October 4, 3:30 PM, Vaught-Hemingway Stadium, Oxford, MississippiThe SEC action continues with an intense match featuring the Alabama Crimson Tide and the Ole Miss Rebels. Both teams need this win in order to rank well and keep the momentum going. Alabama has developed into one of the most complete football teams in the nation and will do whatever it takes to maintain this status against the Rebels. Ole Miss, on the other hand, need the victory to enter the Top 10 and snap a ten game skid against the Crimson Tide. Only one team move to 5-0, so this is likely to be an emotional, dramatic, action-packed game – just the way we like it.Game Odds:ALABAMA: -6½-110MISSISSIPPI: +6½-110

Arizona Wildcats at No. 2 Oregon Ducks

Thursday, October 2, 10:30 PM, Autzen Stadium, Eugene, OregonPerhaps you may think that the game between the Wildcats and Ducks will be an easy test for the No. 2 ranked Oregon State, but for both teams, the match is more meaningful than that. The Ducks (4-0) will have revenge on their minds when the Wildcats (4-0) come storming into Autzen Stadium on Thursday night. Last season in Tuscon the Wildcats beat the Ducks 42-16 and destroyed all hopes of reaching a fifth consecutive BCS game and winning the Pac-12 conference title.Despite the large spread on Oregon, this is a must win game for Ducks as they are entering a tough stretch of their schedule, with a trip to UCLA right after this game. So the Ducks must step up and make a statement as the team to beat in the PAC-12 conference.Game Odds:ARIZONA     +23-110OREGON       -23-110These are just three of many games that we will witness this upcoming week. It may be fairly early in the season, but this is the month where things really start to heat up. This is the month where the stage is set for the entire rest of the season, so keep an eye fixed on the coming odds and lines for college football.
Older post
Newer post