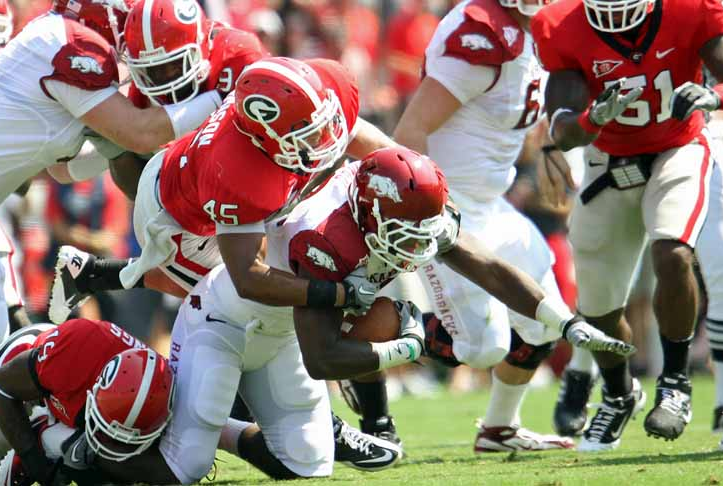 NCAA Football Betting News
In what is bound to be one of the most historic weeks of the NCAAF season, the Mississippi State Bulldogs dethroned the FSU Seminoles and are now the No. 1 team in this Week’ AP top-25 poll, following their great exploits in Week 7. And if you think rising to the top of the Poll was an easy feat for the Bulldogs, then maybe you need to readjust your thinking cap. Prior to this season, the Bulldogs had never ranked better than No. 7, so climbing to the top is really a big deal. Jumping to the No.1 spot in the national rankings will also improve their college football betting odds for the coming weeks, starting with the game against the Kentucky Wildcats on Oct. 25th.Not very far from Bulldogs’ backyard, another team, the Ole Miss Rebels, is enjoying every bit of their new-earned No. 3 celebrity status. The Rebels, before this season, had never ranked in the top five of the polls since 1964.As we enter Week 8, there is certainly going to be a lot at stake for many teams and bettors, for that matter. So far, six teams are undefeated (Baylor, Marshall, Florida State, Mississippi State, Ole Miss and Notre Dame), Florida State has been dethroned from the No. 1 spot after staying atop for nearly a year (since Dec. 1, 2003 amidst a brief cameo by Alabama in Week 6 of the Coaches Poll), Mississippi State is the first team to go from unranked to No.1 in five weeks, and both Baylor and Ole Miss are almost guaranteed of two playoff spots in the Coaches and AP Polls. Below are the best six games you should watch for, as we enter Week 8.

A 31-7 mauling of the 4-2 California Golden Bears (3rd in the North Division) means that they need to go back to the drawing board and prepare much better for the 4-2 UCLA Bruins (5th in the South Division). With California enjoying a 6-4 head-to-head record against UCLA yet the Bruins won the last fixture in October 2013 (outscoring the Bears 37-10), the game will be highly competitive. A California win looks more likely.Game Odds:UCLA: -7-110CALIFORNIA: +7-110

Despite their 5-2 record, Texas A&M will rue last week’s 35-20 loss to Ole Miss as they prepare to meet their division rivals, the Alabama Crimson Tide. Texas A&M will definitely give a good account of themselves, but the Tide is the clear favorite to win this duel, listed at -11-points.Game Odds:TEXAS A&M: +11½-110ALABAMA: -11½-110

Had they played against a better opponent, the dismal play by Oklahoma last week should have seen them beaten. Fortunately for Oklahoma, the Texas Longhorns were way more lackluster than the Sooners, hence losing 31-26. When the 5-1 (4th in Big 12) Sooners meet the 4-1 (3rd in Big 12) Kansas State Wildcats, it will be all-guns-blazing as better placement in the Big 12 is in contention. Oklahoma is more likely to get a win in this match.Game Odds:KANSAS STATE: TBAOKLAHOMA: TBA

When these two neighbors meet, there is usually everything but a neighborly confrontation between them. The 5-1 Washington Huskies sit 4th in the North Division following their 31-7 win over the California Golden Bears. Meanwhile, the Oregon Ducks are equally strong with a 5-1 start and are 1st in the PAC-12 Division and No.9 in the nation after beating the UCLA Bruins 42-30. With their new ranking at No. 9, the Ducks look most likely to beat the Huskies, though the 21-point spread makes the Huskies an attractive pick for Week 8.Game Odds:WASHINGTON: +21-110OREGON: -21-110

With both Notre Dame and Florida State being unbeaten this season, it unavoidably looks like we are guaranteed to have one less undefeated team in College Football. The fighting Irish’s rather unconvincing win last week means that they have to solve their defensive issues before they meet. If not, it will be another easy victory for the Seminoles who are looking to reclaim their No.1 position in the country.Game Odds:NOTRE DAME: TBAFLORIDA STATE: TBA

After their narrow loss to Alabama over the weekend, the 3-3 Arkansas Razorbacks will be hoping for a bounce back in this week’s fixture against the 5-1 Georgia Bulldogs (1st in the SEC East Division). Going by their recent form, including the recent 34-0 hammering of the Missouri Tigers, the Bulldogs are heavy favorites to bag another win this Saturday.Game Odds:GEORGIA: -3½-110ARKANSAS: +3½-110As a crucial note, the rankings are certainly important to get an idea of what teams stand the best football game odds, but are not all that needs to be considered in this week’s games. The fact that a previously unranked team like Mississippi State was able to rise to the top is a living proof that anything can happen in the next few weeks.
Older post
Newer post