NCAA Football Betting News
The Cougars might have been an average team last year, but they definitely had sparks that demonstrated a team underlying with potential. The presence of a number of great players such as QB Taysom Hill ensured they had a great run of results, especially in the beginning of the college football betting season. The day they lost their first match of the season, they were without Hill, clearly showing that the QB was (and still is) a crucial asset for the Cougars. Hill’s injury was felt so much in the team that they finished the season 8-5, bringing a disappointing end to a season that initially bared a lot of promise. True to the running theme of disappointment, they were invited to the inaugural Miami Beach Bowl but lost to Memphis 55–48. 2014 seemed to have been a déjà vu of 2013, in which they had the same record and losing to Washington in the Fight Hunger Bowl.All that notwithstanding, 2014 also saw Hill shine brightly enough, earning a number of personal awards in his ever-budding career. In essence, that’s the reason this article is dedicated on Hill and the impact he is likely to have in this season’s NCAAF odds.

Hill’s sporting passion can be traced back to his high school days when he played for Highland High School. He took part in football, basketball and track athletics. In football, his senior record stands at 2,269 passing yards and 18 touchdowns, plus 1,491 yards rushing and 24 additional touchdowns on the ground. That year, he ended the season with four player-of-the-year awards: All-Region, All-Conference, All-Idaho and Gatorade High School Player of the year. To date, no one has broken his single-season and career records for total offenses.

The QB’s freshman year in 2012 began on a low and ended on a low, as he started the season as a number two quarterback, mainly because he was recruited for special situations that needed someone that can dash in short yardages. He appeared in six games that season, starting just two, but winning both. His major highlight for the season was an FBS Independent Offensive Player of the Week display against Hawaii. The season was cut short for him when he suffered a knee injury.Things brightened up for the 24-year-old in 2013 as he came into the season as the starting quarterback. The season started on a dimmed note, with BYU losing its first match at Virginia, 19-16. However, the following week, he helped the team orchestrate a bounce back against the Texas Longhorns. He had a standout performance in that game, rushing for 259 yards and 3 touchdowns in a 40-21 win. The performance earned him the FBS Independent Offensive Player of the Week Award, his second in two seasons. Additionally, he was also voted the CBSSports.com National Player of the Week and the Athlon Sports National Player of the Week for the great display against the Longhorns. The season went on to become a stepping stone to his heralded status as a mainstay QB in college football. 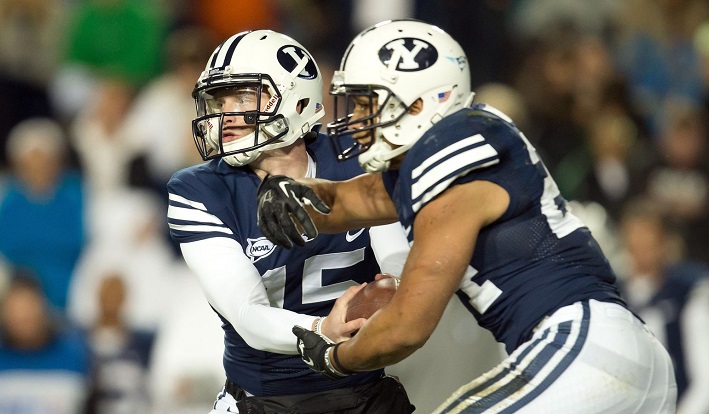 The only thing that seems to be standing between the Idaho native and sustained success is the injury bug. The 2014 season, for example, saw him fracture his leg against Utah State on October 3rd, 2014, bringing an end to what may have been a great season for him. Reportedly, he seems to have shaken the bad knee injury from last year and is ready to make his mark. In fact, Taysom Hill admitted that he is coming back healthy and hungry for their first match against the Huskers, knowing that his time in college is soon coming to an end. And with a career in which he has suffered on the bench for the better parts, he is surely thinking about making the most of 2015. The boisterous QB believes BYU can reach the peak and win everything and is ambitious about winning the National Championship. In a recent top 10 best Heisman Trophy values by Feldman, Hill was ranked second with 50-1 odds. His coach terms him as the fastest and toughest man in the team.If the ranking by Feldman is something to go by, then we are in for a great season from Hill. Of course, in order for that to happen, our fingers must be crossed that we do not see another season where a great talent such as Hill ends up sitting on the bench due to an injury. Will he win the Heisman this year? Probably Not! But can he steer BYU to a Conference title and other successes? Absolutely Yes!Sources:wikipedia.org (https://en.wikipedia.org/wiki/Texas_Longhorns_football)ESPN.go.com (http://espn.go.com/college-football/player/_/id/482594/taysom-hill)
Older post
Newer post