NCAA Football Betting News
As the 2015 NCAA football betting season approaches, football pundits are doing all they can to give the fans a brief overview of what they should expect from their respective teams before the campaigns kickoff. Offseason activities are countless varying on how teams handle personnel or scheme changes and which players are ready to emerge in 2015. This is the time when each team conducts an overhaul in their areas of weaknesses.Before the unpredictable madness starts in the new season, here is a recapitulative look at the storylines that have dominated the college football news and headlines in the offseason: 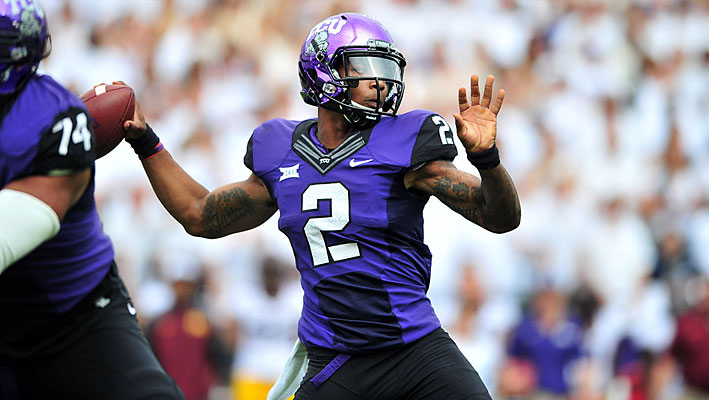 One of the hottest arguments every offseason surrounds the four teams that could possibly make the playoffs. Last year, there were controversies surrounding the entire selection process, as both Baylor and TCU claimed a piece of the Big 12 Championship, while Ohio State also had a solid case for the last spot, going by its strong one-loss record. In the end, the Bucks went through at the infuriated expense of TCU and Baylor.

#Big12FB: @TCUFootball‘s Trevone Boykin is picked as the preseason Offensive Player of the Year. pic.twitter.com/EwHOZYWCKX

Given that there will be no Big 12 Championship game this season, as was the case last year, it will be interesting to see how the selection committee handles the situation in case we have a similar situation like in 2014. A lot of discussions have been made to this effect, with the talks about other top national contenders like Alabama, Clemson, Florida State, Georgia and Oregon also being dragged into the conversations.

The Return of Jim Harbaugh to Michigan 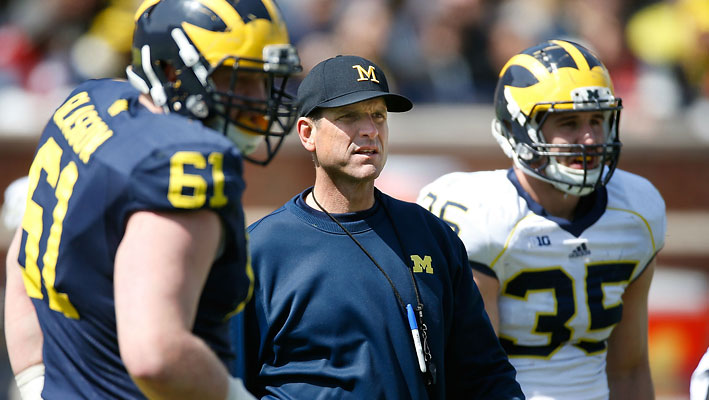 Despite a rich school history, Michigan has been very disappointing in the recent past, going 46-42 under head coaches Rich Rodriguez and Brady Hawk since Lloyd Carr retired from the club in 2007. Things could however be changing better in 2015, thanks to Harbaugh’s return to his Alma Mater. Having played as a QB for Michigan from 1983 to 1986, Harbaugh now returns to the Wolverines as a head coach, with many hoping that he will use his strong history of restoring football programs to reinvent Michigan.During his tenure at Stanford in 2007, he went 4-8 in his first season, but he led the program to a 12-1 record four years later, including a victory in the Orange Bowl. In 2011, Harbaugh took charge of the embattled San Francisco 49ers and led them to a 13-3 record and a berth in the NFC Championship in his first year with the club. One season later, he led San Fransisco to the Super Bowl for the first time in 18 years for the franchise. With such records preceding his larger-than-life reputation, it would not be a big surprise if the invigorated talks about a resuscitated Michigan come true, as it did with his previous two teams.

The problem the defending national champions are facing is one that most teams would wish they had. They have three QBs who have proven they can help Ohio State win games and challenge for championship titles. After missing out of the 2014 season with a shoulder injury, Braxton Miller will be fit again to feature for the Buckeyes. He was largely viewed as one of the favorites to with the Heisman award before his preseason injury. 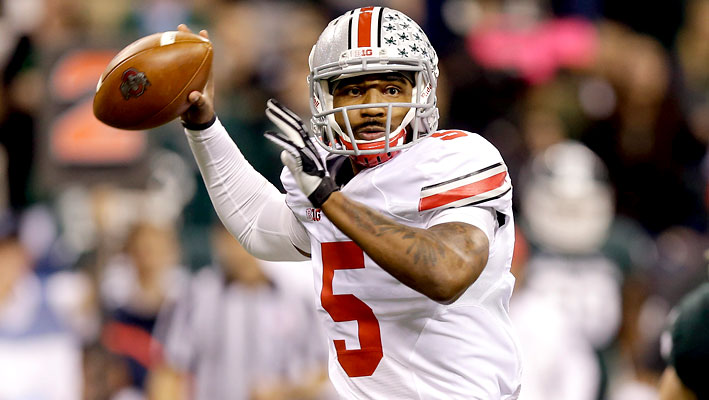 But with the injury, JT Barrett replaced him as the regular starter and led the team to an 11-1 record and a berth in the Big Ten Championship game. Barrett also featured as a potential Heisman candidate during the season. Unfortunately, he suffered an ankle injury against Michigan in the final game of regular season, forcing the Buckeyes to push their third-string QB Cardale Jones into a starting role.Jones, unknown and inexperienced at the time, owned up to the responsibilities given to him, having a wildly successful time than most people imagined. His first assignment against Wisconsin in the Big Ten Championship ended in 59-0 blowout. He thereafter led the Buckeyes to upset the betting favorites Alabama in the Sugar Bowl. His trio of wins culminated with a win over the Oregon Ducks in National Championship game.Urban Meyer, the Ohio State head coach, will thus have a tough job on deciding the player to start the first game of the season and thereafter come 3rd September lead the team throughout the season. His head-scratching “tri-lemma” has been the subject of heated discussions. It remains to be seen what becomes of the situation, but whatever happens, no doubt the Bucks will be in safe hands because all the three QBs are vastly talented in their own merits. 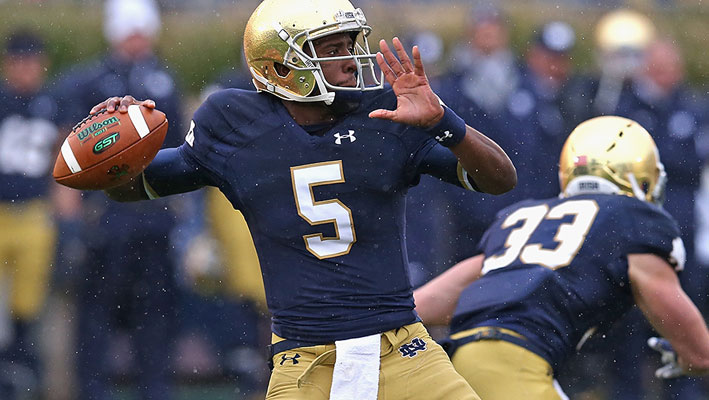 During his first college football career at Notre Dame in 2012, Golson led the team to a 12-0 regular season record and a berth in the BCS National Championship Game against Alabama. After that successful spell, the quarterback was suspended from Notre Dame for academic reasons and missed out on the 2013 season. Golson re-enrolled at Notre Dame and recorded over 3,000 yards with 29 TDs in 2014. However, with his numbers dipping towards the end of the season, Golson faced a lot of criticism, with his back-up Malik Zaire looking more likely to take up a starting role after impressing in the regular-season finale and bowl start.With Golson worried whether he would about maintain his spot as a starter for the program, he opted to transfer to Florida State, a place where a starting job was more viable. Certainly, Golson will have his work cut out for him, seeking to fill the huge gap left by 2013 Heisman Trophy winner Jameis Winston. Currently a rookie in the NFL, Winston had a stunning 26-1 record as starter over his two seasons and led the Seminoles to the 2013 National Championship plus a berth in the inaugural college football playoff. Can Golson live up to the high standards set by his predecessor? Only one way to find out… Keep tabs with us in our college football previews.SourcesWikipedia.org (https://en.wikipedia.org/wiki/Rich_Rodriguez)Yahoo.com (http://sports.yahoo.com/indiana/football/recruiting/player-Malik-Zaire-132420)
Older post
Newer post