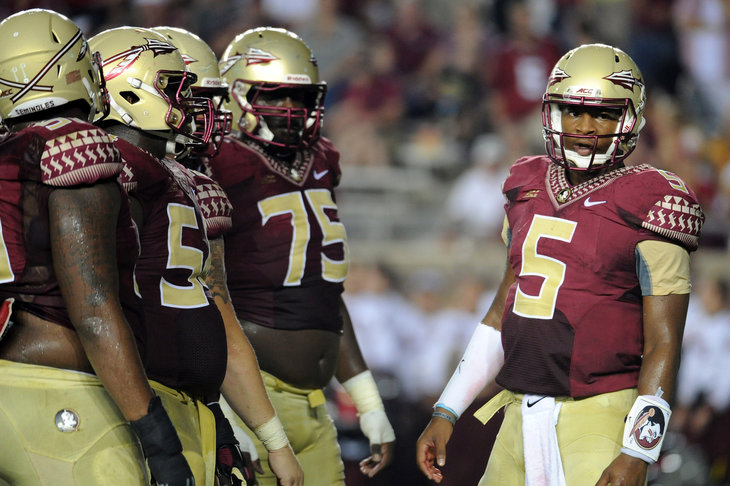 NCAA Football Betting News
Week 4 of the college football season kicked off on Thursday night with an anticipated 20-14 win by Auburn over the Kansas State Cougars. Week 4 resumes tomorrow when the remaining teams meet for an action packed weekend,  which means that it’s time to check some of the available college football betting trends and other info for those looking to bet a buck or two.

One of the best looking bets for week 4 is Texas A&M, who just happen to be a one of the favorite teams for bettors looking for some action against the spread. They will enter their game vs. the SMU Mustangs as 31-point favorite.

The BYU Cougars opened the season with a 35-10 win over Connecticut. After beating Texas a couple weeks ago, the Cougars put together another win against Houston to move to 3-0, so the -14½ spread against the Virginia cavaliers should be no problem.

There is only one other game this weekend where ranked teams ho head to head. The top-ranked Florida State Seminoles welcome Clemson (#22) and are 19.5 favorites over the Tigers. The Seminoles are on a hot win streak, going 18-0 straight up in their last 18 games. That said, they are on an 0-3 slide against the spread after coming off a 6-0 streak ATS. Furthermore, the total score has been UNDER in 5 of their last 6 contests. One thing to consider here is that Seminoles QB Jameis Winston will be benched for the first half of this game after making lewd comments on campus. This was seen as a potential issue for the Seminoles, but so far they continue as -14.5 point favorite to win this match.

Number 2 Oregon go on the road to the Washington State Cougars, with the odds line putting the Ducks as a 24-point favorite. The Cougars are 4-0 ATS in their last 4 meetings with the Ducks, despite losing all 4 of those games. The OVER had prevailed on all 4 of the Cougars previous home games.

It’s a tale of two spreads when #3 Alabama welcomes in the Florida Gators this weekend. The Crimson Tide are 14.5-point favorites, yet have gone 0-5 ATS in the last 5 games they have been favored. That said, they are a perfect 5-0 ATS when playing SEC opposition at home. Which of those streaks gets busted will be decided this weekend.

The Oklahoma Sooners (#4) look to have a tough one, as they are an 11.5-point favorite on the road at the West Virginia Mountaineers. Alabama have already seen just how tough this West Virginia team is, scraping out a 33-23 win in spite of being 22-point favorites. The Mountaineers are a perfect 3-0 against the spread this season, while Oklahoma is 7-3 ATS in its last 10 road games, posting a 9-1 SU record during that period.
Older post
Newer post