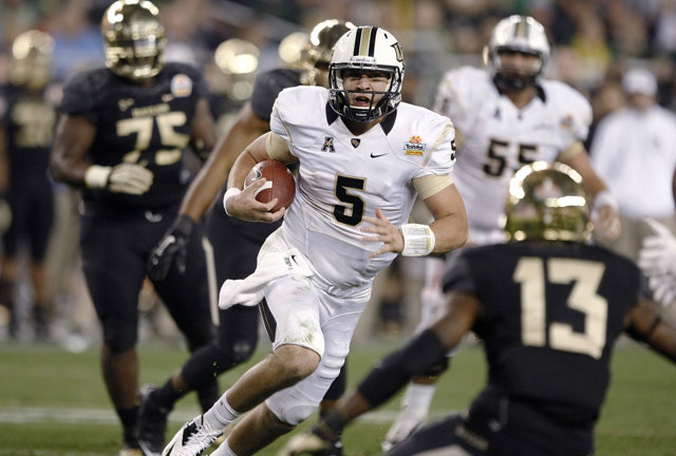 NCAA Football Betting News
This week’s college football schedule sees three games on tap on Thursday night, all of which are interesting in their own right and offer bettors some great lines on college football. The one game that stand out among the rest, though, sees university of Central Florida take their 1-2 record on the road to face the Houston Cougars (2-2)

The Knights had an awful season start, but UCF finally got their first win of the season in a 41-7 dismantling of Bethany Cook. This came after a pair of losses to open the college football season, including a 24-26 heartbreaking loss to Penn State at home. Their second loss was on the road to Missouri, where 4 turnovers ended up being very costly indeed. Last week’s win is sure to have installed a little more confidence in a team that looked to be lacking it somewhat after that poor start. They are 1-2 against the spread so far, and are 1-1 in the OVER/UNDER department.The one thing that has been missing from Houston’s game so far this season is consistency. They are on a lose one, win one streak that they will only be able to halt with a win against UCF. They started out the season with a 7-27 loss to UTSA, followed by a crushing 47-0 win over Grambling. Next up was a loss to BYU, followed by a good win over UNLV. Turnovers have been a major factor in all 4 of their games, with both wins coming on the occasions when they had more takeaways than turnovers. Houston are 2-2 ATS, with 3 games going UNDER the point’s total.

Houston comes into this one as 3-point home favorites, with the point’s total set at 50 points (although the game total may change in the coming days). These two teams have only met once in the past 3 seasons, with UCF winning straight up. Houston covered the spread in that game and the total went UNDER. Going back to 1992, UCF is 4-1 SU and 3-2 ATS, with 4 of the 5 games going OVER the total.Game Odds:CENTRAL FLORIDA: +3-110HOUSTON: -3-110Of the combined 7 games that these two teams have played so far this season, only 1 has not had a turnover. The remaining six games have had a combined total of 32 turnovers, so expect that to be a factor in this one.

As mentioned earlier, the biggest problem that Houston has had all year is consistency, although both of their wins have come at home. Their offensive turnovers have been a real issue, though, and that is where UCF needs to come out on top if they are to win. Central Florida could spring the mild upset here, with the football betting total points likely to fall UNDER the 50.
Older post
Newer post