NCAA Football Betting News
Often this early in the season, NCAAF betting enthusiasts will hear many things about how solid the defending national champion Ohio State is, what a cutthroat the Alabama Crimson Tide and the SEC will be in the race to the playoffs, and whether or not Baylor or TCU have what it takes to push for playoff contention. And while most of these discussions are all well-founded, the reality is that the FBS runs 128 teams deep and several a good number of programs (particularly those already in the Top 25) are capable of surprisingly swinging their way into the playoff banter.

In a tribute to these teams that are capable of crashing into the playoff picture, we present to you the UCLA Bruins (2-0, 10th in the AP Top 25), a team that has so far been overlooked from the talks about the odds for 2016 college football playoffs, but is well-capable of sneaking its way into solid contention for the Final Four, based on the following reasons.

After sitting in the shadows of teams like USC, Arizona and Oregon in the Pac-12 South, and winning just three bowl games from 1998 to 2012, the Bruins have been a markedly different team over the last two years, thanks to the mercurial head-coaching of Jim Mora. 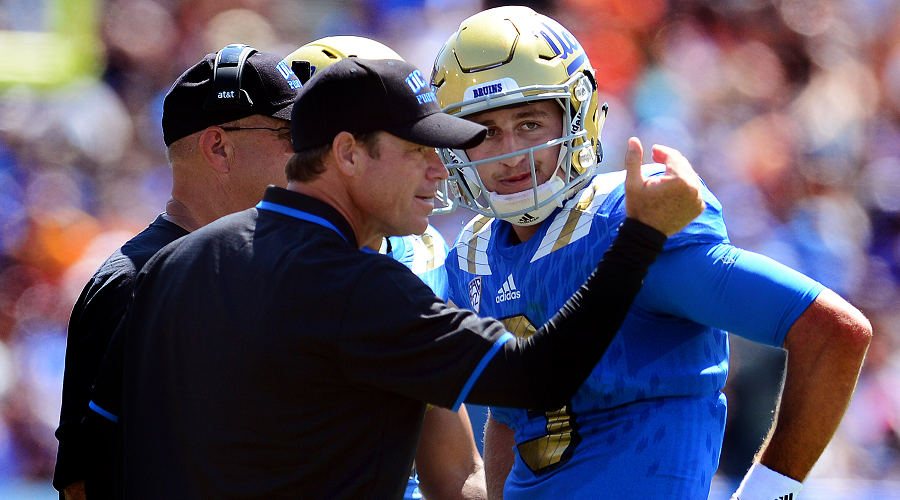 In his three years in charge of the Bruins, Mora has led the team to two 10-win seasons, two bowl wins, and back-to-back top-20 finishes in the AP end-of-season rankings. With such a strong record of continued success, improving to higher heights should certainly be within the realms of strong possibility.

Unlike most ranked teams in the Pac-12 that have a tough schedule in their bid for the playoffs, the Bruins are blessed of a favorable schedule, including challenging-but-beatable teams like Washington State, BYU, Colorado and the duo of Virginia and UNLV (whom they took care of in Week 1 and 2). After beating Virginia 34-16 at home in Week 1, the Bruins had a masterclass performance in Week 2, bludgeoning UNLV 37-3 on the road. 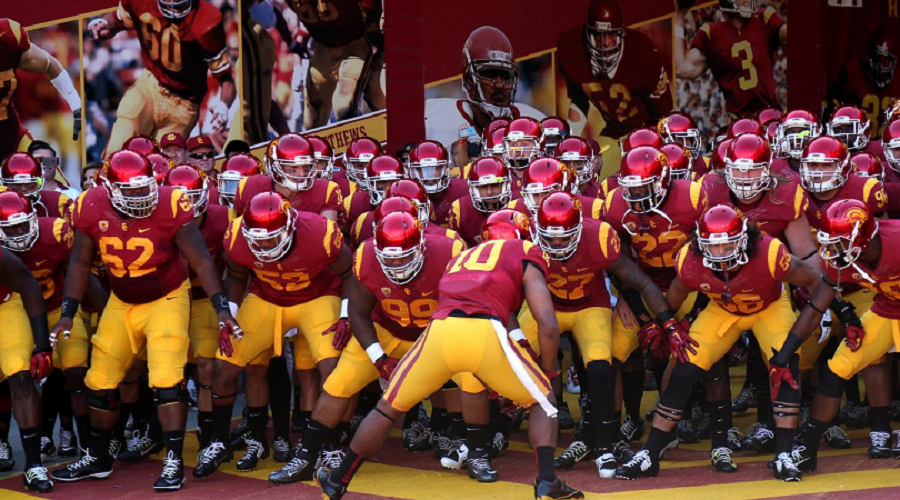 Just about the only tough games in their regular-season slate are the matchups against Stanford, Arizona, Utah and USC. And going by Stanford’s surprise 16-6 loss to Northwestern in Week 1, it doesn’t look like UCLA will have that many problems, if any, against the Cardinals. 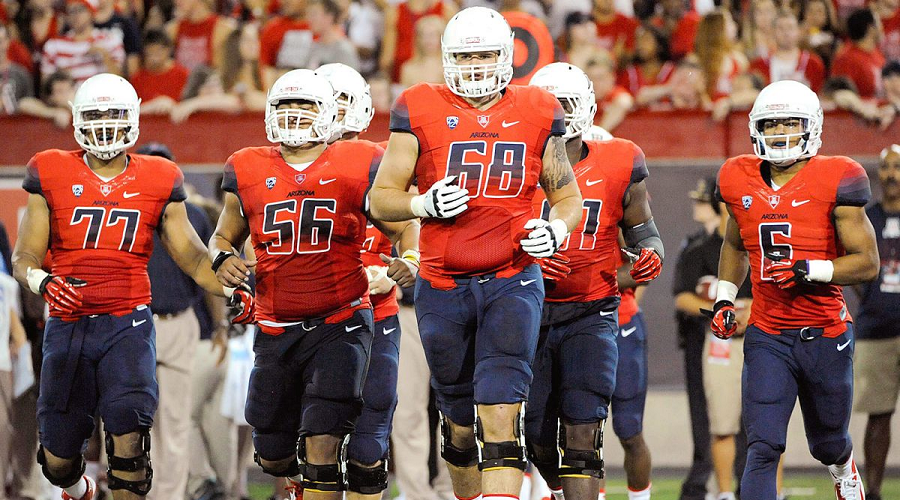 Arizona and Utah are surprise packages, going by the fact that they are ranked at No. 20 and No. 21 respectively in the current polls are undefeated so far. Still, in terms of depth of talent (on paper), the Bruins are loaded up better than both the Wildcats and Utes, hence they should have the upper hand in the odds to win such games. As for the UCLA-USC rivalry, well, let’s address that in the section below.

The Bruins Own the LA Rivalry

QB Cody Kessler and the USC Trojans (currently ranked at No. 6 in the polls) are undoubtedly the biggest regular-season test for the Bruins. The fact that the two Los Angeles teams will be meeting on November 28th in a regular-season finale, which will take place in USC’s backyard, makes the game even more challenging and crucial. 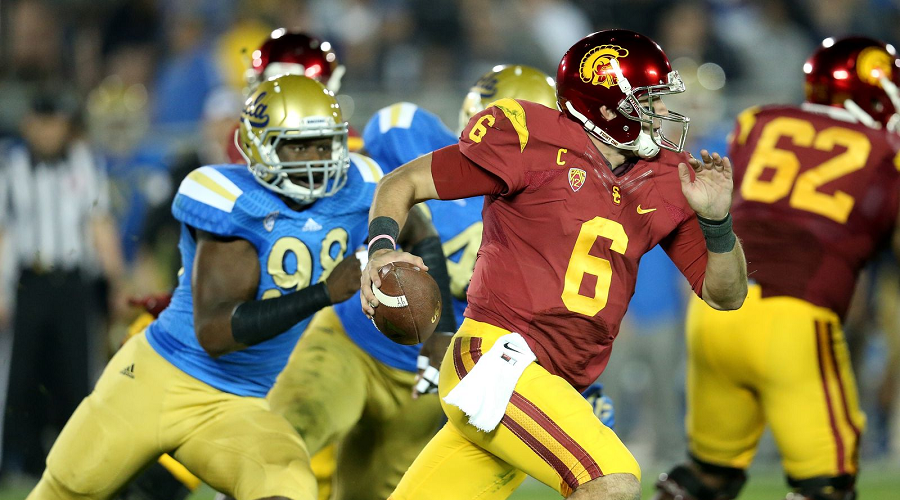 Fortunately, the Bruins have won the past three matchups against USC. Given that coach Mora has never lost to the Trojans in his time in charge of the Bruins, there is great hope that UCLA could once again beat USC in this all-important game at the end of the season.

With just two games under his belt, it would probably be too early to give solid judgment about Rosen and what he brings to the team. Even so, it is safe to say that a good number of questions about the slack in the QB play, following the drafting of QB Brett Hundley, have been considerably answered by the five-star recruit. 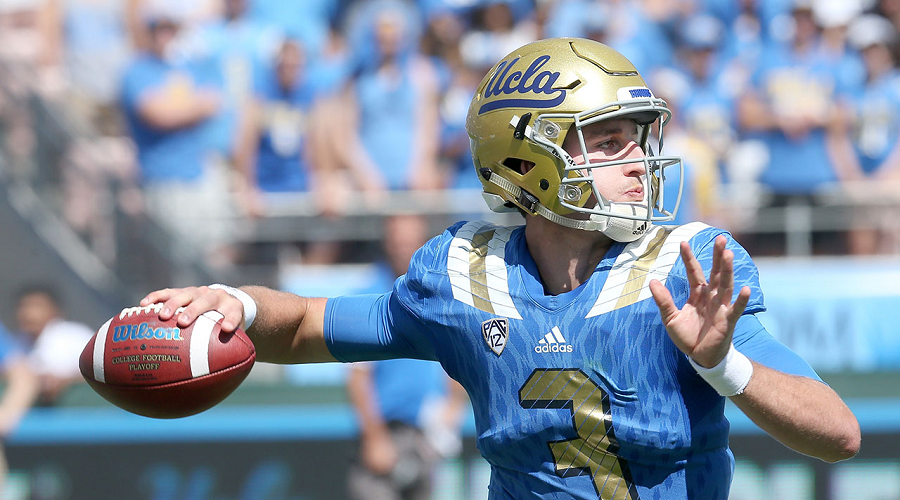 After throwing for over 300 passing yards and 3 touchdowns in his ULCA debut against the mean Virginia defense, Rosen followed it with a decent showing against UNLV, throwing for a TD and over 200 passing yards. In total, the young QB has so far thrown 574 passing yards and 4 TDs for a QBR of 77.3. No doubt, his numbers are not awe-striking like those of seniors like Trevone Boykin and Kessler, but being a 2015 recruit who is just getting started, he’s certainly shown enough potential to lead the team when it matters most.Not to mention, in his three years as a starter at St. John Bosco High School, the 6-foot-4 quarterback racked up 8,473 passing yards, 90 TD passes, leading his football team to the top of the national rankings. 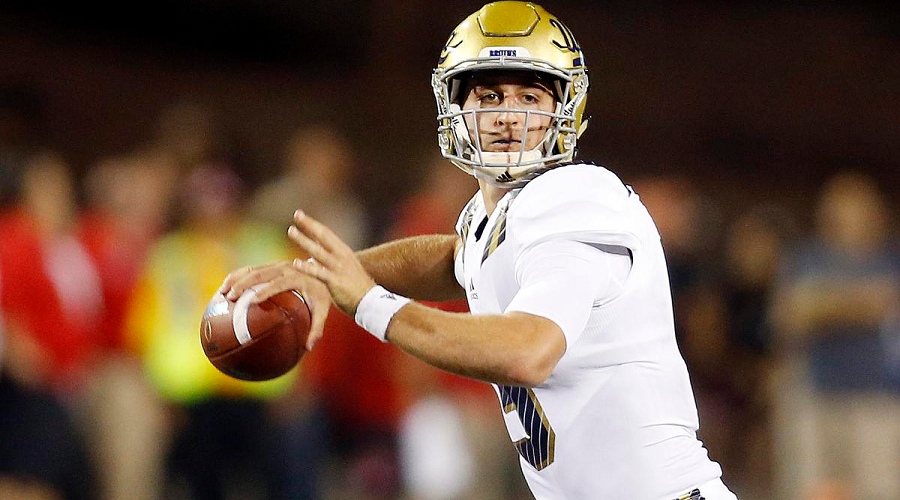 Plus, for all naysayers talking about Rosen’s inexperience, remember that four of the last five college football national champions had first-year starting quarterbacks.And if his talent won’t be enough, then the support he gets from his teammates should be enough to help him cover the needed winning distance.

One of Rosen’s biggest targets this year is RB Paul Perkins, a player who is coming off a splendid year where he led the Pac-12 in rushing at 1,575 yards. Already, Perkins is showing is value in the team this year, as he leads UCLA with 210 yards and two TDs on 32 carries from the first two games. Meanwhile, returning wideout Jordan Payton leads the wide receivers with 124 yards and a TD on eight receptions. Added to returning WRs Thomas Duarte and Devin Fuller, all who had more than 400 receiving yards last season on limited roles, the offense has more than enough talent to support Rosen and maintain the explosiveness that helped them average a national-leading 446.24 yards in total offense last season. 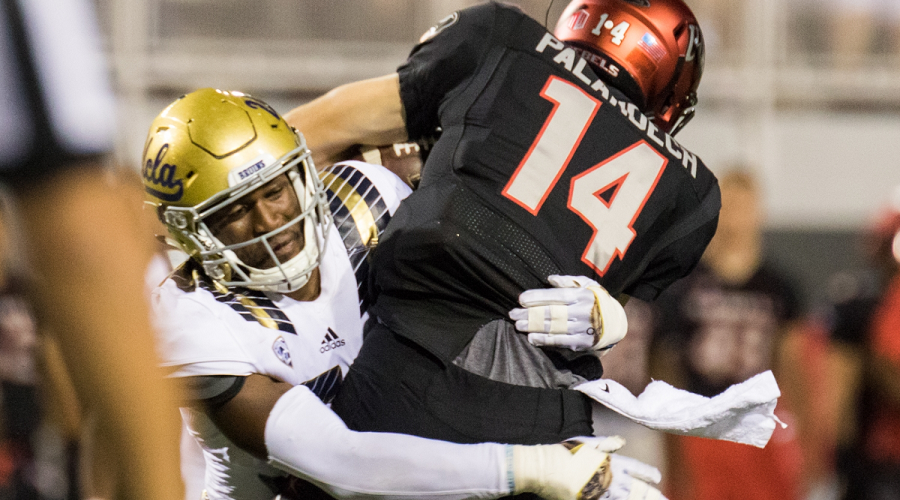 Defensively, the absence of defensive end Owa Odighizuwa, linebacker Eric Kendricks and CB Anthony Jefferson has not been felt so far, as defensive end Takkarist McKinley and linebackers Deon Hollins and Myles Jack have been able to take care of things quite well, limiting their first two opponents to 19 points combined (an average of eight points per game). Added to the budding talents of highly-rated recruits like DE Keisean Lucier-South and OG Fred Ulu-Perry, it doesn’t look like first-year defensive coordinator Tom Bradley and the Bruins will be struggling that much on the defensive side of things this year. Mind you, this is a Bruins unit that ranked sixth-best in the country in 2014 at stopping the explosive drive, and is currently looking much better than it did last year. 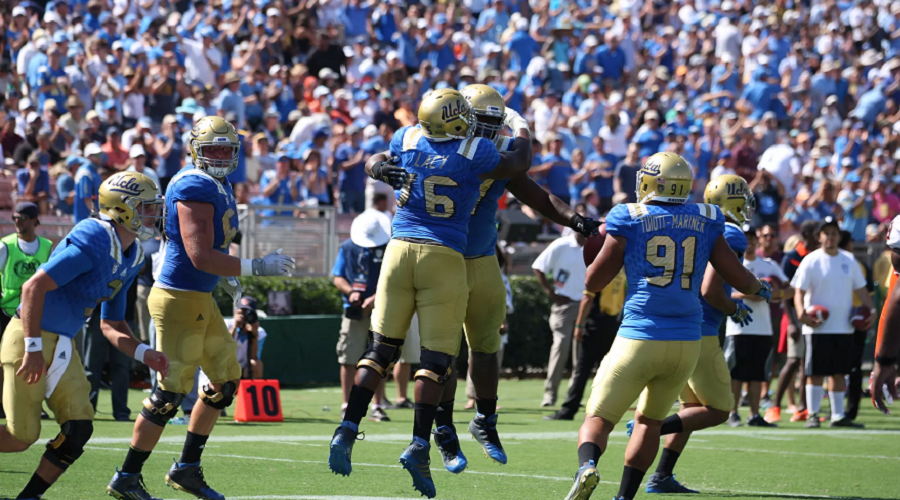 The brutality of the hotly-contested Pac-12 South division and Pac-12 conference game are challenging factors that will make UCLA’s dream of reaching the playoffs very hard. Nonetheless, UCLA has sufficient tools at its disposal, both on the coaching realms and the football talent on the field, which should give the team a fighting chance. If Rosen can continue to produce and the defense also maintains its bend-don’t-break reputation, the Bruins could find themselves celebrating of making a playoff berth, as bettors get paid handsomely for trusting them to do so.
Older post
Newer post