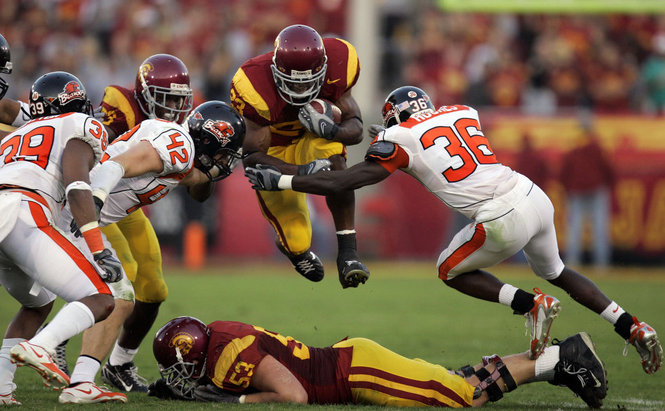 NCAA Football Betting News
Following the disappointing loss to Boston College last week, the USC Trojans will be keen to get a victory when they meet the Oregon State Beavers. Despite the loss, USC leads the latest college football odds as 11-point to win the game. For the Beavers, there won’t be much pressure to get a victory, though they would definitely want to improve on their 3-0 record and increase their chances to get to the first national playoffs.

Why Should You Bet on the Beavers

The Beavers are enjoying an undefeated record courtesy of wins against San Diego State, Hawaii and Portland State. However, the last time the Beavers played at the Coliseum, they lost 42-36 to USC. Even more, the Beavers haven’t won a game at the Coliseum since 1960, so while the team is currently unbeaten, their ominous record in Los Angeles will be lurking at the back of their minds when they face-off the Trojans.Nonetheless, fans of Oregon State will be happy to note that their ace QB Sean Mannion has been in red-hot form and his splendid performance is constantly on the rise. Just recently, his 27 yard pass to Hunter Jarmon broke the 11, 249 passing yards record that was set by Derek Anderson a decade ago. More impressively, his 11, 339 passing yards is the all-time third best Pac-12 record behind USC’s Carson Palmer (11, 818) and Matt Barkley (12, 274).In addition, the Beavers have an average of 31.7 points per game this season, outscoring their rivals by an average of nearly 15 points per game. With a 6-2 record in their last eight road games and a strong defensive unit that has been a thorn in the flesh for most quarterbacks, the Beavers may just pull a surprise victory.

Why Should You Bet on the Trojans

Though standing at No. 18 in the AP Poll and having just lost to Boston College, USC is more than capable of getting a win over the Beavers. Preliminarily, the Trojans have had more time to rest after the bye week, so they’ll be very fresh for Saturday’s game. According to the USC’s Coach Steve Sarkisian, the team has learnt from their mistakes and will prove that they are worthy contenders of Pac-12 by giving everything to win against the Beavers.Like he’s shown countless times, QB Cody Kessler had a solid game against the Eagles, completing 31 of 41 passes for 317 and four TDs. If he can get more offensive protection and avoid being unnecessarily sacked, the Trojans will greatly benefit from Kessler’s tireless and committed nature.Having been outgained 452-20 on the ground by Boston College, it is very elemental that USC’s rushing defense is improved. Remarkably, the Trojans have an 8-0 record, which dates back to Sept. 1996, at the expense of the Beavers. It therefore goes without saying that the Trojans have an upper hand when they meet the Beavers. Of course, football does not care much about history, so the Trojans will have to work on their weaknesses if they are to beat the strong Beavers.

Despite enjoying a good winning streak, the Betting lines and odds have it that the Beavers’ poor record in the Los Angeles Memorial Coliseum will once again work against them. As a result, the Trojans will snatch a victory and end the Beavers’ 3-0 run.  Additional college football odds and spreads for this game can be found at Mybookie.ag.
Older post
Newer post