NCAA Football Betting News
NCAAF betting enthusiasts have high expectations for their programs as the 2015 college football season is approaching. Although the season is still a couple of weeks away, it is fascinating to project how the upcoming season will play out on the field, specifically in the LA rivalry and battle of supremacy between USC and UCLA. Both the Trojans and the Bruins had standout recruiting classes in the offseason and it would be amazing to see how the two Pac 12 South schools revisit their annual rivalry on Saturday, Nov 28th, at Los Angeles Memorial Coliseum.

Making a Case for USC Victory

The Trojans have one of the best explosive offenses in the country. QB Cody Kessler, who had an impressive season last year as a junior, leads the USC attacking line. Kessler completed 69.7 percent of his passes as he throw for a stunning 39 TDs against just five interceptions. Additionally, Juju Smith, the team’s new promising wide receiver, could blend well offensively with Kessler, even against the toughest of defensive lines. With the experienced WR Steven Mitchell and CB Adoree’ Jackson also returning to the starting lineup, USC will be highly motivated to stick it against the Bruins, who’ve been recently dominant in the rivalry. Plus, even though USC will miss the services of Javorius Allen at tailback, the program can rely on Tre Madden and Justin Davis as a new complementary pair. Defensively, the Trojans suffered a big blow, as they lost leading tackler Hayes Pullard and All-American DT Leonard Williams, which could easily have a negative impact on the D-line. Still, not all is lost for USC, as the new All-star candidate Su’a Cravens, who led the team last season with 3 interceptions and 17 tackles for a loss, is still available in the defensive lineup this year. After Cravens finished last season as the leading All-Pac-12 hybrid outside linebacker/safety, he should be able to offer leadership to the rest of the players in the D-line.

Making a Case for UCLA Victory 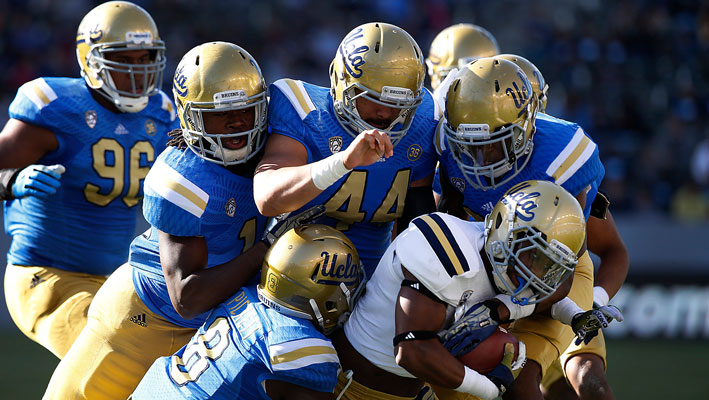 The Bruins have won the past three matchups against the Trojans, making them the hottest favorites to rule LA once again in 2015. Besides the LA rivalry, they enter into 2015 season under Jim Mora with a soft schedule that could see them win the Pac 12 title. Nonetheless, the Bruins have uncertainties at QB. After his three successful years with UCLA, QB Brett Hundley moved on to the NFL, leaving a well-established offense, but with a gaping hole at its most important position. Reportedly, UCLA has a serviceable replacement for Hundley in Josh Rosen, a 5-star recruit who is regarded as one of the hottest QB prospects in the country. Although Rosen may take awhile to acclimatize at the program offensively, he will have an experienced offensive line with five regular starters to protect him, and the enviable support from RB Paul Perkins, who led the conference in rushing yards last season. In the defense, the Bruins lost some players as well and life could be difficult, as they seek to adjust to the loss of top defensive trio of CB Anthony Jefferson, defensive end Owa Odighizuwa and linebacker Eric Kendricks, all who were drafted into the NFL. Despite the departure of the trio, UCLA will still have a chance for a strong defensive showing, going by depth of the remaining talents. With a pair of linebacker Deon Hollins, Myles Jack and defensive end Takkarist McKinley in the defense this year, the Bruins could try build on their strong finishing to last season and perform even better than last year.

Although the Trojans have acquired more new players though the offseason, head coach Steve Sarkisian has had a tendency of finding it hard to turn the new talents into great superstars, a problem that could repeat this year. For UCLA, Jim Mora has yet to lose a rival game to the Trojans in his first three seasons with the Bruins. All factors considered, there’s no doubt that Mora has some sort of winning formula that he will be using against the Trojans, so a win looks most likely for them. Even so, if there’s ever a chance for USC to stop the recent Bruin dominance, it will be this year, as the Trojans offensive line is one of the strongest and deepest units in the nation.
Older post
Newer post