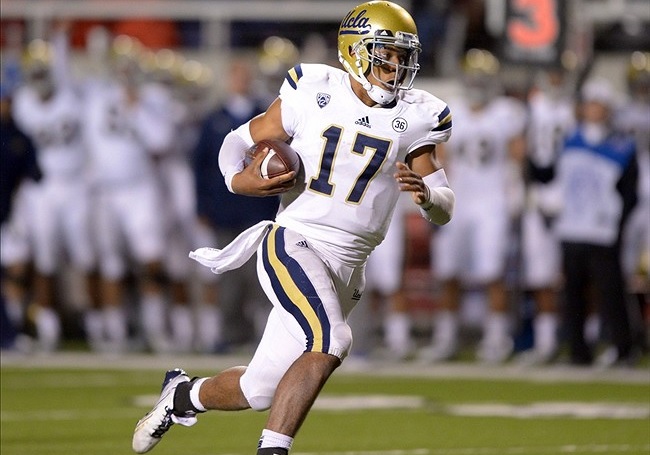 NCAA Football Betting News
This coming Saturday, Utah will be hit the road and heat to the Golden State to face-off the mighty UCLA Bruins, who enter this game as double digit favorites in the existing college football betting lines. For the Utes, the game will be an opportunity to avoid a 0-2 conference season start and get back to winning ways following their marginal defeat against Washington State last week. As for the Bruins, the game is a chance to improve their 4-0 record before they travel to Oregon on Oct. 11 for a must win Pac-12 battle against the No. 2 Ducks.After an impressive 3-0 start to the season, the Utah Utes suffered their first defeat last week losing 28-27 to the Washington State. To many Utah fans, this reverse is something they would really want to put behind considering that at some point in the game, the Utes were pounding Washington ad leading the game by 21 points. Meanwhile, UCLA is boasting of an unbeaten 4-0 record following their 62-27 thrashing of the Arizona State last weekend, and continue growing as one of the strongest and most effective teams in the Pac-12 conference. Below are some of the key issues, odds and other info that bettors should consider when putting their money on either of these Pac-12 South teams.Game: Utah Utes vs. UCLA BruinsVenue: Rose Bowl Stadium, Pasadena, CaliforniaDate: Saturday, Oct. 04, 2014Time: 10:30 PM ETTV: ESPN

Despite the laudable 3-1 start to the season, the Utes are 1-4 SU in their last 5 games on the road and 3-6 ATS in their last 9 games away from their home stadium. Therefore, in order to get a victory in Rose Bowl, they will have to work extra hard. Nonetheless, running back Devontae Booker, Bubba Poole and QB Travis Wilson have been very good so far at combining their runs offensively and carrying the ball effectively. If all these players can keep their heads cool and focus on the game, they can be a big threat to UCLA’s defense.In addition, Utah’s aggressive defense, led by Nate Orchard who already has 4.5 sacks this season, will not be easily outplayed by the Bruins. So, even though there is still some fine-tuning that needs to be done offensively, the Utes can find a way to victory if their defense stays tenacious as it has done in the previous games and limit the Bruins’ offensive.Game Odds:UTAH: +13-110UCLA: -13-110Unquestionably, UCLA’s drubbing of Arizona State was a strong statement about how they mean business this season. Even more remarkably, the Bruins are 5-0 SU in their last 5 games and 7-1 SU in their last 8 home games. So, when the team faces Utah in their own backyard this Saturday, the fans will be expecting nothing less than a victory.If there’s one man who will crucial for a UCLA victory, then it is QB Brett Hundley. In Washington, just like most of his previous games, Hundley was in spectacular form. Of course, this was mainly possible because he had a good support system from the ball carriers. When the Bruins play against Utah, they should take advantage of Utah’s rather poor capacity of moving the ball through the air. By doing so, they can easily stretch out the Utes in the same way they did in last season’s 34-27 win against them.

Last season, in Rice-Eccles Stadium, Wilson was intercepted six times by UCLA’s defense, which led to 17 UCLA points and contributed to their loss 34-27. If his team is to get anything out of Saturday’s game, a better performance will be required from him. As for the Bruins, everything seems well set for another victory. With a few improvements in the defense, the win should be most likely, if not certain for them. Now, that does not mean they’ll beat the football betting lines and cover the 13-point spread. My take, Utah will start strongly, but UCLA will eventually carry the day, but not by a long margin of points.
Older post
Newer post