NCAA Football Betting News
The 2015-16 college football season is almost coming to an end, but we must first go through Week 12, as we seek to find the teams that will challenging for the top NCAAF betting honors in the nation. Among the teams still seeking to end the season on a high note are the Tennessee Volunteers (6-4) and the Missouri Tigers (5-5), who will be meeting in Columbia this Saturday. This game marks Tennessee’s last game on the road this season and their second last of the regular season, so a win will be very crucial if they are to boost their chances for a bigger bowl game. The Tigers, meanwhile, are seeking bowl eligibility, but more importantly, they’ll be hoping to give their head coach Gary Pinkel a good send off, given that he is set to resign at the end of this season for health reasons.With so much to prove in online NCAAF odds, here is our brief betting preview of this game, including free picks for your consideration.

The Vols are headed to #Missouri today. Ready for some football pic.twitter.com/SWcVXUjCPr

Setting the Scene for Tennessee vs Missouri

This encounter marks just the fourth time these two meet, with the Tigers having a 100 percent winning record over the Volunteers in all their past three meetings. In their last meeting in 2014, the Tigers beat the Volunteers 29-21 in Knoxville. Can the Tigers continue in their dominant ways, or will the Vols finally get their first win over Mizzou?

Betting on the Tennessee Volunteers

The Volunteers have already made the bowl eligibility with a season record of 6-4 and will just be looking to improve on their bowl positioning. They enter this game after an impressive display in their last game, whitewashing the Mean Green 24-0 in Week 11, marking their third win in a row.In their quest for a fourth win in a row, against a tricky Tigers side no less this Saturday, the Vols will look up to their offense that is averaging 34 points and 421 yards per game and has turned the ball over just 12 times this season. This attacking unit is led by quarterback Joshua Dobbs, who has completed 59.1 percent of his passes for 13 touchdowns this season against five interceptions. Josh Malone, who has 27 receptions, and Von Pearson, who has 26 receptions, are Dobbs’ top targets, meaning they’ll be the players to watch in the aerial game.In the rushing game, which is their most potent attacking side, Dobbs has decently contributed 7 rushing touchdowns this season. The rushing game is, however, led by Jalen Hurd with 887 yards and 10 touchdowns.Talented as this offense, it won’t be easy for them this Saturday, as it will be facing perhaps its toughest opposing defense in Missouri, a unit that is allowing just 14.7 points and 297.7 yards per game this season, and has tallied eight interceptions, seven fumble recoveries, and 27 sacks. To overcome this stout unit, they will need to be sharper than they have ever been this season.Defensively, the Vols are led by Jalen Reeves-Maybin who has 89 tackles, Brian Randolph who has 55 tackles, and Derek Barnett who has seven sacks. This defense could prove pivotal in helping out the offense, bearing in mind that they will be facing a lackluster Missouri offense is scoring just 15.2 points and 297.7 yards per game this season, offering the Vols a chance to stay in the game as long as possible.

Betting on the Missouri Tigers

Missouri have been on a bad run of results this year, winning just two of the last seven, and just one in five. However, in Week 11, they managed to put to halt their four-game losing skid with a 20-16 win over the Cougars.The Tigers will be hoping to build on that win this Saturday for a second straight win in a long time this year. To do so, Quarterback Drew Lock, who has completed 51.9 percent of his passes with four touchdowns and six interceptions, will need to find some sort of rhythm against Tennessee’s bend-don’t-break defense. J’Mon Moore, who leads the team with 26 catches, will be the player charged with the responsibility of spearheading the wide receivers. The rushing game, led by Ish Witter with 457 yards, must also step up, especially in moving the chains.Notably, though the Vols haven’t been a defense-first team, they have impressively restricted their last four opponents to an average of 16 points. Against a Missouri side that averages less than 16 points per game, this will certainly be a tough test.In the defense, there is much more hope, as the Tigers have one of the best D-lines in the country, as was earlier mentioned. This defense is led by Kentrell in the tackles with 128, with Michael Scherer complementing him with 75 tackles and Anthony Sherrils adding up 56 tackles. But even with their resoluteness, it remains to be seen how they’ll handle the Vols offense that has scored 103 points in its last three games, all which have ended in wins. 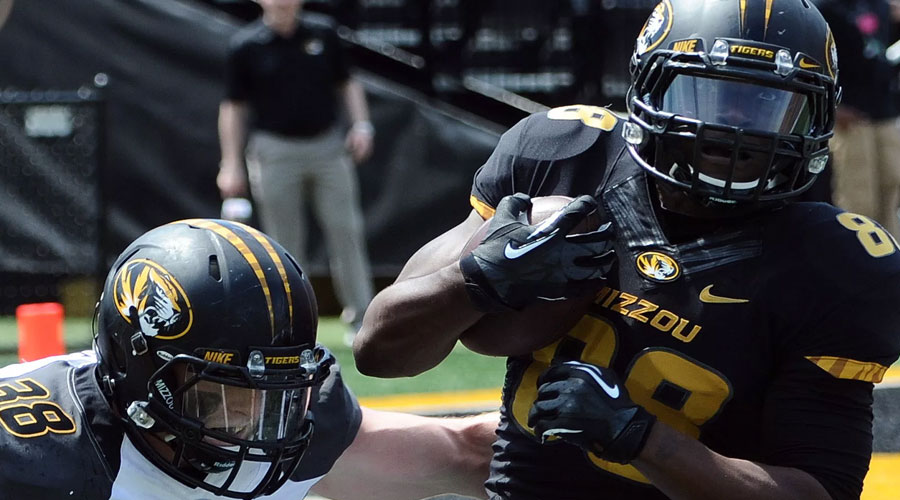 The Volunteers have disappointed this season as they were expected to be title contenders, yet all they are left with now is to try and fight for a better position in the bowl. More notably, they have one of the longest injury lists in the nation, one that could easily affect their performance in this game. Meanwhile, the Tigers haven’t fared any better, but they played a very emotional game against BYU in Week 11, and if they bring the same intensity to this game, they’ll have a winning chance. All in all, expect a low-scoring affair, considering the Vols have perennially struggled against stout defenses, so an UNDER should be your preferred pick in the total lines. Winning-wise, the game could go either way, though after Tennessee managed just 24 points at home against a weak Marshall defense last week, we feel that the Tigers will be able to make enough stops to claim a narrow home upset win this Saturday, making it four on four against the Vols. Free NCAAF Picks: Missouri for SU and ATS, total goes UNDER.
Older post
Newer post