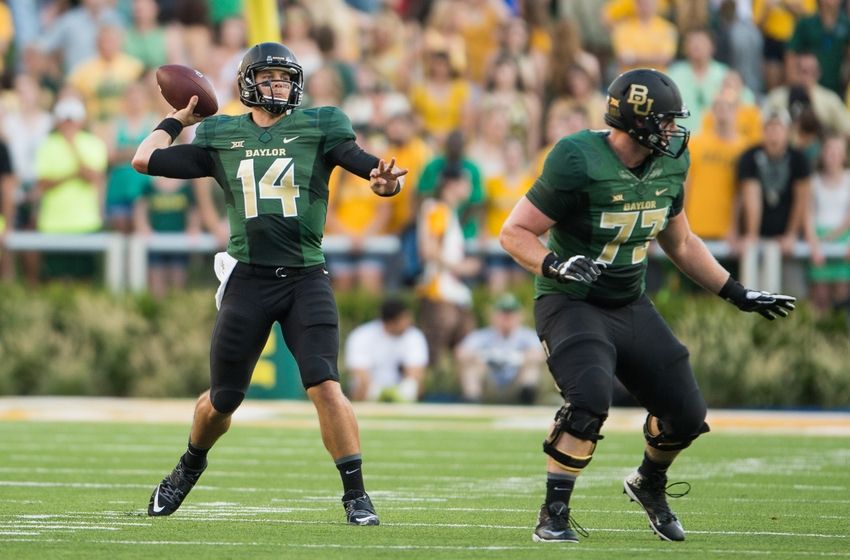 NCAA Football Betting News
There have been plenty of memorable games this college football season, but perhaps none as dramatic as the 61-58 win that Baylor had over TCU a few weeks back. Trailing by 21 with a little over 11minutes to play, the Bears rattled off 24 unanswered points to complete the comeback win. They are unlikely to require any such dramatics this weekend when they take on the cellar dwellers of the Big-12, the Kansas Jayhawks, and the football spread for this game is a solid proof of that.
Date/Time: Saturday, November 1, 4:00 PM
Location: McLane Stadium, Waco, Texas
A funny thing happened to the Baylor Bears after that huge win against TCU, and it was something that so often happens after such dramatics: they lost. Riding on a high after the win, the Bears welcomed in West Virginia and were unceremoniously dumped 41-24. Thoughts of a playoff spot took a real hit after that loss, but they have had a couple of weeks off to think about things, and perhaps the perfect opponent to help them get things back on track. Kansas have just not been very good at all this year, and their 2-5 record includes a 0-4 mark in conference play. They are in the middle of a 4 game losing skid and were likely happy to see that bye week come along when it did. That said, it probably was pretty tough to rest when they looked at the calendar and saw that a wounded Bear was going to be their next opponent. You have to wonder of their best chance of getting out alive in this one is to roll over and play dead.

Not surprisingly, the line in this game is pretty big, with Baylor coming in as 35.5-point home favorites. Their ATS record is just 4-2-1 this season, but there is a rather startling trend that cannot be ignored here, which I will reveal in just a moment. Game Odds: KANSAS: +35½-110 BAYLOR: -35½-110 Kansas have a 3-4 record ATS this season, and they did manage to cover when they were a road dog over 21.5 points, which was against West Virginia. That could all be for naught, though, especially when you take a look at what Baylor has done in the past. I love to find trends that jump off the page at you when you are trying to make a decision whether to play or not. Baylor are not just 22-10 ATS over the past 3 seasons, they are also a very nice 20-7 on games played on turf during that same time period. A wounded bear against a flightless bird is just no match, which is why I like Baylor and that big -35.5.
Older post
Newer post